On November 14, 2009, we brought home a cat that would be both the best and worst adoption decision we ever made. Of course, I’m talking about Chris. He turned our house upside down for years but he also has been the most loving and affectionate pet we ever had. The funny thing is, we took more time deciding to adopt Chris than some people take to decide to adopt a human child.

I first encountered Chris on September 24th or 25th of that year when I was a volunteer for a local cat rescue organization. He was up for adoption at Petsmart and I was cleaning the cages there that morning. I let out every cat on the top row and as I was cleaning the cages Chris jumped on my back and proceeded to climb onto my shoulders. Once there, he started licking and biting my ear and my nose.

We already had four cats at the time (Abbey, Alex, Tigger and Flash) and didn’t need another one. There was also another cat at the shelter, Kinsey, who was also a shoulder climber and one my wife and I both liked, but we had a belief at the time that gold cats made exceptionally good pets.

The organization that had Chris was called Sav-R-Cats and they rotated with two other shelters at the Myrtle Beach Petsmart. I think each organization got two weeks there. Chris was back at their shelter on October 3rd when I brought my wife, Rose, to see him. 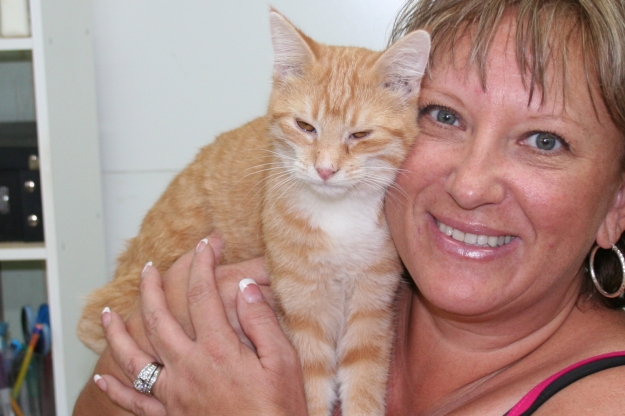 Chris at adoption center with Rose.

They hit it off very well but we were not ready to adopt another cat at that time, especially since we had to go back to Tampa for a week-long cruise that I booked when we lived there. I picked a Tampa cruise so we wouldn’t have to drive far.

Another six weeks would pass before we would decide to take Chris home. At one point, either before or after my first encounter with him, someone adopted Chris and returned him the next day because he annoyed them all night by biting them. If they hadn’t brought him back, I would probably not be blogging today.

To celebrate Chris’s Gotcha Day, I made his ebook, “Bad Cat Chris; The Baddest Cat You’ll Ever Love” free for three days, starting today. This book is a condensed version of this blog with some added material. It chronicles the ups and downs of our life with Chris from the beginning until the middle of 2013. It was a very difficult and rewarding time for us. Thankfully, or not, Chris has mellowed some since then but we still can’t let him sleep with us because he is still a biter.

If you do read his book, I would love it if you would write a review on Amazon.

Happy Fourth of July to all our American friends and we hope everyone else has a great day too. 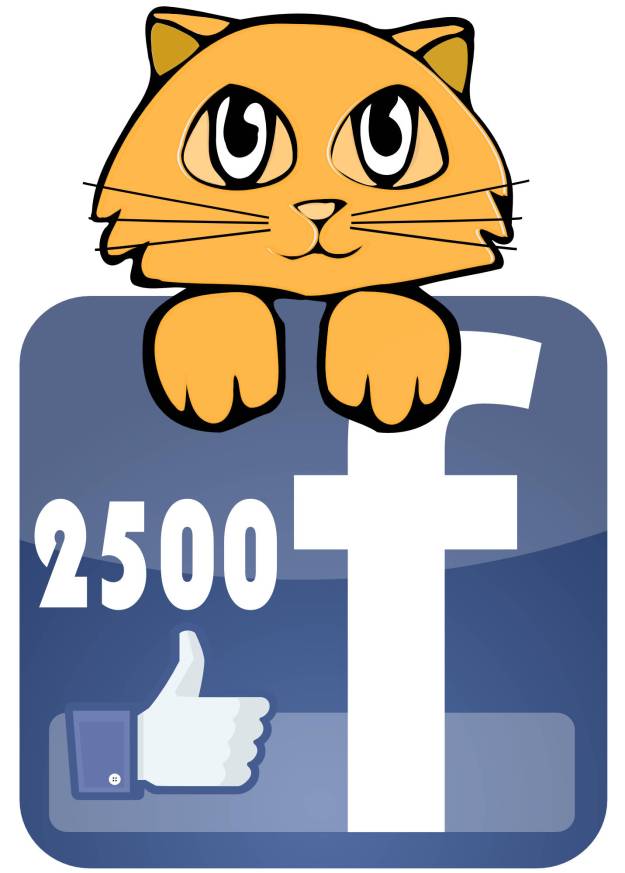 Today is Chris’s sixth birthday. Actually, we don’t know his exact birthday but he was about six months old when we adopted him so I thought we would just celebrate his birthday six months from his adoption day. I thought it would be fitting to re-post some pictures of him at each year in his life.

This is Chris between Alex and Tigger in November, 2009.

Chris between Abbey and Tigger, February, 2011 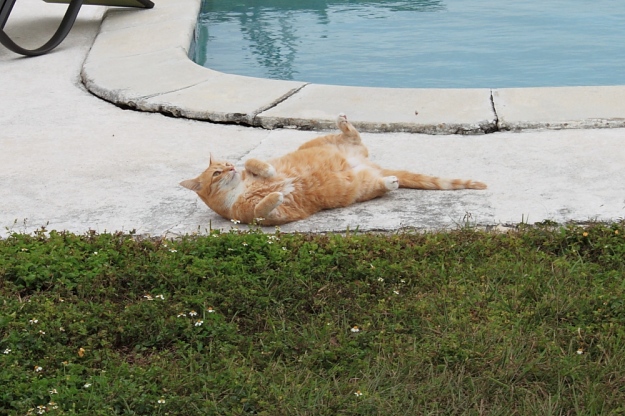 Chris at the pool showing off his expanding belly, November, 2013

Chris showing he can still be bad, October, 2014

Chris with Frankie, showing off his catch, March, 2015

Unfortunately Chris has been sick with a cold and we have to work all day and then go to a wedding this evening so he won’t get the attention he deserves. Perhaps I will leave the bedroom door open for him tonight.

Chris is one of those cats that continued to play like a kitten well into adulthood. Lately, however, the kitten in him did not come out very often. That changed the other day when Rose found a mouse under the refrigerator. It was a small mouse that I had never seen before. It must have found its way under the fridge shortly after coming out of the package.

I don’t know what is different about this mouse than all his other mice but he plays with it like he is a kitten again, and after several days, he has not become bored with it. I still see him chasing that thing around several times a day. It’s nice to know my lovable “bad cat” has not fully grown up yet. 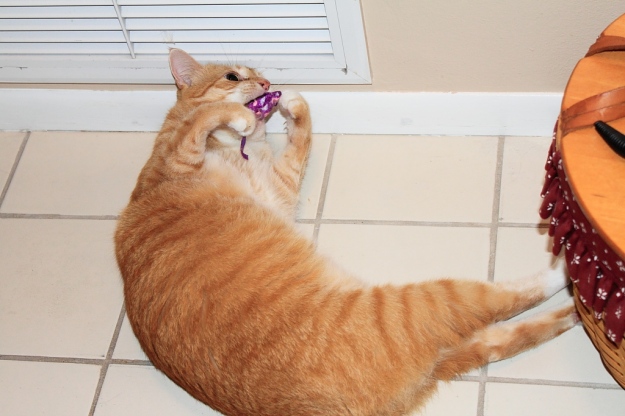 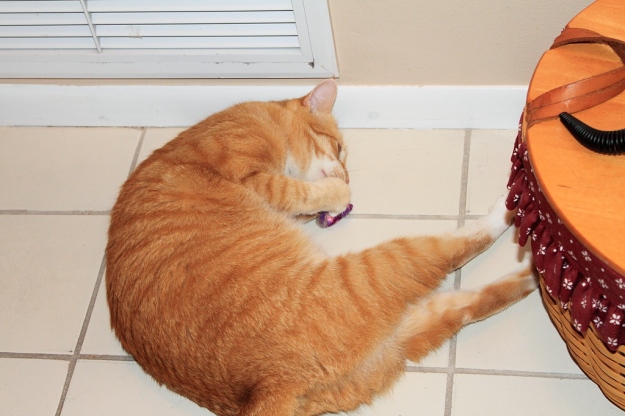 I don’t know exactly how old Chris is but I wanted to set a date to celebrate his fifth birthday. I decided that since he was about six months old when we adopted him I would celebrate his birthday on the date six months from his adoption date. Unfortunately I had it in my head that it was near the end of November but it was on the 14th. Oops!

Chris at adoption center with Rose.

Chris and family would like to wish you all a happy and safe Easter.

I decided to do a little extra good this Christmas and donate all royalties earned in December from my Kindle book, Bad Cat Chris, to the shelter where I found Chris. It is a no-kill shelter located near Myrtle Beach, South Carolina called Sav-R-Cats.

I was inspired by Gwen Cooper, author of Homer’s odyssey. When her new book, Love Saves the Day, came out in paperback, she donated 200% of the royalties earned for a specific time to Blind Cat Rescue & Sanctuary, Inc. I’m not sure I can afford 200% right after Christmas but I can surely give 100% to the shelter that gave Chris the opportunity to find a loving home.

The book sells for only $2.99 and my royalty for each book sold is about $2.07, in most cases. Any help that you can give, by either buying the book or spreading the word, will be appreciated by myself and by the kitties that you help.

Please note: The links in this article are for Amazon.com. If you live outside the United States, you may need to look for it on your country’s Amazon site.

Wanna know a secret? This is the 100th post on Bad Cat Chris. 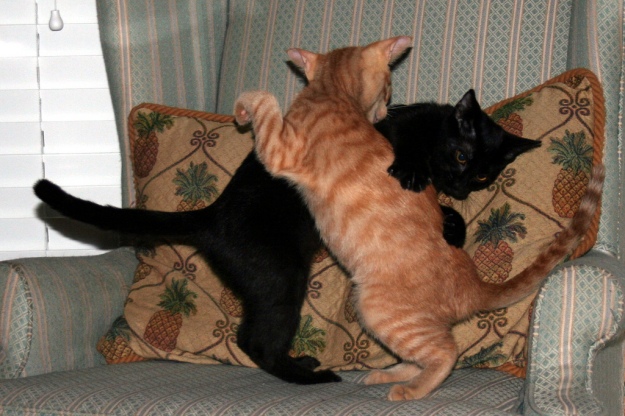 This makes me want to dance. 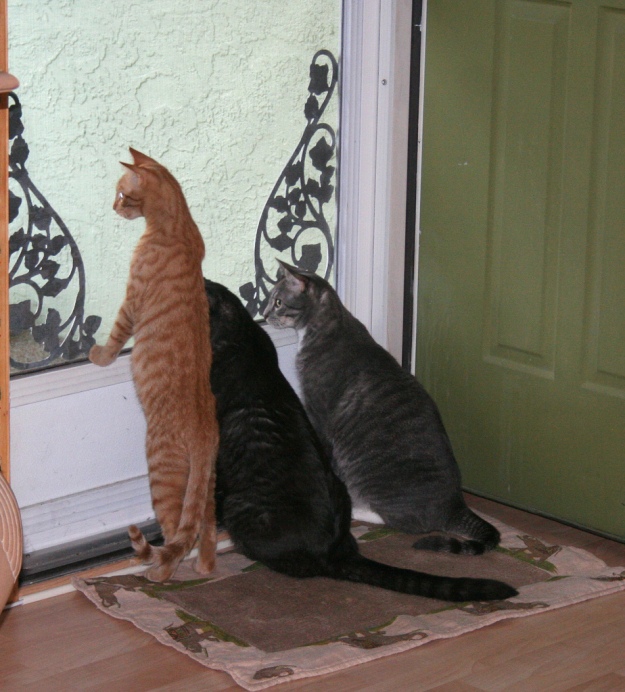 The party’s about to start. Where is everybody?

We’re coming. Don’t start without us.

Well, my 100th post is finally here. It has taken longer than expected to reach this milestone but my busy life has left me less prolific than I would like. Even so, I a so glad I started this blog for several reasons.

First and foremost, it introduced me to a community of wonderful, caring and compassionate people with helpful advice and interesting stories to tell. I also discovered how much I love to write.

I would like to take this opportunity to point out a few things worth mentioning about this blog.

I want to thank all my readers for sticking with me and especially those who have left me likes, coments or have shared my work. I also want to thank everyone who has left a comment about my book, Bad Cat Chris, on Amazon. I hope you have enjoyed the blog so far and I will see you at 101.

Chris’s book, Bad Cat Chris: The Baddest Cat you’ll Ever Love, will be free on kindle today and tomorrow only. Amazon allows only five free days per 90 day enrollment in their KDP Select program. I already used three of those days, and since I don’t plan to re-enroll in the program, this may be the last chance to get it free. If you haven’t already picked up a copy, you can get it by clicking here.

I just want to ask everyone a big favor. Please, please, please, if you have read the book or plan on reading it, I would really appreciate a review on Amazon.

A good part of the book is taken from this blog and there is some added material as well. It is less than 30,000 words and can be read in one good sitting. Best of all, you don’t need a Kindle to read it. You can get an app for just about any device you have.