Recently we won the book Catify to Satisfy (by Jackson Galaxy and Kate Benjamin) from the blog The Cat on my Head. A package from Kitties Blue arrived the other day, sooner than expected.

I have been too busy to read it but I did flip through it and it looks like there are some great ideas for cat furniture and such. I am not the carpenter type so I will have to report on what can be done by dummies.

When are you going to make us something, Dad?

Along with the book was a nice card from the gang.

The best part, for the cats anyway, was the package of catnip that was included as a special gift. They really loved it. 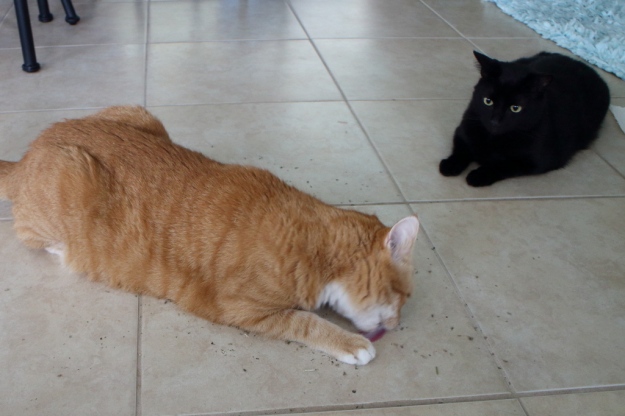 Thank you to Janet and all the kitties, Lily Olivia, Mauricio, Misty May, Giulietta, Fiona, Astrid, Lizabeth, and Calista Josette. 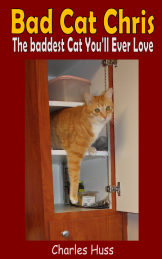 I decided to do a little extra good this Christmas and donate all royalties earned in December from my Kindle book, Bad Cat Chris, to the shelter where I found Chris. It is a no-kill shelter located near Myrtle Beach, South Carolina called Sav-R-Cats.

I was inspired by Gwen Cooper, author of Homer’s odyssey. When her new book, Love Saves the Day, came out in paperback, she donated 200% of the royalties earned for a specific time to Blind Cat Rescue & Sanctuary, Inc. I’m not sure I can afford 200% right after Christmas but I can surely give 100% to the shelter that gave Chris the opportunity to find a loving home.

The book sells for only $2.99 and my royalty for each book sold is about $2.07, in most cases. Any help that you can give, by either buying the book or spreading the word, will be appreciated by myself and by the kitties that you help.

Please note: The links in this article are for Amazon.com. If you live outside the United States, you may need to look for it on your country’s Amazon site.

Chris’s book, Bad Cat Chris: The Baddest Cat you’ll Ever Love, will be free on kindle today and tomorrow only. Amazon allows only five free days per 90 day enrollment in their KDP Select program. I already used three of those days, and since I don’t plan to re-enroll in the program, this may be the last chance to get it free. If you haven’t already picked up a copy, you can get it by clicking here.

I just want to ask everyone a big favor. Please, please, please, if you have read the book or plan on reading it, I would really appreciate a review on Amazon.

A good part of the book is taken from this blog and there is some added material as well. It is less than 30,000 words and can be read in one good sitting. Best of all, you don’t need a Kindle to read it. You can get an app for just about any device you have.

A few years ago I read the book Homer’s Odyssey by Gwen Cooper. It is about an amazing blind cat that saved the author from an intruder and survived the attacks on the World Trade Center.

This book, in part, inspired this blog. I read the book around the same time that we adopted Chris and I realized that books about special cats, like Homer’s Odyssey and Dewey, had great appeal to cat-loving readers. I thought about writing a book about Chris because I was certain his antics were just as interesting but getting published seemed impossible at the time.

I eventually decided to write this blog instead and last moth I published Bad Cat Chris as an eBook. I probably would not have done either if I had not read Homer’s Odyssey.

I bring this up for a reason. This morning I noticed a link to a Facebook page called Homer Blind WonderCat. I Thought to myself, “Wow, is Homer still alive?” I clicked on the link and saw a post from five minutes before thanking everyone for their support and sympathy. I scrolled down and four hours earlier was a post saying that Homer had to be put to sleep.

There is a link on the Facebook post to Gwen Cooper’s blog where she writes a very sad and touching goodby. I hope she takes comfort in knowing that adopting a cat that nobody wanted was an incredibly good deed that ultimately enriched the life of one cat and countless people, myself included.

I just finished the second draft of my Bad Cat Chris book for Kindle. Much of the content is from this blog but there is also a lot of added material. I would like a few volunteers to read what I have and advise me of any corrections needed as well as any advice on any improvements that can be made. I am not a professional author so any help would be appreciated.

The book is a little over 23,000 words so it is not too long of a read. If you can help, please email me at: “me at charleshuss.com.” Please forgive the cryptic email but I get enough spam. 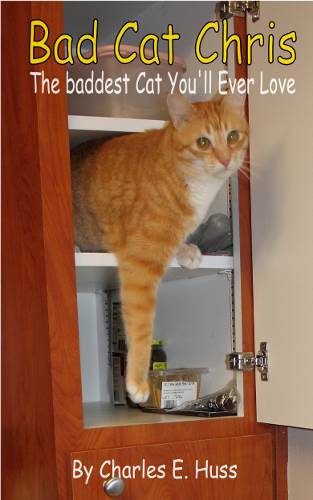 What do you think of the cover? I think I need to make the title more visible so it can be seen as a thumbnail.