My wife got up early Saturday morning to use the bathroom, which is just outside our bedroom door. In our house, this is usually okay before around 3:30 a.m. After that time, the cats congregate outside our bedroom door in anticipation of breakfast or early morning attention. On this morning, Rose missed the cut-off time by about fifteen minutes and all the cats poured into the bedroom. By 4:00 a.m., Chris was such an annoying pain that we both decided to get up.

I made coffee and cleaned the litter boxes and then noticed Puck get into the box to pee. About two minutes later I noticed him in the box peeing again and I watched him this time. I felt like a voyeur but I needed to see if he was having a problem peeing. Sure enough, the litter was dry but he still felt the need to bury it. I then watched him go in and out of the box several more times within the next ten to fifteen minutes. That is when we decided he needed to see the vet right away. We learned how dangerous the problem could be when Frankie had that problem.

We have two vets that we go to. Our preferred vet is about a fifteen minute drive from our house and our secondary vet is almost the same distance that Frankie takes me on our walks. We decided to go to the closer vet because they opened a half hour earlier than the other vet and I didn’t want to wait.

I brought in the carrier and everyone but Puck was interested in it.

I was able to get through to someone at the vet’s office at 7:50 and she told me to bring Puck in right away, so I put him in him in his carrier for the short drive over there.

We were at the vet’s door right after they opened. We only waited a short time before they put us in an exam room.

Once in the room, I opened Puck’s carrier but he did not want to come out.

I didn’t want a stranger to come in and traumatize Puck by pulling him out of his carrier so I took off the top. 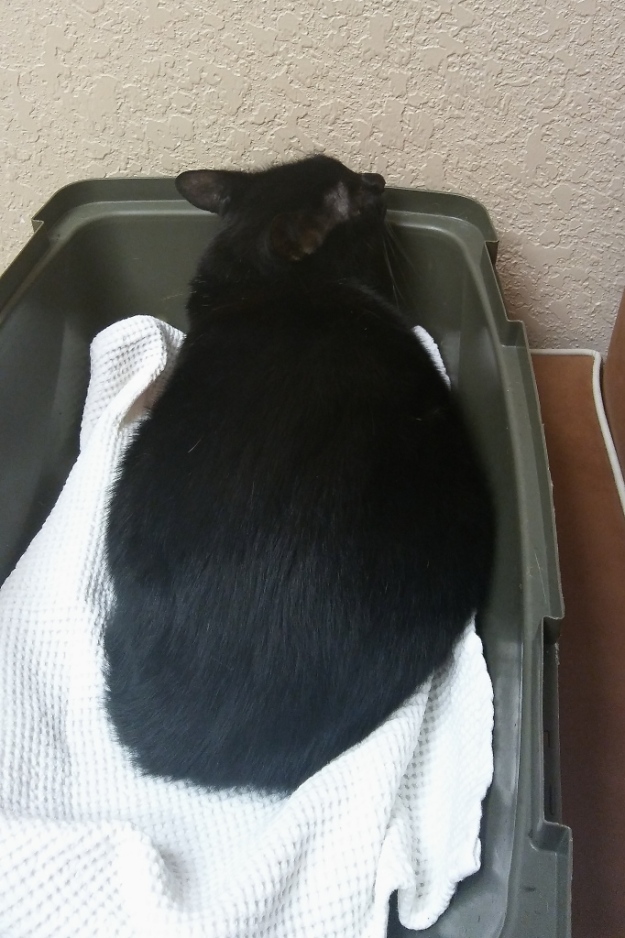 I then thought he would feel safer on my lap so I picked him up and put him there. I was wrong. He immediately got off my lap and hid behind the carrier so no stranger could walk in and find him.

When the vet tech came in, she picked up Puck and brought him into the back room. For some reason, this vet’s office likes doing most of their examinations out of sight of the pet parents. I think they are performing secret experiments back there.

After some time, the vet came in and said that Puck had a bladder infection but he was not blocked, which was good. His course of treatment was fluids along with… wait for it… steroids and antibiotics.

Those of you who have read a lot of my recent posts understand the joke. It seems every time I go to the vet I make a comment about how  I could be a vet if I only had steroids and antibiotics because all problems are solved using those two drugs. In fact, I’ve talked about it so much that I decided to compile a list of  posts where I mention both drugs in the same post.

Wow, that is a common topic. Maybe I should think of something else to write about.

Anyway, getting back to the story, when the vet tech finally brought Puck back, he was wrapped in a towel and had a strange mask on his face. At first I thought is was something like the cone of shame and was hoping that they didn’t expect me to make Puck wear this thing at home. It was then that I saw that not only was his mouth covered but so were his eyes. It was then that I realized I was wrong. They were not conducting secret experiments in the back room, they were filming Fifty Shades of Black.

I wish I had time to take a picture of Puck with that mask but by the time the shock wore off the tech was removing it from his face. She said it was to keep him calm but I have never heard of a vet using a mask in that way before.

After further research, I found something similar on Amazon. It is a cat muzzle and it is used for difficult cats to keep them from biting. I have never known Puck to be a difficult cat or a biter so maybe it it’s true and can calm a scared cat. I wonder if it would work on Floki so we can trim his nails.

It has now been over a day and I do not see Puck trying to use the box. I suppose that is good but I am never around when he does use the box and I wish he would pee when I can see him so I can confirm he is better.

Update: I forgot to mention that the vet said Puck should be eating only wet food until he is better. He also gave us a syringe to get water in his mouth a few times a day.

I have been wanting to get them off dry food for some time now because it is the primary cause of urinary disease. I feed them wet food twice a day but Chris eats almost none of it so I keep some dry food out so Chris wont starve. I do limit the amount of dry food though and am still trying to figure out how to get Chris to eat the wet so I can eliminate the dry .