Puck’s last vet visit left us with some hope. We went to a new place called The Animal & Bird Medical Center of Palm Harbor for Puck’s over-grooming problem. The vet put him on a limited ingredient diet and didn’t push the steroids and antibiotics that most vets use to solve all problems that cats have. He did suggest antibiotics as an option but did not push it. He also suggested a Feliway diffuser to help with Puck’s stress, which we bought and plugged in between the Catio and living room.

Unfortunately, after giving the diet and Feliway a good amount of time to work, we saw little improvement. I then tried changing their water and gave them bottled spring water. Puck seemed to improve slightly after that but then got worse again. I hesitated to bring him back to the vet for fear that they would use the nuclear option of steroids and antibiotics but I had to do something so I made an appointment for last Saturday.

My wife went with us this time and just as we were ready to put Puck in his cat carrier, Frankie went inside of it and I couldn’t get him out. I tried reaching in and pushing but that didn’t work. I then picked up the carrier and turned it so the opening was facing the floor but Frankie held on like he was Spidercat. I finally had to shake it to convince him that maybe there were better places to nap.

Puck was good and didn’t cry one time on the way to the vet but when the vet tech needed to get him out of the carrier he decided to apply the lessons he learned from Frankie and made it very difficult for her. 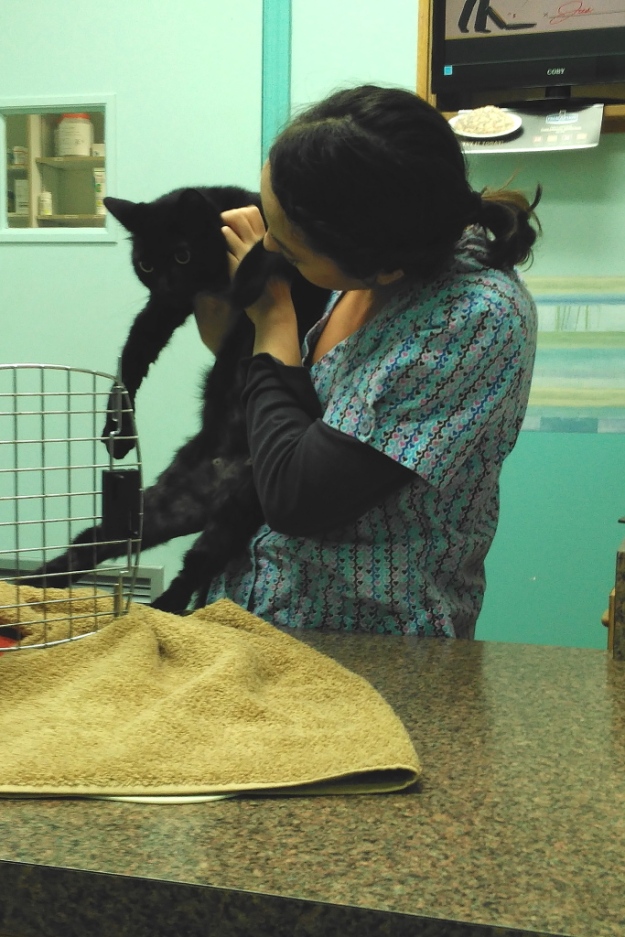 After the vet tech left, Puck just stayed where he was. If that was Chris, he would be exploring the exam room.

We saw Dr. Murphy, the owner of the clinic. Dr. Murphy had a lot of good reviews when I was originally looking for a new vet and I noticed he was trained in traditional and holistic medicine, which is what I was looking for. Puck saw another vet the first time we came but I wasn’t disappointed. He seemed to know what he was doing.

The Doctor ran a flea comb through what was left of Puck’s fur and found no sign of the little buggers but he still suspected fleas might be the culprit. I have not been a fan of putting poison on the cats and even bought a container of Diatomaceous Earth, which is a natural, edible product that kills fleas, to spread around their napping areas. Rose is more concerned about effectiveness and has insisted we treat our cats with Advantage for several months now. That started when Frankie escaped and came home with a flea.

We told the vet we were using Advantage and he said it no longer works in our county because the fleas have become resistant to it. Later he said that it doesn’t work in the entire state of Florida. That was a shock because it is very expensive. It’s $58 for six treatments on Amazon but we were buying it locally at Petsmart and paying around $80 or so, with the two pack being much more per dosage. A lot of money for a product that doesn’t work.

He said Revolution works 90% of the time and it has the added benefit of preventing heartworm. He seemed to think it is very safe for the cat. He also recommended another product that was even better but only controlled fleas. That product was called Activyl.

In the end, Puck ended up getting a shot of Steroids and antibiotics. I think I should find a supply of steroids and antibiotics and start treating cats in the neighborhood for a fee because that is always the solution. Do you think I’d get in trouble? Actually, the vet was very nice and really seemed to care so I need to trust that he knows what he is doing.

We also got a tube o Activyl for each of the cats and the doctor put it on Puck. He said he wanted us to use that for six months and by then we should know if fleas are Puck’s problem. After six months, he recommended we switch to Revolution for the added heartworm protection.

Rose was also convinced she saw tiny black spots on Chris and Frankie’s tails, indicating fleas were there, even though there were no fleas found on any of the cats. Nevertheless, she also had them add a shampoo to our bill which ended up to be about $230.

When we got home, Chris and Frankie were more interested in Puck’s carrier then they were in Puck.

It wasn’t long before they forgot about that because Rose decided to wash their tails and backside. Chris was first and he was miserable to deal with. He spent the entire time growling, hissing and crying while he struggled to get free.

He then went into the living room to groom himself. Frankie was very curious what happened to him but he soon found out. At least Frankie was a little better behaved than Chris. 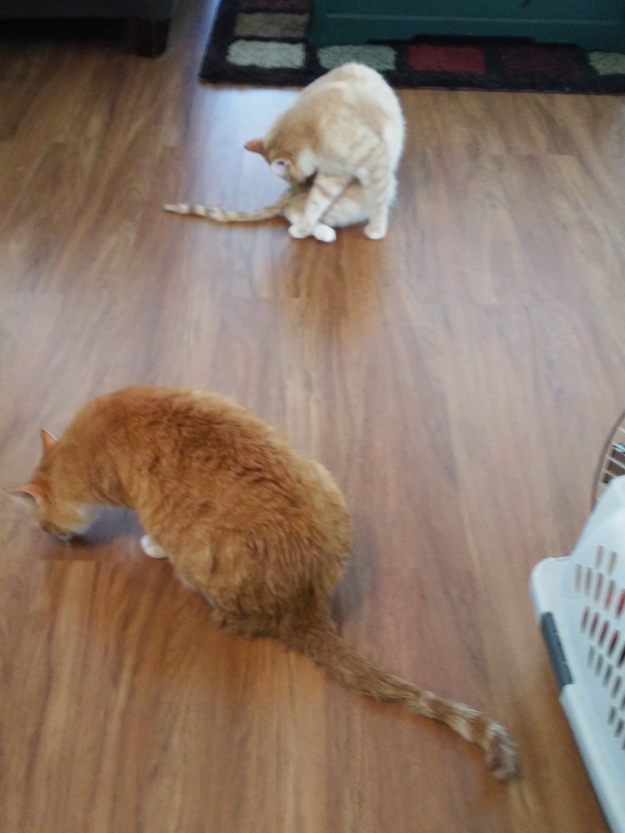 It wasn’t long before Frankie was in the living room grooming himself too. 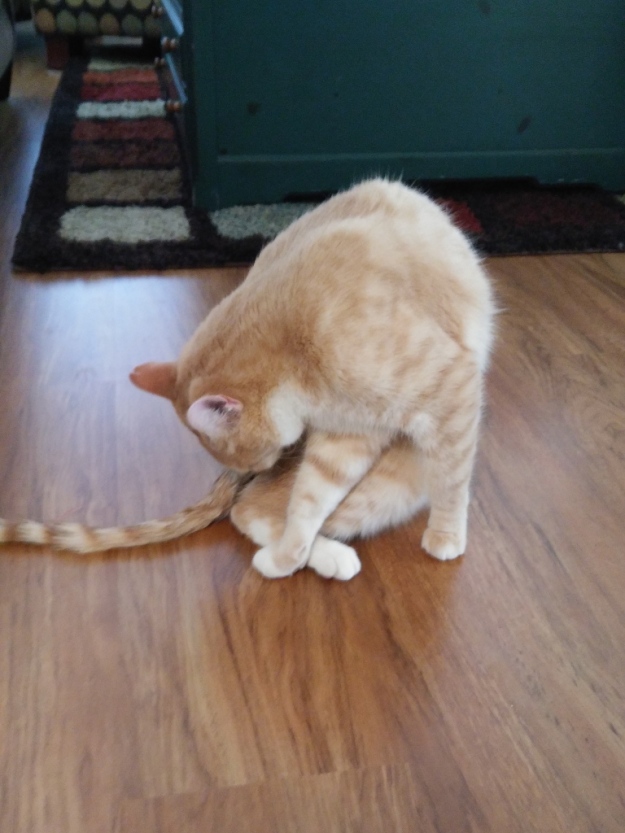 I sure hope this works for Puck because I don’t know what else we can do.