I suppose I should have noticed it earlier but I didn’t. On Sunday, after returning from a trip to the grocery store, I had all my reusable bags together on the floor. Frankie got on top of them and squatted down like he was going to pee on them. I wasn’t sure if that was his intention but I yelled at him and startled him pretty good. That night he climbed on Rose’s dresser where Rose had some clothes stacked up and Squatted like he was going to pee again. I yelled at him again, wondering what the heck is going on in his mind.

Tuesday evening, after coming home from work, I noticed Frankie get in the litter box, squat to pee, and then get out without peeing. Two minutes later he was in the box again trying to pee. That concerned me and I decided to keep an eye on him. I also decided that after work on Wednesday I would stop at the pet food store to see if I can get a holistic remedy for urinary tract problems.

Wednesday morning I noticed he was still having trouble peeing. I looked up potential causes and one major concern was a urinary blockage. Some of the websites said the blockage could be fatal. Some of the symptoms of that was lethargy and crying while trying to pee. Frankie had neither one of those problems. He was still running around the house chasing Puck and he gave no indication that he was in pain while trying to pee.

The truth is I had a dilemma. I am starting a new job next week and today was my day off from my old company, but I’ve been working on my day off for the new company for the last few weeks. I didn’t want to be late for work before actually starting full time.

I called my wife, who is on a business trip in San Diego, to see what she thought. She said I should bring him to the vet, so I called to see when I could bring Frankie in. This was the same vet that Puck went to for his over grooming problem.

The vet’s office hours start at 9 a.m. but I called at 8:15 just in case someone was there. Someone answered and when I explained the situation she said to bring Frankie in right away because they consider that an emergency. So I quickly finished getting ready, put Frankie in his carrier, and drove up to the vet’s office, which is almost 15 minutes away. Frankie was very good the entire trip. I never heard a peep out of him.

When I arrived they put us in an exam room and then said something about leaving him there. I said “Wait, no one said that I would be dropping him off.” The woman then explained that the doctor has surgery in the morning and doesn’t start looking at patients until 10 o’clock. In addition a condition like Frankie’s almost always requires a long-stay, usually overnight. Part of me wanted to just stay and wait for the doctor because leaving him complicated everything but I took her advice and went home. 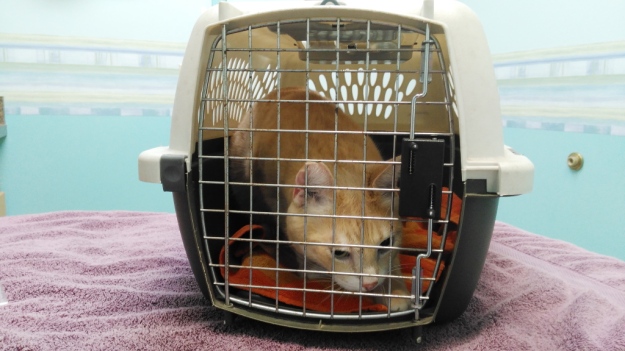 Around 9:30, shortly after I got home and was getting ready for work, I got a call from the vet who said Frankie does not have a blockage. That meant I could pick Frankie up, which I promptly did. I just wish I had listened to my gut and stayed at the vet’s office.

The bill was $296. The vet gave Frankie an antibiotic shot (big surprise) and the medication that he said was for anxiety, or something like that. He seemed to think that Frankie’s problem was psychological. I didn’t agree with that because Frankie is not like Puck. He doesn’t get it nervous and stressed like that.

I was in a bit of a hurry so I just paid the bill and left with Frankie. I dropped him off at home, quickly got ready, and left for work.

After work I stopped at the pet food store and asked the woman what she had for urinary tract infection. She said she had just what I needed, a product called PetAlive UTI-free. In fact, she raved about how wonderful it was. The only problem was that it was $40 for a very small bottle, but I figured if it works it would be worth it. I looked it up later and found it for nearly half that price on Amazon. I think sometimes I am better off not knowing.

When I got home I looked at the medication that the vet gave me. It’s called Prazosin. According to Wikipedia it is a sympatholytic drug used to treat high blood pressure and anxiety, PTSD, and panic disorder. That was a surprise because usually the vet prescribes antibiotics and steroids. This time he prescribed antibiotics and whatever the hell this is.

I decided not to give this to Frankie. It’s bad enough he got antibiotics again, he doesn’t need some weird drug for panic disorder. I’m very surprised that this doctor calls himself a holistic vet. I will say, however, Puck is doing a bit better since his last visit so maybe I don’t know everything. Even so, I would rather try to this holistic stuff that I bought first before subjecting Frankie to anti-psychotic drugs for a urinary tract infection.

The bottle of UTI-Free contains many very tiny balls that dissolve in water. I was told to put a pinch in Frankie’s mouth six times in three hours. I suck at forcing stuff in cat’s mouths so I added a pinch of the stuff to a little butter on my finger and let Frankie lick it off, which he gladly did.

I gave him a little more this morning by adding it to his food. So far I have only seen Frankie in the box once this morning, which is good, but I was not in a position to see if he actually peed or not.

What do you think? Any advice on this matter would be appreciated.

P.S. The WordPress editor wants me to replace words like  indication, contains and position with simpler words. I don’t want to do that because I think they are simple enough. Please let me know if any of these words give you trouble.