It has become a routine lately that the cats go outside for ten or fifteen minutes every Sunday. I put Frankie’s harness and leash on and walk around the yard with him while Rose keeps an eye on Chris and Puck. It seems that Frankie has gradually come to realize that there are plenty of interesting things in our own back yard and has become less envious of what is on the other side of the fence. The last time I had him on the leash he did not even attempt to go through the fence.

It was then that I decided it was time to lose the leash and let Frankie play with Chris and puck unencumbered. I was pretty confident that he would stay close if I watched him and “herded” him away from the fence if needed. I was also certain he would return home since he has done so before and he was now very familiar with the area. I did need to hedge my bet a little in case I was wrong so I decided to stop at PetSmart last week. They have a machine there that engraves tags, so I bought one for Frankie and put his name, our address and phone numbers on it.

On Sunday I put the tag on a collar that I have had for awhile and put the collar on Frankie. We then crossed our fingers and let them all out. 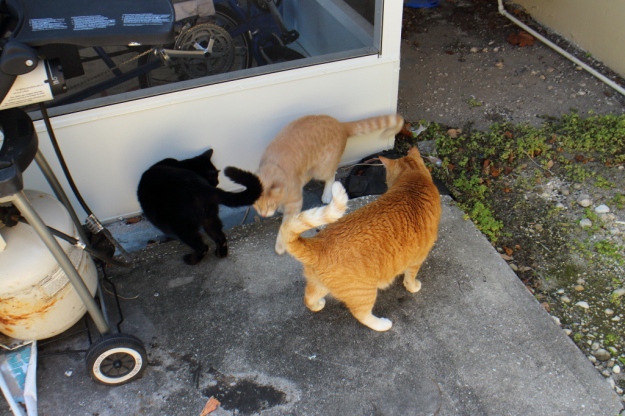 Surprising, Frankie was not a bad cat and stayed close most of the time. The only issue I had was when he walked into our neighbor’s patio like Chris did a few weeks ago. Chris, however, caught a lizard and ran into the house with it. Oh well, at least they had fun.

Recently I gave the cats a nice box that they liked to play in and then I took it away because we had to ship something and it was just the right size. I felt bad about it so when I came across another box at work I grabbed it.

I decided to make this one better than the last so I taped the top closed and cut two openings; one on the front and one on the side. I then cut a few peep holes in it so the box could feel like a little fort with spy holes to watch the “enemy.”

I named it “Fort Box” and the cats took to it right away, especially Colonel Chris who took over command of the fort.

I know you’re there Frankie 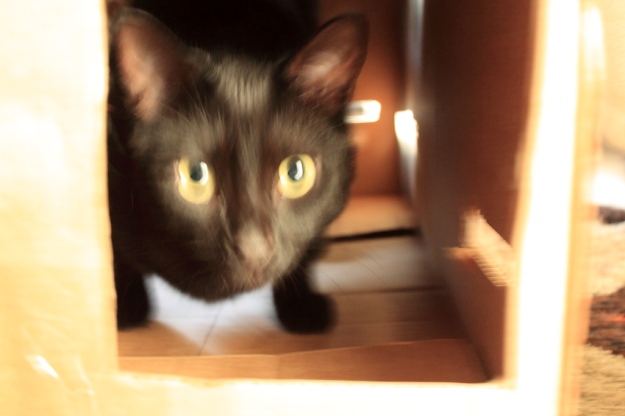 Puck! You’re supposed to be inside the fort. 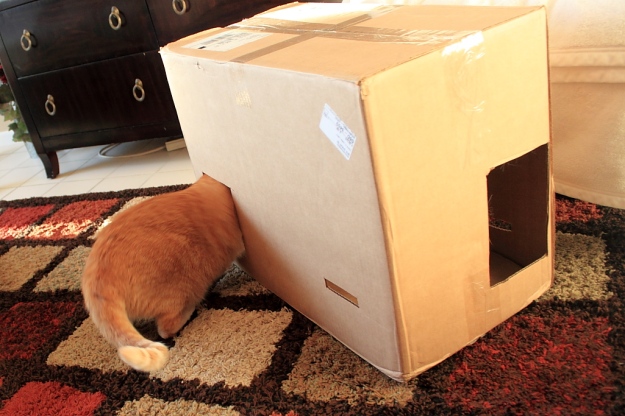 I wonder if there is an attic? 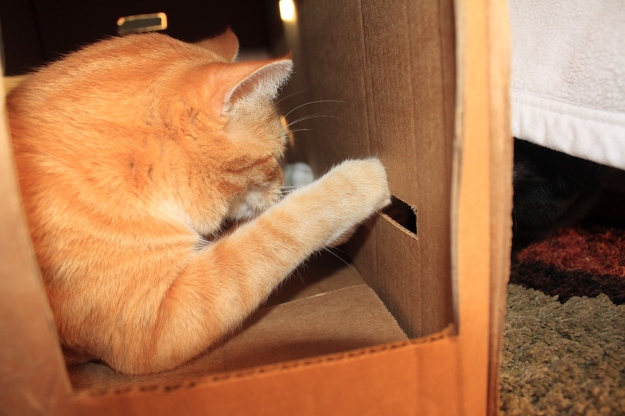 I can see you guys so don’t try anything.

You can have your turn Frankie, when I am done lying here doing nothing. 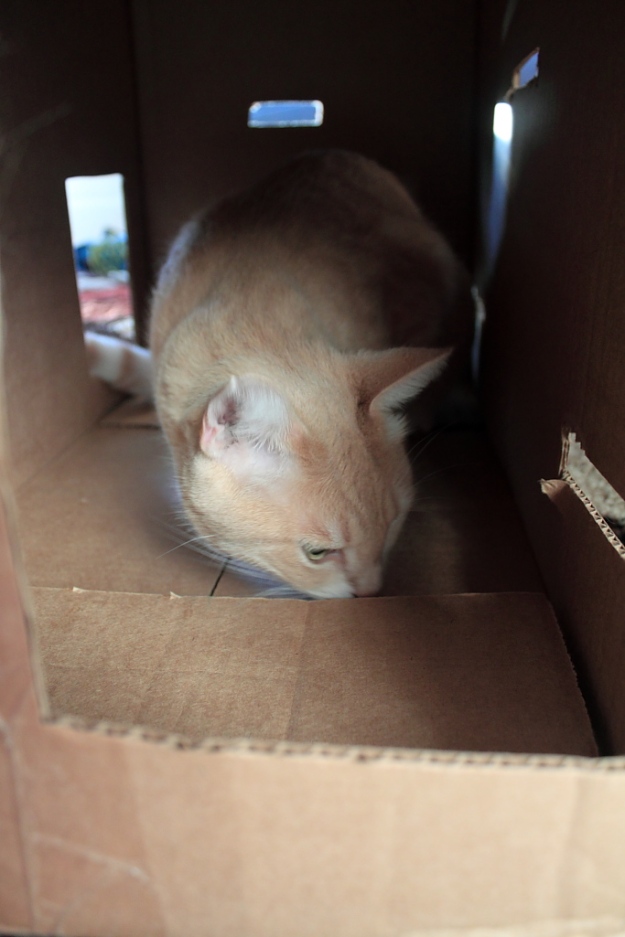 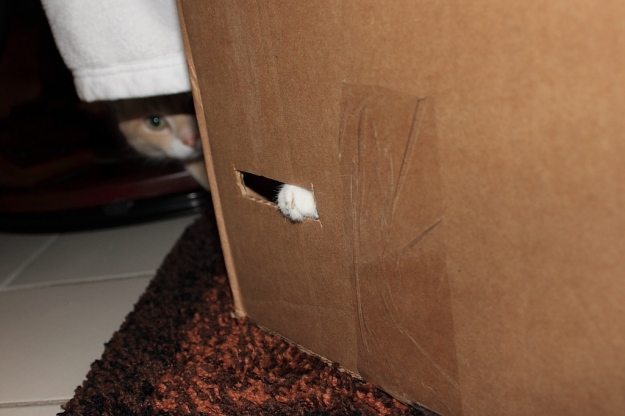 Where did you go Frankie? I was just kidding. You can come back. I’ll share.

We had a great Christmas. We spent it at home with family and friends. Rose’s son, Nick, was here from Massachusetts and my son, Chris, was also here. He lives nearby but because of conflicting work schedules we don’t see each other very often. Chris, as some of you know, was not named after my son but came to us with the name.

Unfortunately Puck, who is not a fan of strangers, spent the day under the bed. Chris celebrated the holiday by greeting everyone who came into the house and by enjoying some outside time.

It started just like our last party with Chris on top of the table we set up for refreshments.

When people started to arrive I decided to let Chris outside while I watched him from the patio.

I left the door open so he could come back inside. I really didn’t expect him to do that but after a while of watching him I got distracted and forgot he was outside. When I remembered I started outside to look for him when I saw him lying inside the patio (sorry, no picture of that). 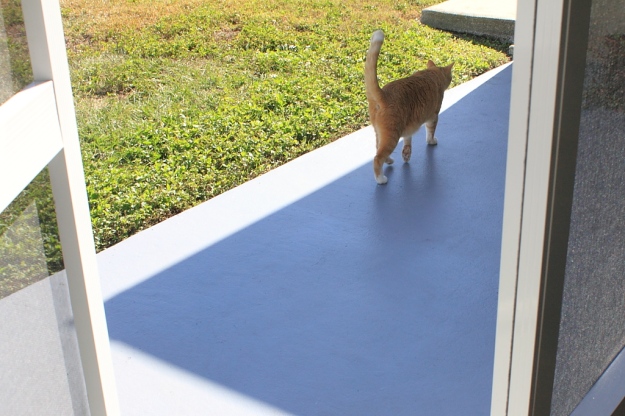 After he went out the first time and after the customary grass-eating ritual, Chris went looking for trouble.

Chris has become less of an adventurer and tends to stay closer to the house now. That is a good thing but I still have to watch him because he will sometimes wander to the side of the property and crawl under the fence if I don’t stop him. This day he was happy to lie just outside the patio and roll around.

After he was tired of playing outside he came in and went from lap to lap, making sure nobody was left out. Here he is with my son. 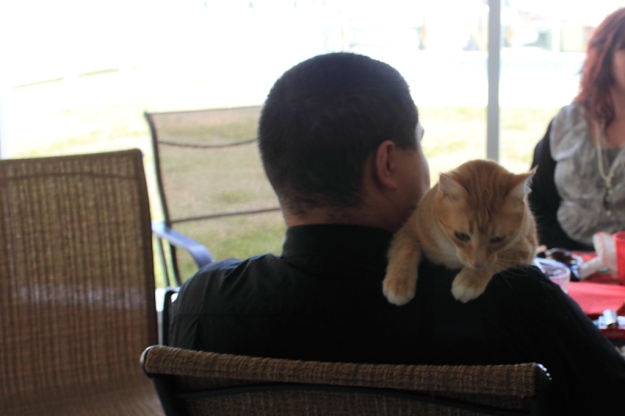 I hope you all enjoyed your Christmas as much as Chris and I enjoyed ours.

I wanted to add a video to my last post but my video software keeps faulting and shutting down. I finally was able to put it together using the software that came with my Canon camera. It’s funny but I did not even know I had it.

This video was taken after I took the photographs and about the time I wanted to get the cats inside but Chris and Puck would have none of it. They were having too much fun and wanted to stay outside and play. If they were kids they would whine a little but eventually listen. Cats don’t listen and need to be chased down, which isn’t easy.