We had a great Christmas. We spent it at home with family and friends. Rose’s son, Nick, was here from Massachusetts and my son, Chris, was also here. He lives nearby but because of conflicting work schedules we don’t see each other very often. Chris, as some of you know, was not named after my son but came to us with the name.

Unfortunately Puck, who is not a fan of strangers, spent the day under the bed. Chris celebrated the holiday by greeting everyone who came into the house and by enjoying some outside time.

It started just like our last party with Chris on top of the table we set up for refreshments.

When people started to arrive I decided to let Chris outside while I watched him from the patio. 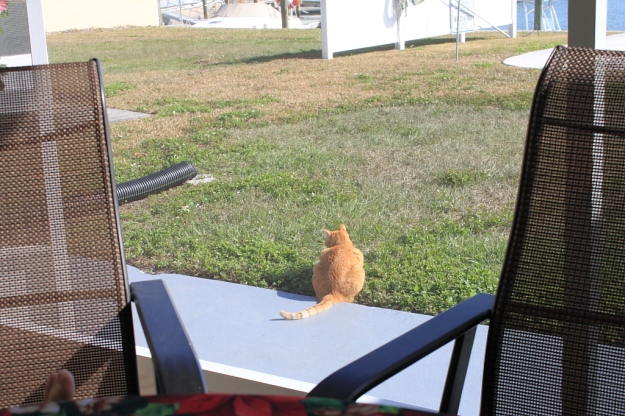 I left the door open so he could come back inside. I really didn’t expect him to do that but after a while of watching him I got distracted and forgot he was outside. When I remembered I started outside to look for him when I saw him lying inside the patio (sorry, no picture of that).

After he went out the first time and after the customary grass-eating ritual, Chris went looking for trouble.

Chris has become less of an adventurer and tends to stay closer to the house now. That is a good thing but I still have to watch him because he will sometimes wander to the side of the property and crawl under the fence if I don’t stop him. This day he was happy to lie just outside the patio and roll around. 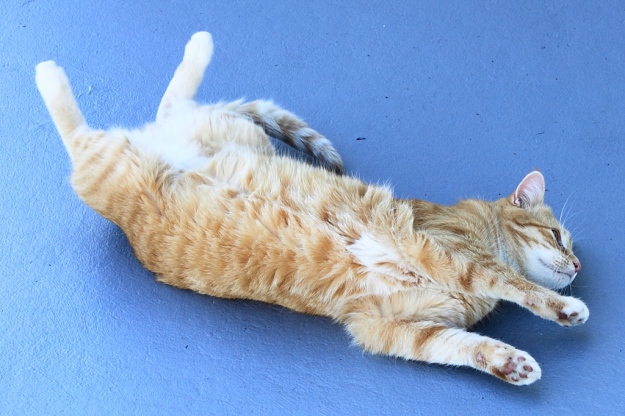 After he was tired of playing outside he came in and went from lap to lap, making sure nobody was left out. Here he is with my son.

I hope you all enjoyed your Christmas as much as Chris and I enjoyed ours.