Often on my walk with Frankie, we see many squirrels and birds. Sometimes they are close enough to prompt an attempted attack, which is thwarted by the leash or by me running alongside Frankie and making too much noise. More often than not, the birds or squirrels are far enough away to warrant only a curious look.

Here, Frankie is probably hoping the bird will wander into the danger zone.


I ordered a ground feeder last week in an attempt to distract the squirrels away from our new window bird feeder. While I was waiting for it, a Bluejay found our feeder. The curtain was partially closed and I didn’t want to get too close and scare him away, but I took a photo anyway.

The ground feeder I ordered doubles as a birdbath but I put corn in it, which I read is a favorite of squirrels, and placed it under the bird feeder yesterday.

Later that day I saw a squirrel in the bird feeder and looked down to see the corn had not been touched. I watched for a while and saw the squirrel come close to the corn but he never looked at it. I don’t know if he was ignoring it or just had not found it yet.

This morning the squirrel was back in the bird feeder while Frankie and Floki were there. This time he was not as nervous around them as in the past. Both cats even attacked the window to no avail. Eventually, they just settled down to watch.

When we moved into our current home almost two years ago, an egret would show up every afternoon expecting to be fed. I assumed the previous resident had fed the bird and I felt bad letting him (I will assume it is male for this writing) go hungry, but we typically don’t have meat suitable for birds lying around the house. I tried giving him cat food but that was a no-go. We did buy hot dogs for him once but we are not always home and didn’t want the bird to become dependent on us so we stopped feeding him when the dogs were gone. Soon he only came around occasionally and then not at all.

That changed the other day when he showed up at our back door looking for food. I’m not sure what changed but he apparently has a long memory. 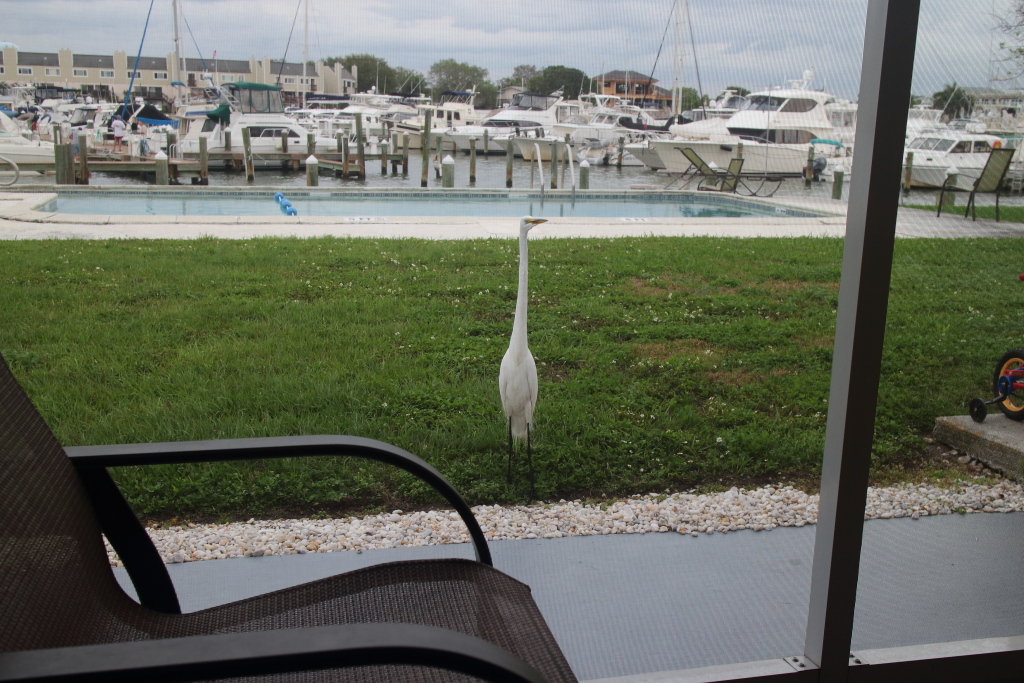 Again we had no food for him. Rose wanted me to throw him some cheese but I didn’t think that was a good idea, partially because the cats were very interested in him and opening the door would have been difficult with two bad cats and Puck wanting to run out. 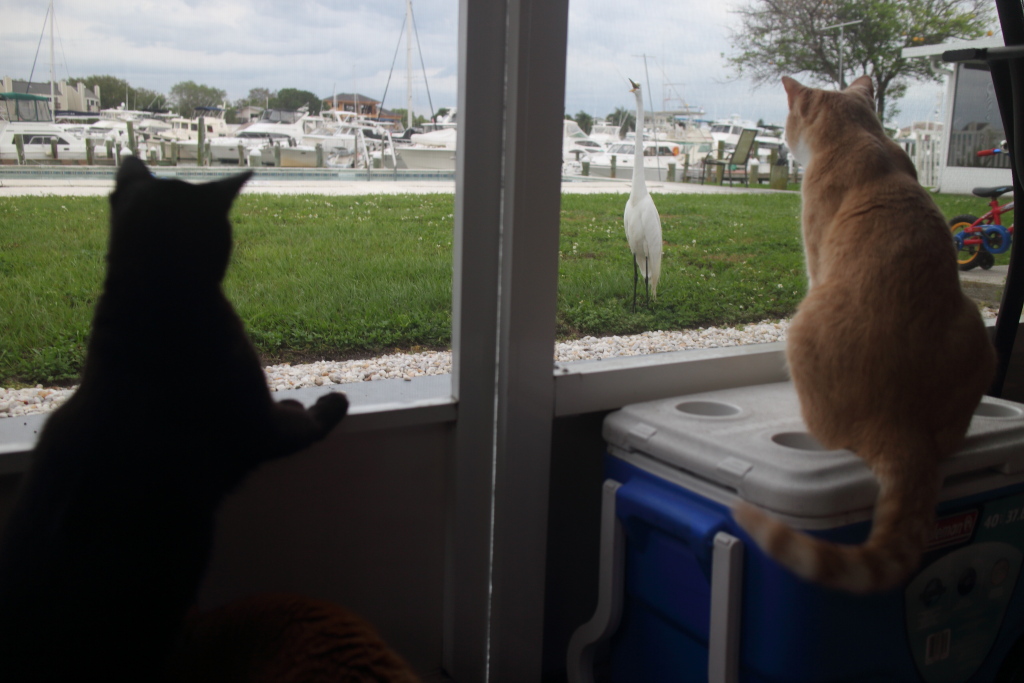 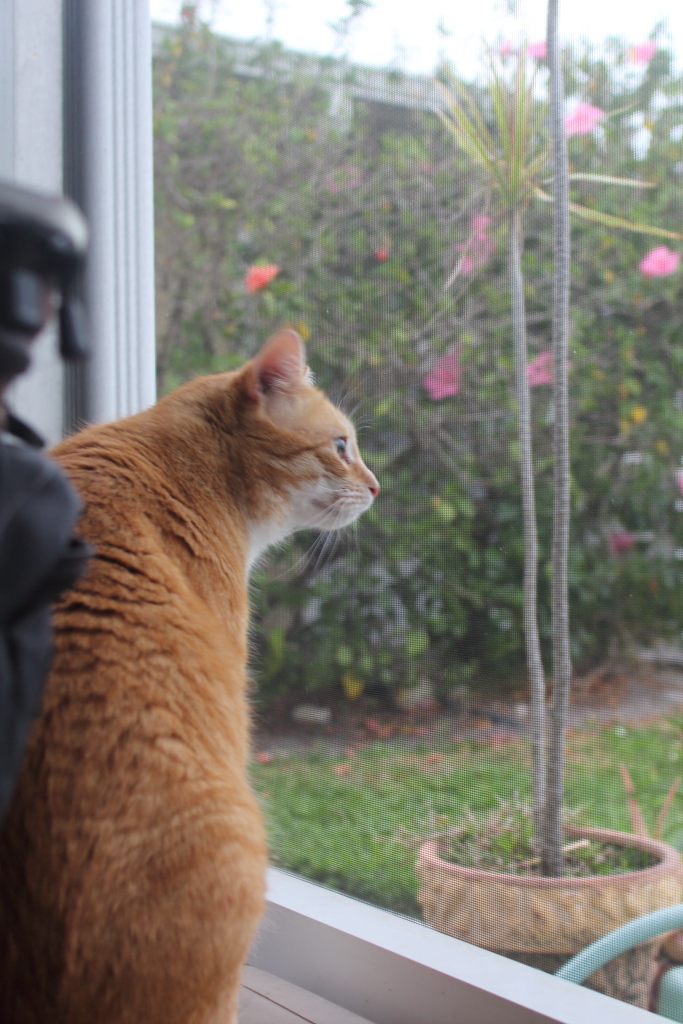 Eventually he got the hint and went away. I felt very bad not giving him anything but I think it would be better if I teach him how to fish.

Our Egret returned last weekend looking for food. I tried giving him a little ham and Puck managed to slip past me and ran outside. He just ignored the big bird and ran off to do his own thing. I decided to let Chris out too but Frankie had to stay in after what he did on his first foray outside. Both cats seemed to not be interested in the egret and the egret seemed to not be afraid that two cats were running around the yard. 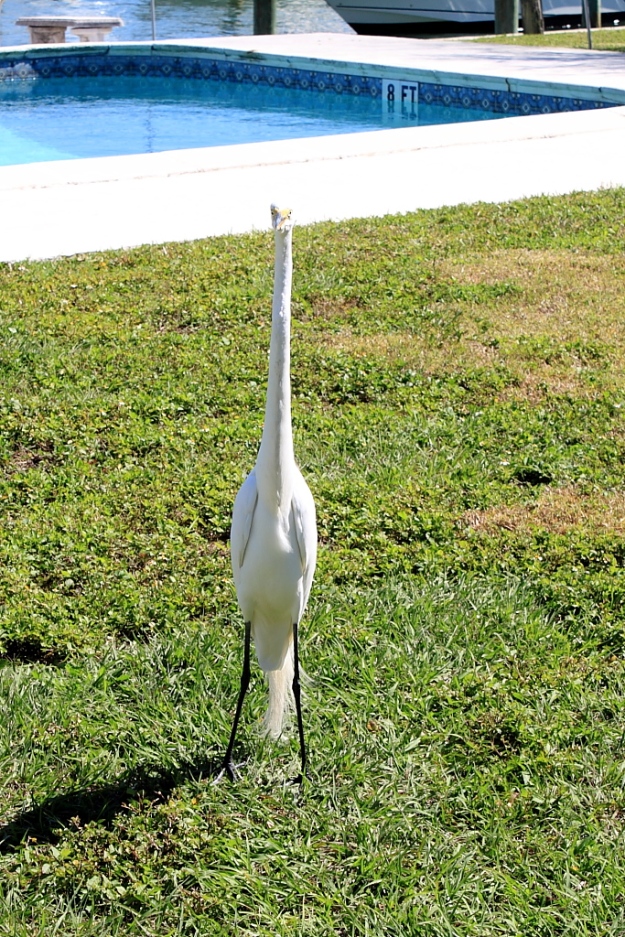 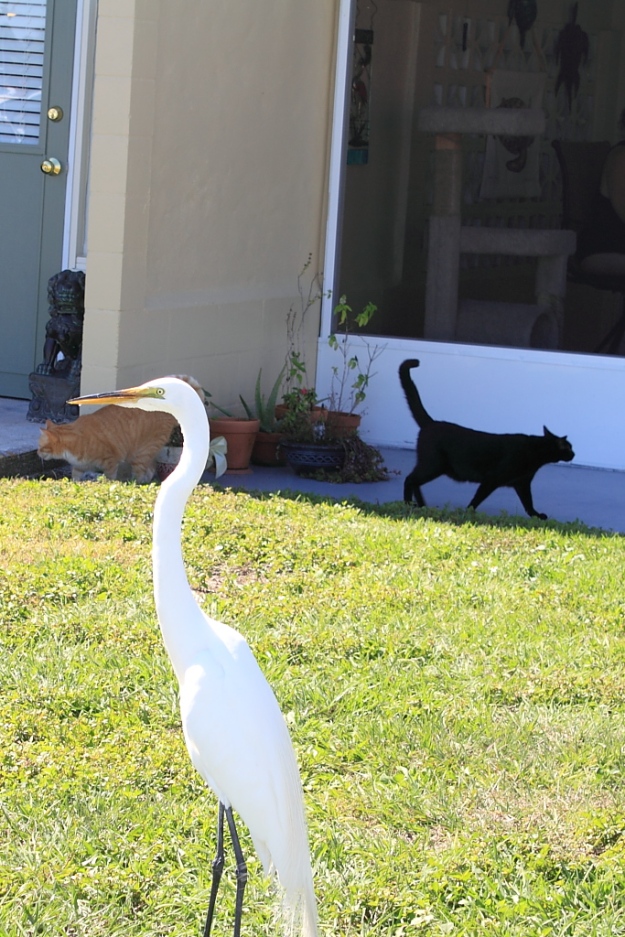 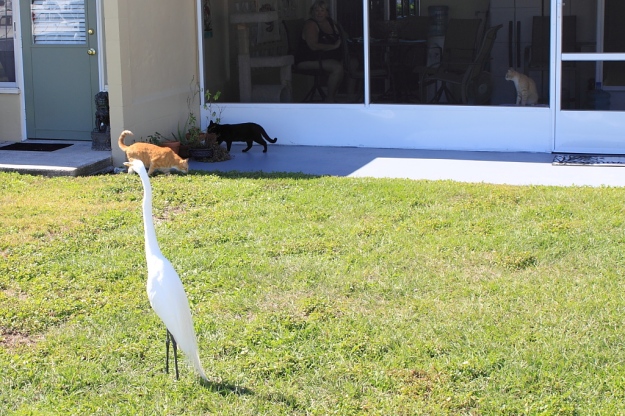 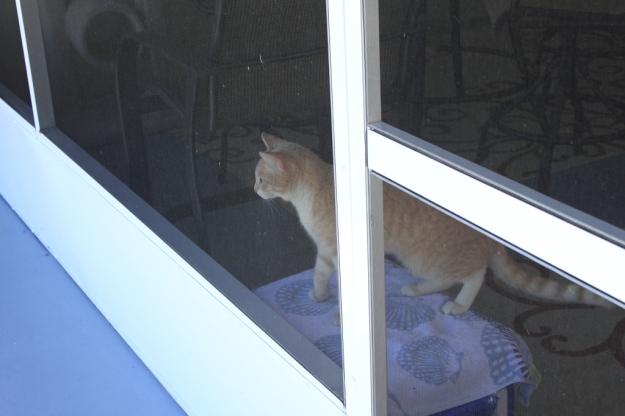 I felt bad that Frankie did not get to participate. We talked about letting him out today. I said it would probably be okay if Rose stayed and helped watch him but she was skeptical so only Chris got to spend some time outside, and that was only because he escaped twice while I was coming through the door.

When we moved into our current home in June, there was an egret that would come by every day and hang out by our back door waiting for us to feed him. We assumed the woman that lived there before us would feed him everyday and he came to expect it. I did not really want to continue the tradition but I felt like we should wean him off the handouts. Unfortunately we had no meat to give him other than cat food so I put some out for him but he was not very interested. Eventually he went away but then suddenly showed up at our door the other evening. 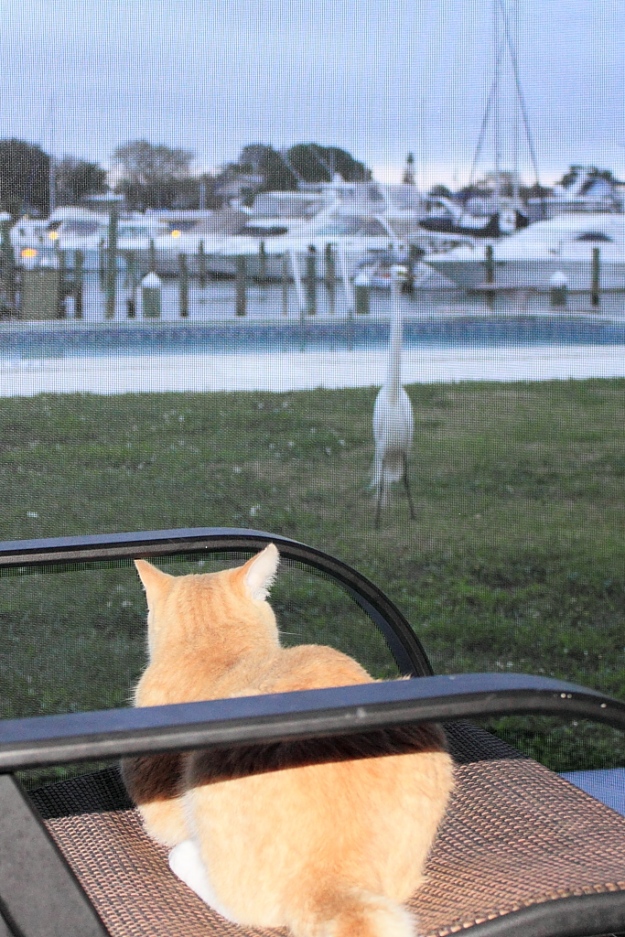 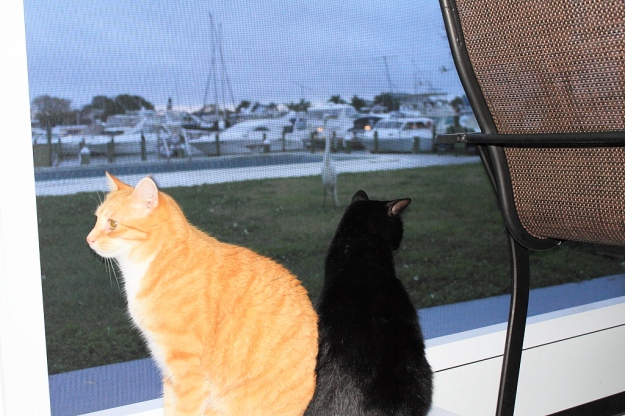 All the cats were on the patio, interested in what this bird was doing so close to their space. We only had sliced ham for him so I tore a piece into smaller pieces and threw them to him. He gobbled those up quickly and stuck around begging for more.

Rose gave me another piece so I did the same thing. This time Puck ran out the door and chased the bird back but he didn’t leave the yard. I then had to spend the next ten minutes chasing Puck back and forth until Rose finally opened the door and I was able to corral him back onto the patio.

The following was meant to be published last August so it is out of sequence. I just happened to notice today that it was marked as a draft. Oops 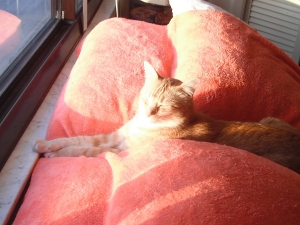 Considering that cats tend to nap most of the day away, Chris is no ordinary cat. He is usually looking for trouble to get into while Abbey and Tigger are snoozing. That being said, there are times when he will relax. When we lived in the condo, he would often lay on the spare bed and look out the window. This was a favorite spot for all the cats.

One day a mockingbird spotted Chris in the window and started hovering just outside, trying to intimidate him to leave. This of course just caused him to become more interested in the bird. 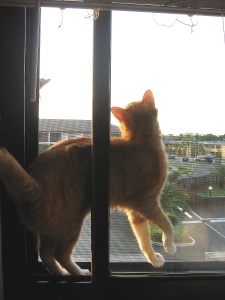 This went on for a couple of weeks, sometimes several times a day. A few times I had the window open a few inches and Chris would slide his body between the glass and the screen in a vain attempt to get the bird. I had to keep the window shut because I was afraid he would push the screen out and fall from the third floor.

The funniest part of all that was the bird only picked on Chris. When Tigger and Abbey were laying there, the bird was nowhere in sight. I suppose this might have been a mother bird protecting a nearby nest and to her, Chris just looked like trouble. Only Chris could cause problems by looking out the window. 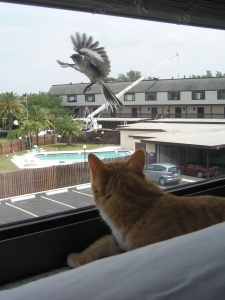 I do know that mocking birds can be pretty mean for their size. I have regularly seen them chasing larger crows and even an Osprey. Rose said when she was young she had an outside cat that lived in fear because a mockingbird would attack it every chance it could. She thought it was payback for something bad that the cat did but I think the cat’s territory just overlapped with the bird’s.

Eventually the bird stopped bothering Chris. It was around June so I suppose it was nesting season and once the young birds were out of the nest, there was no reason to protect it.