Frankie was being quite the pest yesterday and Rose asked me to put some food down for the cats, but I knew it wasn’t food he was looking for. I put my shoes on and announced that I was going to take Frankie for a walk. As I was heading into the bedroom, Rose was hyping Frankie up by loudly saying, “Are you gonna go outside, Frankie? Are you gonna go outside?” This, of course, got Frankie all excited and he followed me into the bedroom, meowing up a storm. When I pulled the harness out of my drawer, he really got excited.

As soon as Frankie gets outside the excitement goes away and he becomes very focused. After taking time to smell the air we walked across the street and stopped to eat some grass, or whatever this is.

We then found a nice patch of ground to stretch out and get some sun.

Then a little shade was in order.

I stood there for a long time waiting for Frankie to decide what he wanted to do. To my surprise, he fell asleep.

I hated to wake him up but I couldn’t just stand there in the sun and wait for his nap to be over. I knelt down and very gently petted him. That woke him up and he hissed at me and scratched my hand, making it bleed in three places.

I then picked him up and brought him home. He had been out for about forty-five minutes and Chris was home waiting for his turn. Surprisingly, Frankie let me carry him home without giving me a hard time.

When we got home, I let Chris out and stayed with him. He decided to eat some grass as soon as he got outside.

He then spent some time in the sun.

After fifteen minutes I decided that I should go in and wash the cut on my hand. I picked Chris up and he decided to turn around as I was lifting him up. I think he planned on climbing onto my shoulders but he just ended up putting a gash in my stomach. Well, at least I was going in to clean one wound so what’s one more?

My wife and I were suddenly awakened this morning at 5 a.m. by the sound of the worst catfight I have ever heard. I sprang out of bed and opened the door to see Chris and Frankie going at it. I yelled for them to stop and tried to separate them to no avail. Chris then ran into the bedroom with Frankie on his tail. It was clear that Frankie was the aggressor so I picked him up to put him out of the bedroom but he scratched and dug his claws into me until I had to let him go.

Once he hit the ground he went after Chris again and I had no choice but to put my hands and arms in the line of fire again. I quickly picked him up and threw him out the door and quickly closed the door. When I say “threw” I mean “threw.” I was four feet from the door and didn’t want to risk further injury by walking him to another room.

I cleaned the blood off my hands and arms and put bandages on my fingers and then went out of the room. WhiIe I was making coffee I cleaned the water bowls so I could put one in the bedroom with Chris. I asked Rose to help since she was in the bedroom and Frankie was lurking outside the door. I thought I could quickly hand the water bowl to her while using my body as a shield to keep Frankie out, but I thought wrong. Frankie slipped past me and into the bedroom where he immediately attacked Chris again.

Rose tried to protect Chris with a pillow while I tried to get Frankie off him. I finally got Frankie out of the bedroom but my hands were torn up worse than ever. 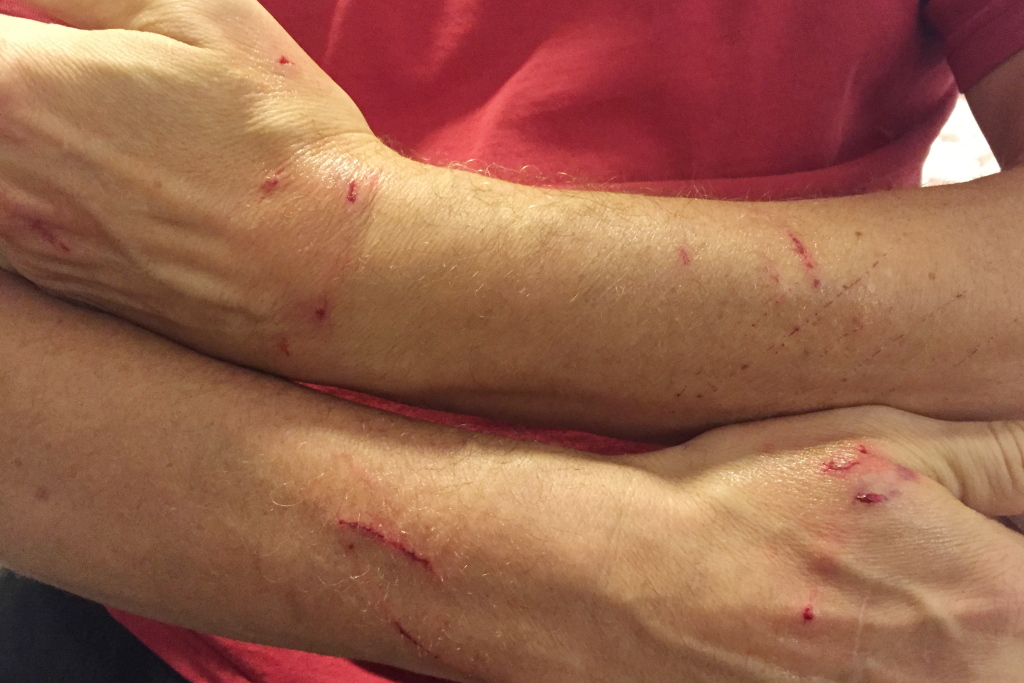 As soon as things settled down I brought a litterbox inside and closed Frankie in the Florida room, better known as the cats’ room, and opened the bedroom door so Chris could come out. He eventually wandered to where he could see Frankie and he started growling at him.
Frankie was growling at Chris too but you can’t hear it on the video.

I made an appointment as soon as the vet opened for Frankie to come in but they didn’t have an opening until 3:30. We didn’t know which cat should go but we figured the aggressor was more likely to have a problem. The funny thing was, Frankie was not being mean to Flokie and he was very affectionate to me. I sat in there with him for a while and he snuggled on my lap.

Before I knew it, Frankie and Flokie were lying together on our bed. The comforter is missing because I had to wash the blood off it.

Rose is convinced that Chris is acting more lethargic than usual so we decided to bring Chris in instead of Frankie. I don’t know what we are going to do about the fighting. Hopefully, Chris is okay and this will all blow over.