We got back late Monday from our vacation to Germany where my wife and I celebrated our 20th anniversary. We had a great time there but we were happy to get home and see our kitties. They were happy to see us too.

Of course, there were a lot of things we needed to do after we got home. For one thing, the bed sheets needed to be changed.

Frankie and Flokie were eager to help but Chris was lying in the hallway in a diabetic coma from all the dry food that he had unrestricted access to while we were away. He did manage to come up on the bed after it was made.

Frankie decided to join me in the bathroom. He likes to get on the sink and move the soap dish for some reason but this is the first time I saw him lie on the sink.

We also had plenty of laundry to do and Frankie and Floki were eager to help with that too.

I will write about our trip on my personal blog, CharlesHuss.com, when I have time so keep an eye out for that.

Hopefully I will be able to get back on track soon. We are having some major work done on our home starting Saturday so I don’t know how normal things will be for a while but I will try visit blogs and get some writing done if I can.

We had two of Rose’s friends taking care of our cats while we were on our cruise. Lynn would come in the morning and Nancy would come in the afternoon (or vis versa). Lynn took pictures and sent us updates throughout the week and while we were not able to receive texts most days, it was a relief to know our cats were doing well on the days we did see them, which was Saturday while we were waiting to leave, Thursday when we were in Puerto Rico and Sunday when we returned.

I copied some of the texts from Rose’s phone to share with you. 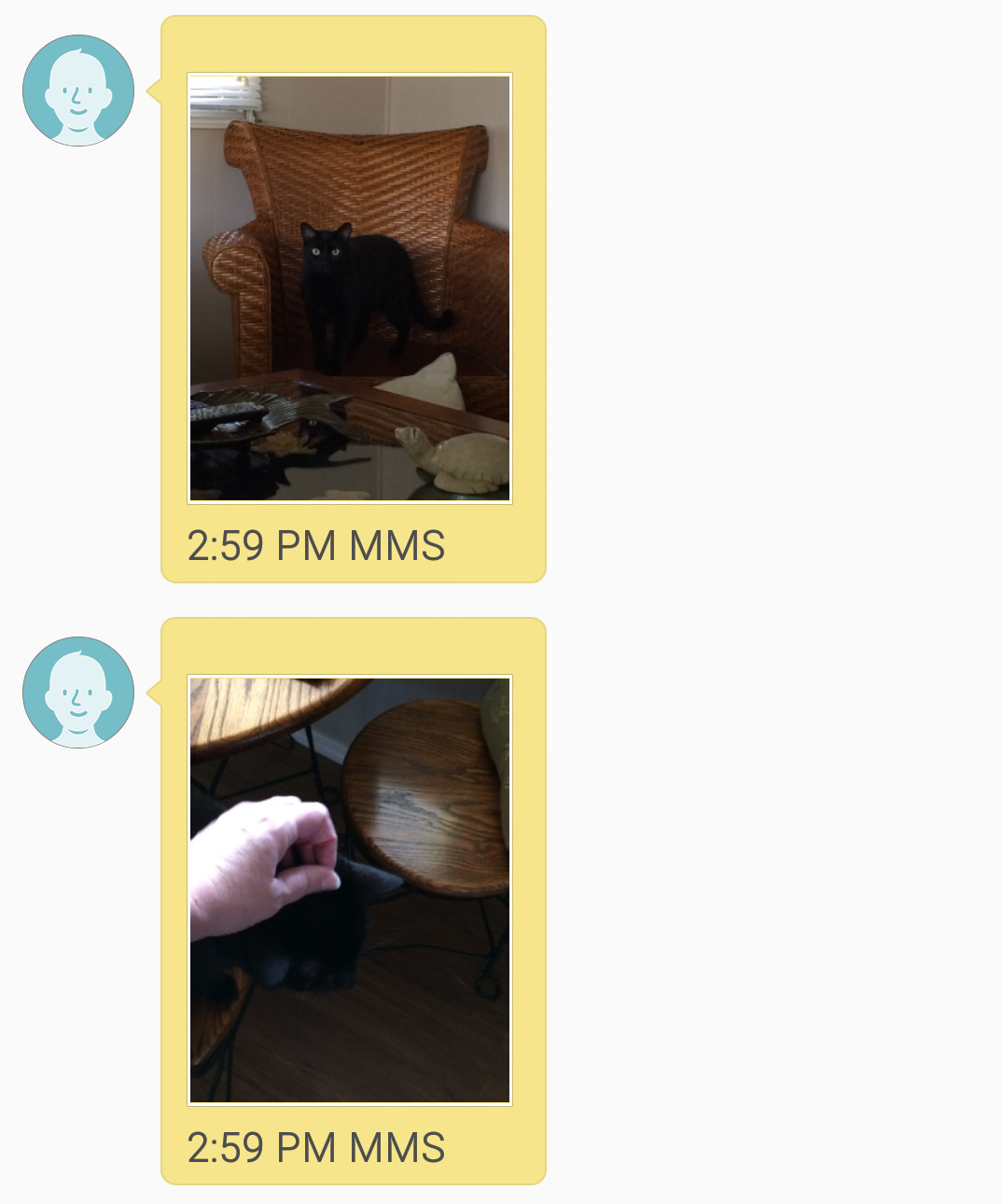 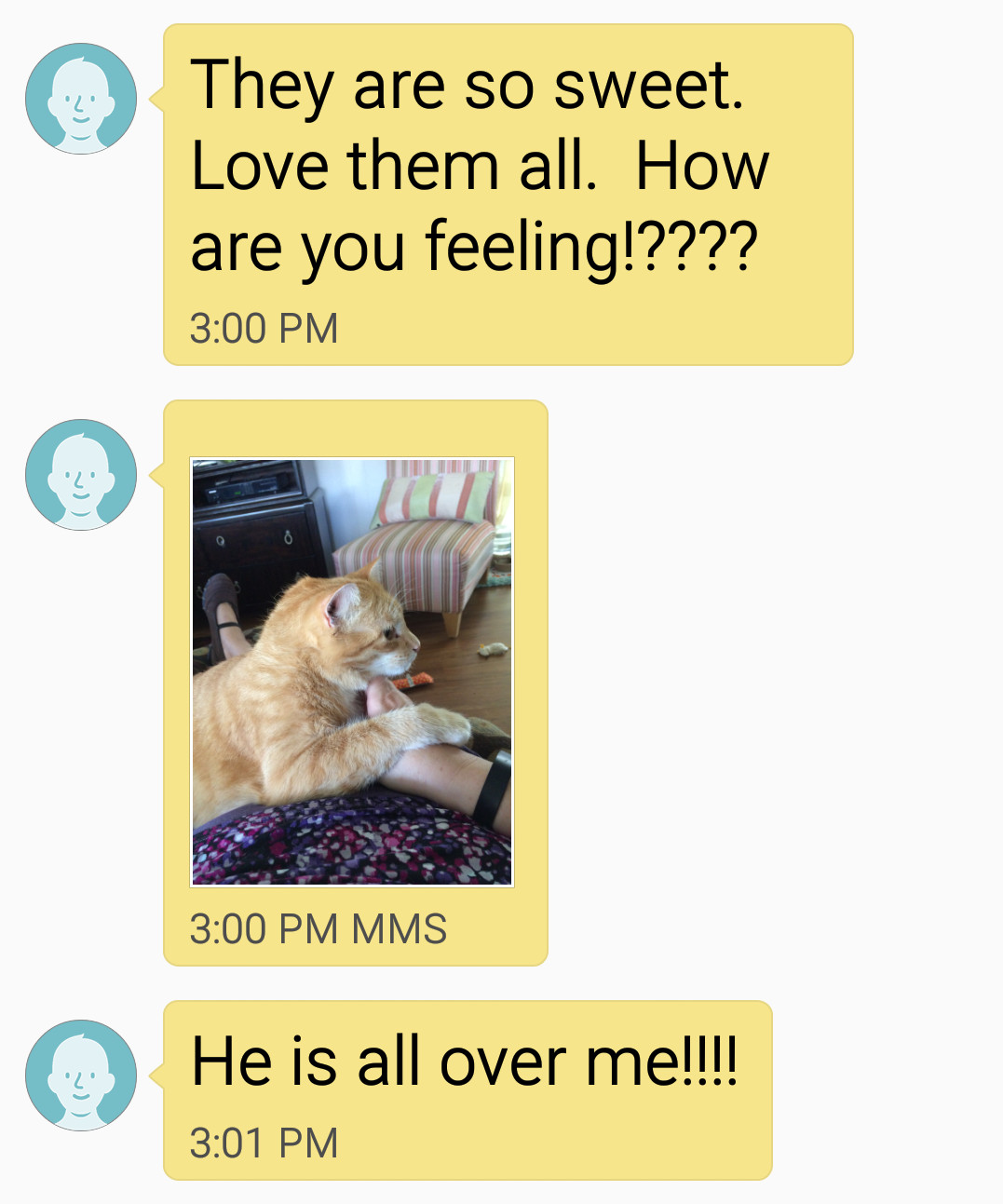 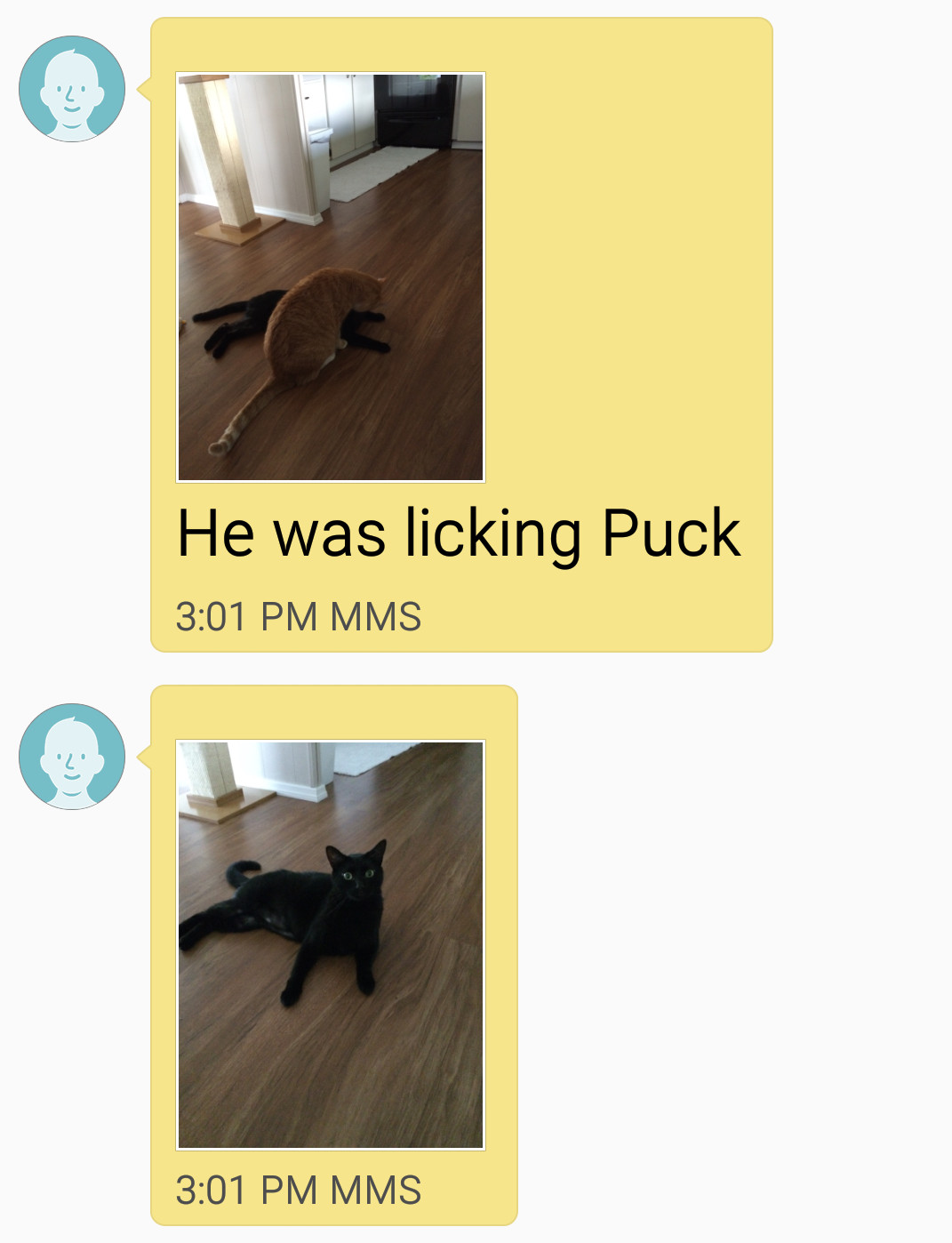 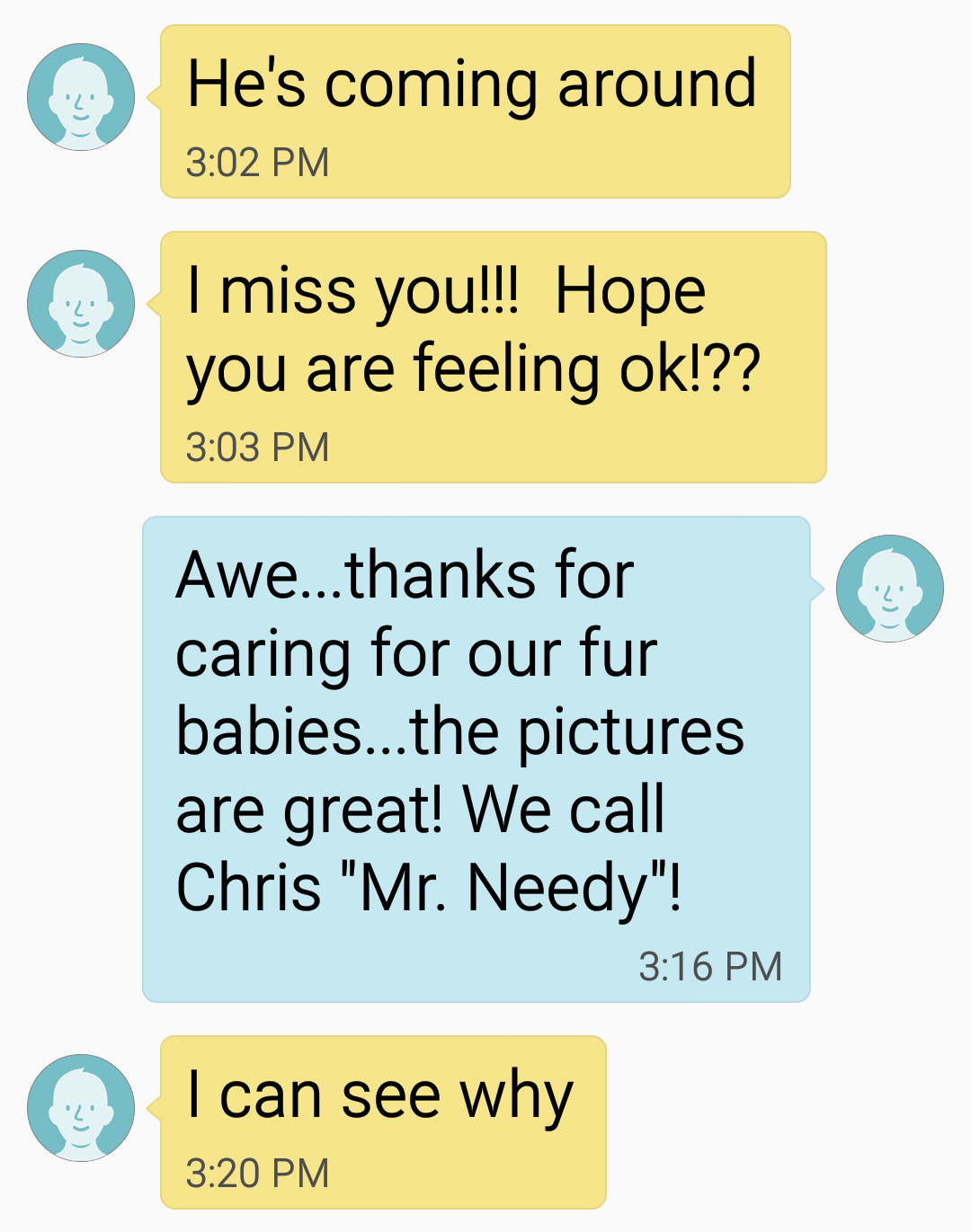 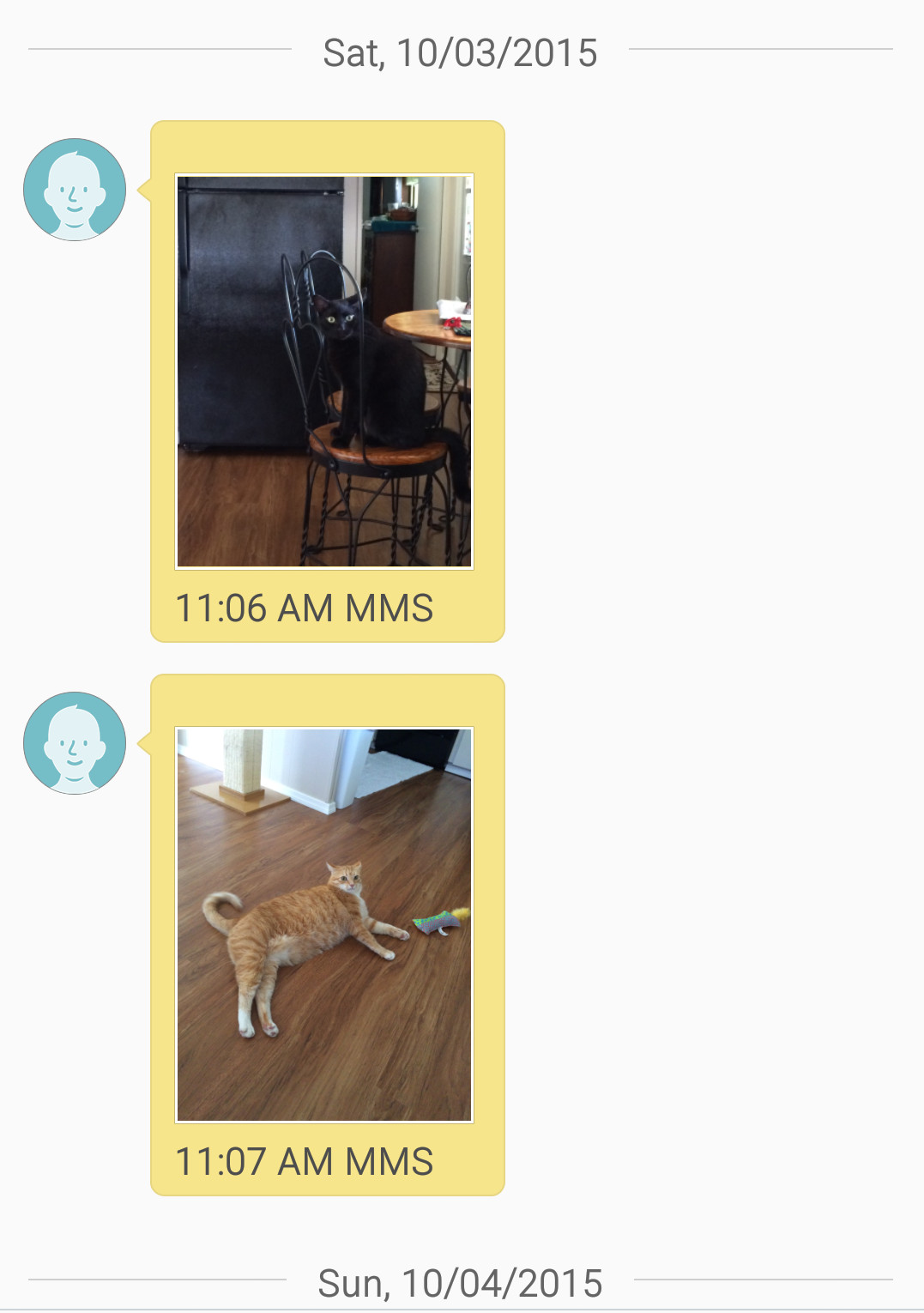 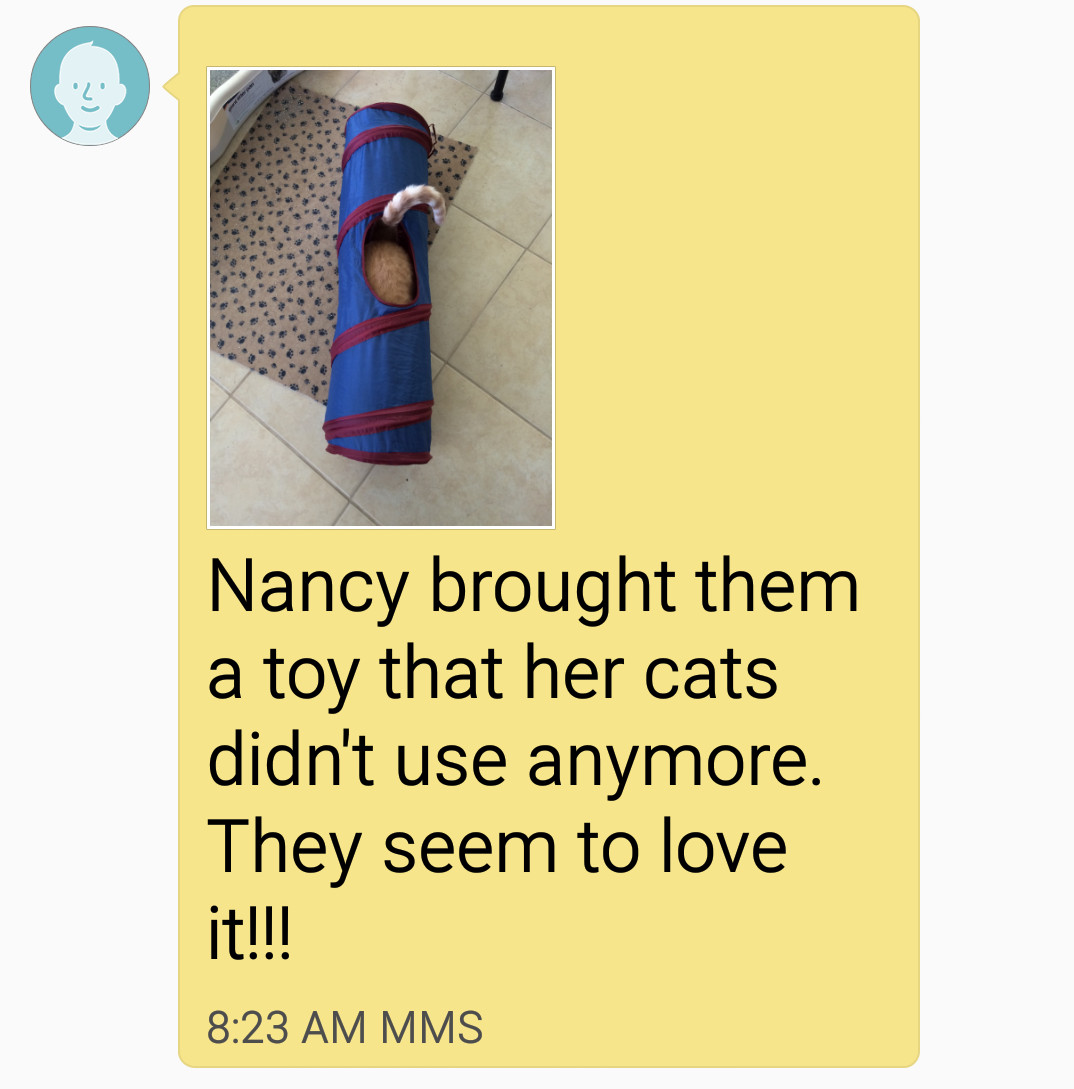 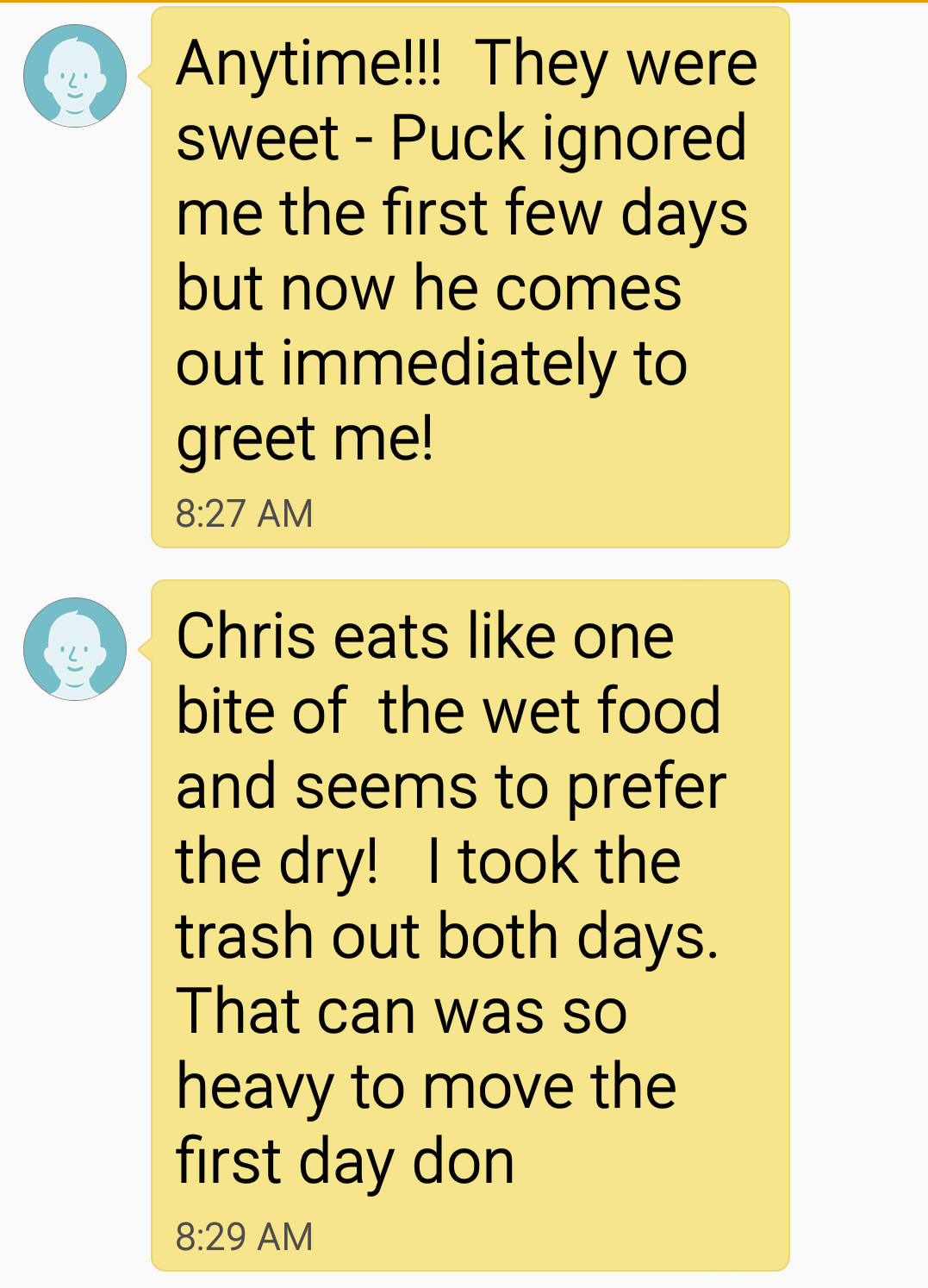 Thank you Lynn and Nancy for taking such good care of our boys. Does anyone else get updates from pet sitters like this?

We returned from our eight-day cruise late Sunday afternoon and the cats were very happy to see… our luggage. 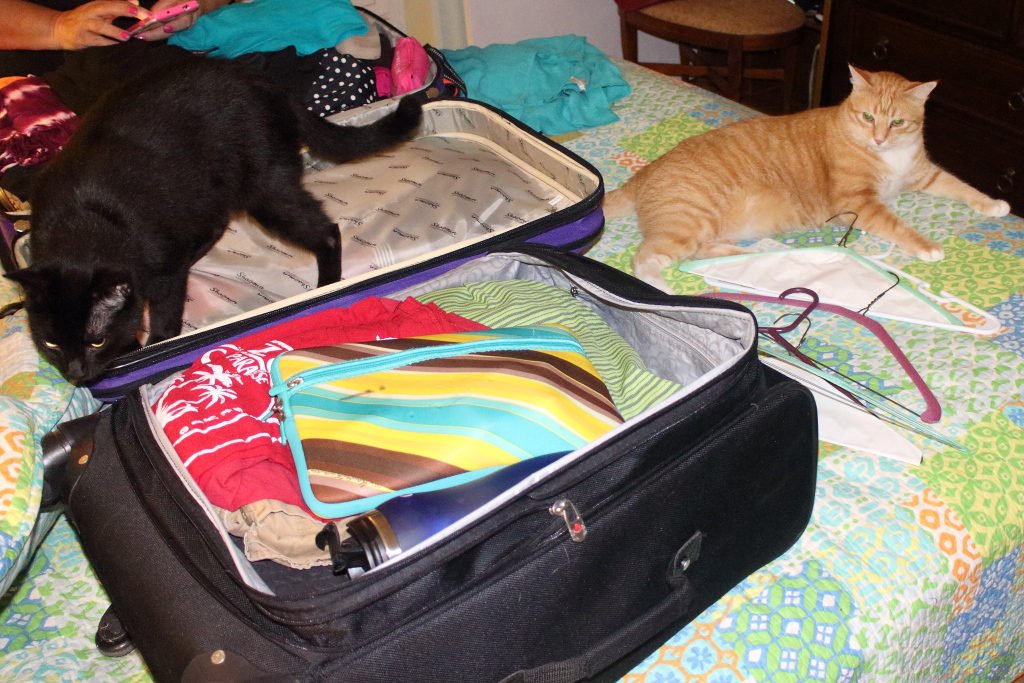 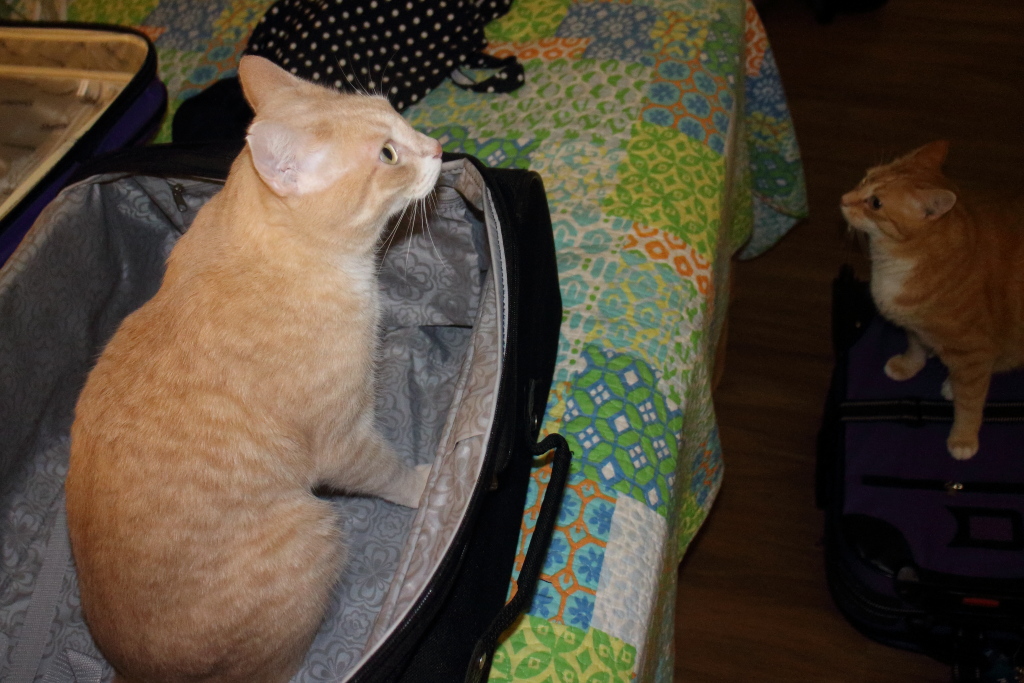 Of course, when there isn’t enough luggage space, problems are bound to occur.

They were also happy to see us, almost as much as the luggage and we were equally happy to be home with our little boys.

Rose and I are away this week on a Caribbean cruise. Since this is a scheduled post, I am actually writing this on Thursday while I am waiting to pick Rose up at the airport. She left for a business trip to San Diego (where her company is headquartered) on Monday morning and will return at 11:00 tonight. We then have to drive four hours or more across the state to Ft. Lauderdale. It will be our longest time away from the cats ever. 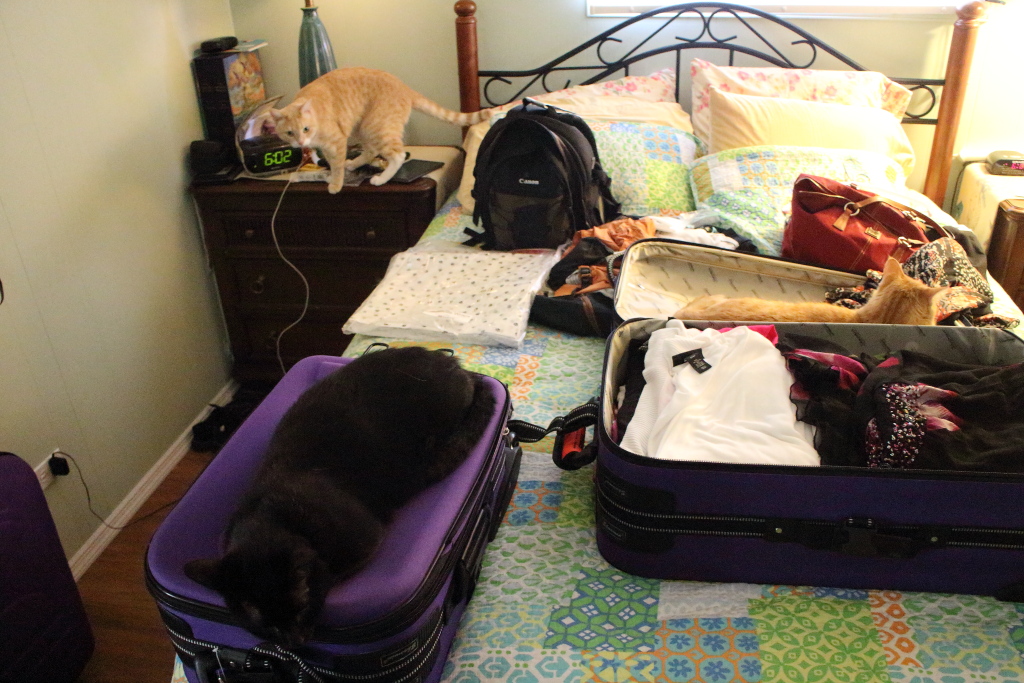 Packing for a trip is like a party for cats.

We have two people coming in to take care of them, one in the morning and one in the afternoon. We actually had an offer for someone to stay in our place while we were gone but I had two problems with that. First, we never met this person and only knew about her from a friend. How do you trust someone you never met? Second, I wanted two people in case something happens to one of them. I don’t want to risk my cats starving to death, even if the risk is low.

I alway put out a gravity feeder and waterer just in case. I may worry too much but it is better than not worrying enough.

We just returned from a week-long cruise on Saturday. We were supposed to go to the Virgin Islands but a hurricane forced us to different ports, but that is another story. By the time the cruise was over, we were more than ready to get home to see our boys.

We had no phone service for a week so we had to trust that our cats were being taken care of. Service returned Saturday morning when we arrived at Port Canaveral but we had no messages from the cat sitter. After we finally left the ship, Rose got a text from our backup cat sitter with a photo of each of the cats but no real explanation as to why she was there. At least we knew they were okay, that is all we cared about. We learned later that our cat-sitter had to go out of town that morning and just missed one visit.

When we got home Chris, Puck and Frankie were waiting for us at the door. It was like we had never left. They were happy to see us and wanted me to open a can of food for them right away. Even thought it wasn’t dinnertime, I couldn’t say no. I thought there was a small chance that at least one of them would be angry with us for leaving them but that didn’t happen.

Later I noticed that Chris had gained weight while we were gone. I have been concerned lately because he has plumped up a bit and I have tried to cut back on the dry food that I leave out. Chris does not eat enough of the wet food because he is addicted to the dry food. I have been slowly reducing his dry food in an attempt to reverse that problem, but my fear that something might happen to the cat-sitter promoted me to put out a gravity feeder in addition to their regular bowls.

Well, Chris seemed to take advantage of that. As I saw him lying on the floor like a beached whale, I petted his belly and said something about his weight gain. He didn’t like that. He growled and tried to bite me. I tried talking to him to calm him down but he kept growling at me so I just left him alone. Later he came and lied on my lap like nothing happened.

He also wasted no time in getting on the counter to beg for kitty treats and catnip. I guess everything is back to normal.

We took out the suitcases for our upcoming vacation and, as expected, all the cats had to lie on top of them. It happens every time. I think they know what is coming and they want to make sure we know that they don’t want to be left home again. 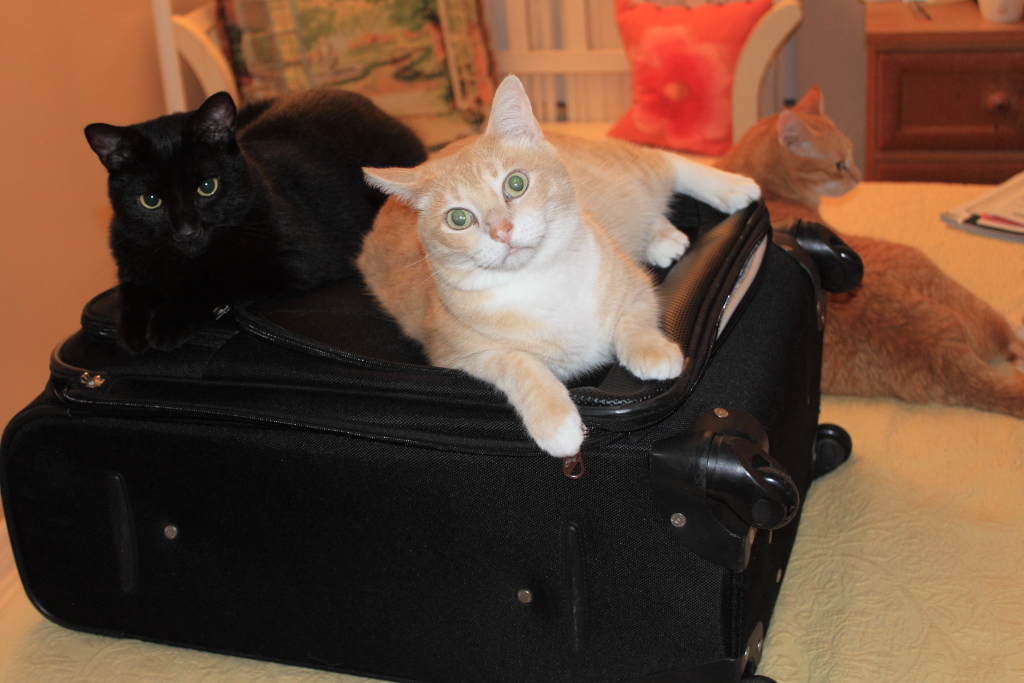 We’re going with you.

I’m staging a sleep in until you agree to take us with you.

I hate leaving them alone for so long. We do have someone who will come in twice a day but that won’t be the same for them. Honestly, I don’t worry about the diminished attention they will get. They have each other and they can survive a week with little human attention.

What I do worry about is the unpredictable. What if the cat-sitter accidentally lets a cat out? Worse, what if something bad happens to her? What if a burglar invades our home and leaves the door open? What if someone gets sick? What if there is a fire? The possibilities are endless.

Yes, I’m a bit of a worrier, and no, I’m not going to let it ruin my vacation. I will just make sure I do everything possible to lessen the chances that something bad will happen and leave it at that.

I’ve taken out of storage our gravity feeder and water dish that holds several days worth of food and water. The cat-sitter may be a bit insulted by this but that is the least of my concerns. I also plan on giving a key to the neighbor for emergencies. In addition, I will unplug everything I can to reduce the risk of fire. I can’t do much about burglars but hopefully our lack of valuables will be a good deterrent.

Hopefully I will be able to enjoy a worry-free vacation. If anyone has any other tips, please let me know.

Last week Rose and I took a short vacation. We stayed one night in Cocoa Beach, where we met up with Rose’s Dad and his wife, then we boarded the Disney Dream for a three night cruise to the Bahamas. It was a much-needed vacation but unfortunately we couldn’t bring Chris and Puck with us. That meant we had to find a reliable cat-sitter.

I am sure people who think of their pets as animals would be comfortable with googling pet-sitters and choosing the one with the best price, or better yet, finding someone they know that will do it for free. We think of our pets as children so the process for us was more like looking for a baby-sitter.

The last place we lived, the next-door neighbor had a seventeen year old daughter who would watch our cats. She was very responsible and loved cats, especially Chris. She would not only take care of their food and litter but she would also stay and spend time with them. Since moving, she was no longer an option so we had to look elsewhere.

By pure luck, we happened to live next door to a young mother who also happens to love cats. She agreed to take care of our “children” while we were away and we were sure she would do a good job but we still planned for the worst.

My biggest worry was that Chris or Puck would get out and she would have trouble catching them. I wanted to take the cats to get micro-chipped but we just never had the time. Another worry was that something bad might happen that would cause her to not be able to come, so we bought large food and water dispensers that would hold enough food and water for at least a week. It may have sent the wrong message to the sitter that we didn’t trust her, which was not the case, but even the most responsible person can be victimized by circumstances.

Rose called her the first evening we were gone to see how the cats were doing. She then told her we would be on the cruise so she would not be able to call the next day. After the call ended, I mentioned to Rose we would still have cell coverage for another day but she didn’t want the sitter to think we were checking up on her. I said nothing but I was thinking that checking up on a sitter is perfectly normal. I don’t think any parent would not call to see if their kids are okay and having cats is just like being a parent.

In the end everything worked out very well. The cats were fine and the sitter survived. Shockingly, she even offered to watch them again if needed.