I read somewhere that a cat can’t see as well as a human during the day but they can see effectively in light as low as one sixth the level of effective human eyesight. Another thing about a cat’s vision that is supposed to be better than a human’s is their ability to detect even slight motion in their field of view. These are facts that I am not certain about (and I’m too lazy to look them up) but if they are true then Frankie has a problem with his eyesight.

I always knew Frankie was not as good at catching lizards as Chris or Puck. Sure, he did catch a rabbit last year while at the same time evading capture from two people. That was impressive, but rabbits are big and easy to see.

I noticed lately on our walks that he doesn’t seem to notice lizards as well as you would expect. Even the indecent with the snake that I wrote about on Monday’s post made me think he was having trouble seeing it. Below is a video that shows a little of what I am talking about.

Just so you know, that’s not my house. What do you think?

Yesterday we broke with our new tradition of letting the cats outside on Sundays and let them out on Saturday. They all had a lot of fun running around, rolling in the dirt and chasing down lizards.

Frankie was good for the most part but, unlike last week, he ventured through the fence… twice. I didn’t worry about him though. I jut kept an eye on him and he came back before going too far. I did have to go through the gate and pick him up from the side of the property, both times, and bring him back to the back yard. He also used up a lot of energy and I saw him panting several times. I thought he was tired and would slow down, but I was wrong.

Last week both Chris and Puck caught a lizard but this week Chris was the only cat to bring home the prize. He did it by showing us he is still a bad cat. He wondered onto our neighbor’s patio and walked back out the door less than twenty seconds later with a lizard in his mouth, proving he is still the top lizard catcher in the family, despite his weight gain. I don’t totally blame Chris for going on her patio. If she would close the door that wouldn’t happen. 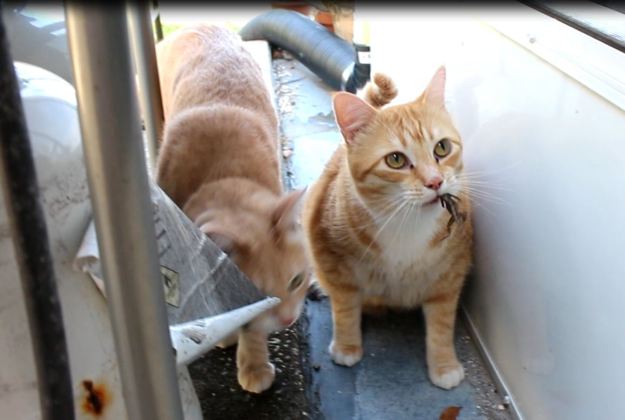 Chris showing off his lizard

I uploaded a video of what I go through with these boy but it is fairly long. If you don’t have the time I recommend starting at around 6:45. In case you don’t watch the video, I should mention the lizard is alive and well, assuming some other creature hasn’t eaten it since yesterday.