While we were on vacation we had two cat-sitters watching our boys. Lynn did a great job keeping us updated with texts and photos (see here) and Nancy was nice enough to bring gifts for the cats. Unfortunately, one of Nancy’s cats recently passed away and the other is not very healthy and does not use the items she brought over.

One of the items was a nice cat perch that I see the cats lying on now more than our other two small perches.

Next is a cat tunnel that everyone loves. 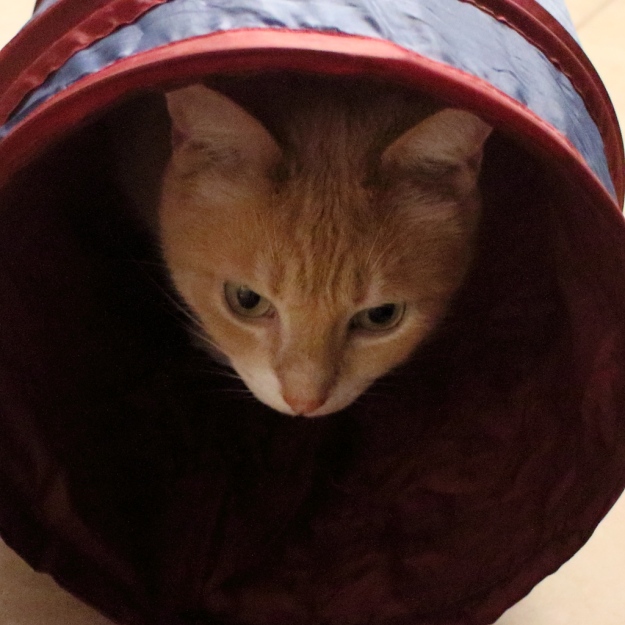 Finally she brought a nice scratching post. I will let Chris describe his feelings about that.

Our patio suddenly became too crowded so we decided to give Rose’s sister, Felice, the scratching post, one of our perches and a couple of other items. She said she could use them at the vet’s office where she works.

I started to bring the items outside on Saturday so I could put them in the car but the first time I opened the door, Chris came out of nowhere and zoomed out the door. I put down what I had and decided to leave Chris outside until I finished. He usually stays close and eats grass. I thought leaving him alone for two minutes would be easier that fighting with him every time I wanted to go out or come in.

Sorry about the quality

After I finished bringing the cat stuff outside as well as the garbage, I went back in and waited for Rose. She was involved in something, I don’t remember what, but it was probably another half-hour before we were ready to leave. When I walked outside I saw Chris lying there outside the door. I had completely forgotten he was outside. If he had wandered off, there was a chance we would not have known he was gone for several hours. I feel like such a bad parent.

We often do a cat count before we leave, mostly because they get into closets, so Rose probably would have discovered him missing but it is still a scary thought.