I have been feeding the feral cats near my work for a few months now and I thought I had the social structure figured out until this week. I’m starting to think that the inner workings of a feral community is as complicated as a human community.

Here is what I thought I knew: Cat number one, who I will just refer to as my little buddy, has been the reason I continue to put food out. He (or she) is the only one that comes around consistently. Almost every morning I can expect to see my little buddy waiting for me to bring out food. I have recently learned he hangs out near the tire store about 100 yards to the south. Sometimes when I pull into the parking lot, I will see the outline of a cat’s face and ears in the distance. I then go inside, grab some food and come back out. 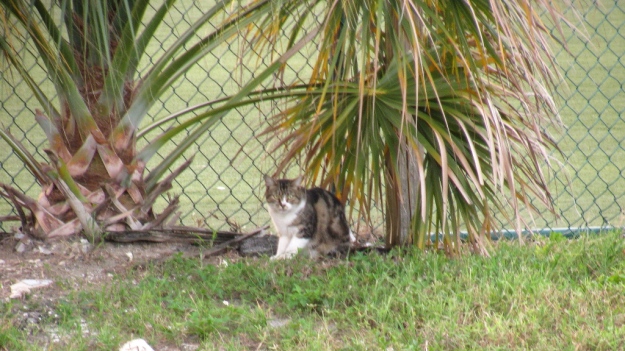 By then he has moved closer and he waits for me to put the food down. I usually put it on a Verizon box that makes a good platform. He then waits for me to go back into the building. Once I close the door he moves to the food. Occasionally, one, or both, of the other two feral cats that I know of will be around. One is a gold and white cat and the other is white and black. I determined these cats are friends or mates because when I first saw them, one ran away toward the other and they both disappeared behind the building to the north together. If they are around, my little buddy will submit to the other cats.

Lately, instead of bringing out a handful of food, I bring the entire bag. If I see another cat I will put an extra handful of food behind the dumpster so both cats can eat.

The other day I did not see another cat so I put out one handful of food and went inside. I watched the cat head toward the food and then suddenly stop when he reached the dumpster. I assumed another one of the two feral cats showed up to eat the food so I grabbed the bag and went out to put some food out behind the dumpster. To my surprise, I saw a cat that I had not seen before. That means my little buddy is shy and submissive to all cats.

Thursday, when I brought out food I saw my little buddy to my right and the new fellow to my left, near the Verizon box. I first put a handful of food behind the dumpster and when I did the gold cat ran out from behind there toward my little buddy. So much for knowing who is friends with whom.

I made sure there was plenty of food for everyone and went inside.

Yesterday I saw the new cat to the north and my buddy to the south but when I came out there was the gold cat waiting for me, who turned out to be far less timid than I originally thought. I put out three piles of food and the gold cat ate all of it. The other two cats never showed up. I put more food out but it didn’t get eaten before I left. 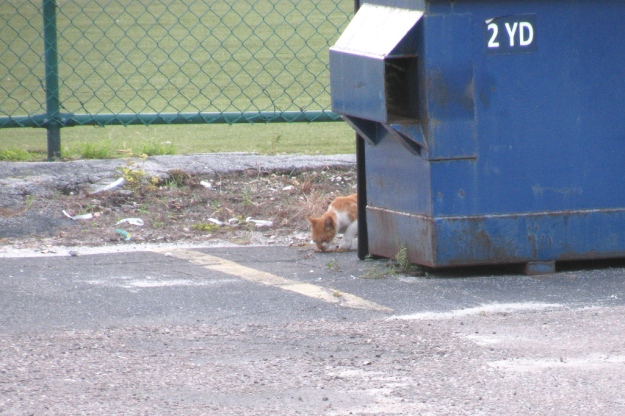 I guess I will never understand what is going on in the mind of my feral cats but at least I know what is going in their stomachs.

21 thoughts on “There’s a New Feral in Town”