I worry about my cats sometimes. I worry that one cat is going to seriously injure another, or worse, in a knocked-down, dragged-out, no-holds-barred fight. In some ways though, things are getting better. The fights are less frequent and Chris seems to be making an effort  to make friends with Frankie. In other ways, things seem worse. When they do fight it is intense and at least one cat ends up doing the cat equivalent of “screaming like a little girl.” That cat is usually Chris.

I heard them fighting last night after we went to bed and again very early this morning. When I got up and went into the living room I saw something that shocked me.

Let’s back up a little. The problems started when we adopted Frankie. Don’t get me wrong. Frankie is a wonderful cat and I really enjoy having him here, but we failed to consider an important issue before we chose him. We didn’t think about what would happen if we brought an alpha male into a house that already had an alpha male.

We didn’t know what type of cat Frankie was when we spotted him in the Petsmart adoption center. We just knew he was cute and friendly. We didn’t ask about his background or how he interacted with other cats. Frankly, I doubt if anyone knew that since they keep the cats seperated in the shelter. We also assumed that Chris liked everybody and he would accept a new cat just like he accepted Puck. But Puck is a follower, not a leader and the two of them get along well because of that.

Chris and Puck do fight sometimes but it is play fighting. There are also times when we will catch Chris on top of Puck, holding him by the neck and dragging him across the floor. (I have tried to get pictures of that behavior but it is always over before I get my camera.) I have no idea why he does that but Puck just lies there and lets him do it. It doesn’t seem to hurt him except for a little lost fur.

Frankie and Puck fight too, but again, it is play fighting. I often see one chase the other through the house and pounce. Then it repeats with the roles reversed. The fighting is controlled and there are no little girl screams.

I mentioned before that Chris is trying to be friends with Frankie, and that is true, but he will still attack Frankie for no apparent reason. For his part, Frankie is more tolerant of Chris but he is more often than not the instigator of the fights, and these fights are real fights, no playing involved. It starts with both cats waving their paws at each other. Then there is a pounce, a scream, and then the attacker backs away and the process repeats a few seconds later.

So what I saw this morning was more fur than I have ever seen at one time that was not attached to a cat. Below are photos of some, but not all, of the fur I saw in the living room. 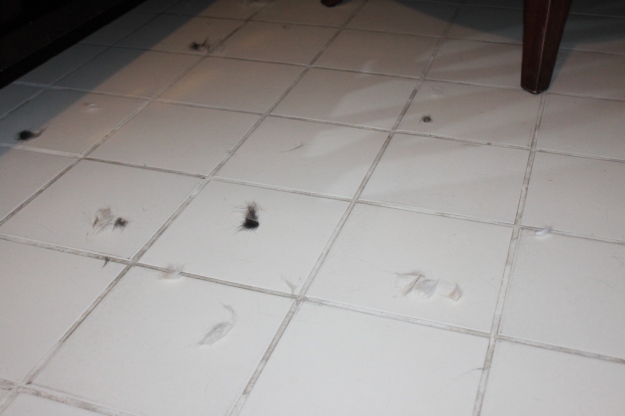 Some of the fur was black so poor puck found himself in the middle of the fighting. The rest belonged to Chris or Frankie or Both. I don’t know what happened but I am really starting to worry that someone is going to get hurt. Does anyone know how common injuries are from domestic cats fighting?

If you haven’t read my previous posts on the matter, here is a bit of a chronology, starting with Frankie’s adoption.

Did We Make a Mistake?

The Baddest Cat You’ll Ever Love… or Not

The Tables Have Turned

21 thoughts on “Everybody was Kung Fur Fighting”