Chris’s three-year reign of terror has ended. Okay, maybe that statement is a bit exaggerated but there has been a turning point in the Bad Cat Chris household.

Previously, Chris was able to dominate the other cats without fear of reprisal. He would often, out of the blue, pounce on Tigger or Abbey, pin them down and bite them on the neck. After a few minutes, he would then cozy up along side one of them like nothing had happened. Now that Abbey is gone and our new Kitten Puck is here, it is not so easy for him anymore. Puck fights back!

The two of them spend much of the evening going at it. Chris will attack Puck and Puck will counter with his own attack. I often see Chris as the submissive one during some of their many battles. It makes me think of Karma and the saying, “What goes around, comes around.”

Although it is no longer surprising, it is still amazing that at over three and a half years old, Chris still has the energy and personality of a kitten. The two of them seem like a perfect match for each other.

Now they are a great match, but I know that a year from now, puck will have matured and Chris will still be Chris.

On another note, I just learned that Alex died. If you read the post, The Great Upheaval, you would know that Alex had to be left behind when we moved back to Florida from Myrtle Beach. He stayed with a friend that we knew would take good care of him, and he did.

Alex was the brother of Abbey, who died two months ago (story here). Both were great cats and only eight years old. They will be missed. 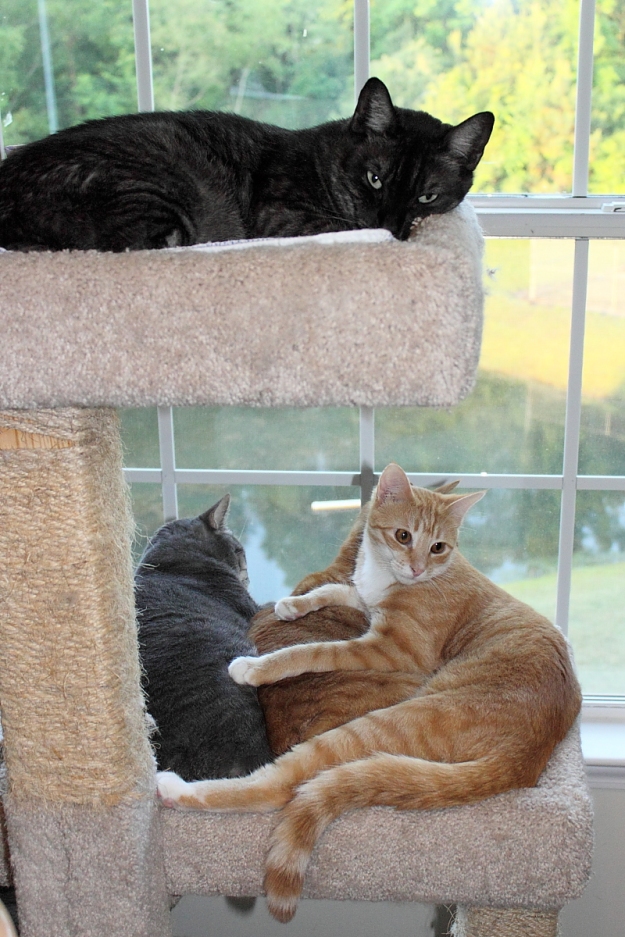 Alex (on top) with Abbey, Tigger and Chris

7 thoughts on “What Goes Around, Comes Around”