We recently got rid of some old furniture in our Florida room, including the sofa that started Puck pooping outside the litter box, and had a new trundle bed delivered. My wife went to Badcock without me and ordered it from a catalog They didn’t have a sample in the store.

It arrived the Thursday before last. Rose was in Orlando for business and I had to stay home and wait for delivery. When they arrived, I had to lock out the cats so the guys could come in and out as well as put everything together without being bothered.

Chris was very interested and Floki was not as nervous as I expected.

After it was put together and they needed a signature I asked where the mattresses were. They said it didn’t come with mattresses. I said I’m sure my wife didn’t intend to buy this without mattresses.

Sure enough, the salesman never informed her that the mattresses in the photo were not included. You would think he would want to make more money by selling more products. But on a positive note, the cats loved being able to climb through to the bottom. 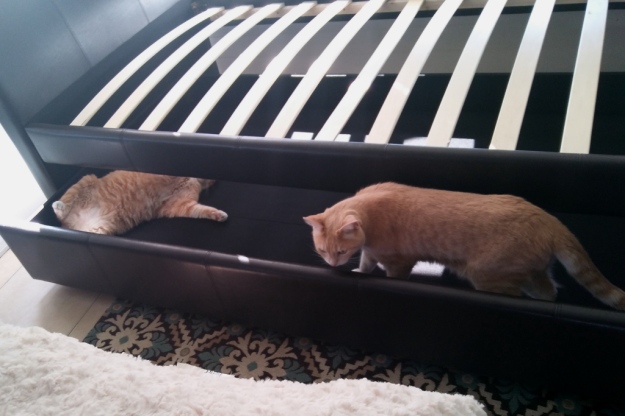 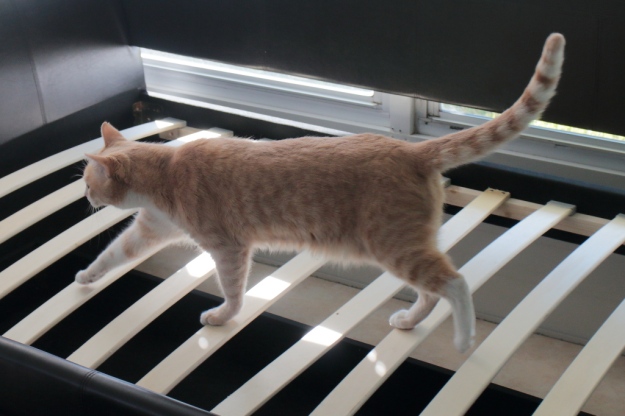 We also got a cabinet for the kitchen that was designed to look old. That way when the cats scratch it, nobody will notice.

We had to cover the trundle bed for a week until the new mattresses arrived but nobody minded, especially Chris. 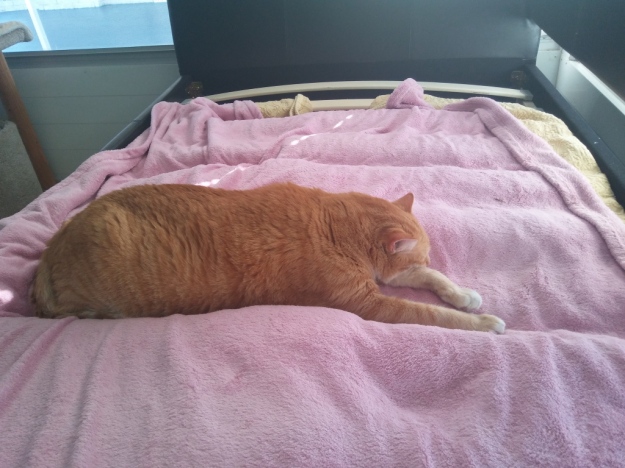 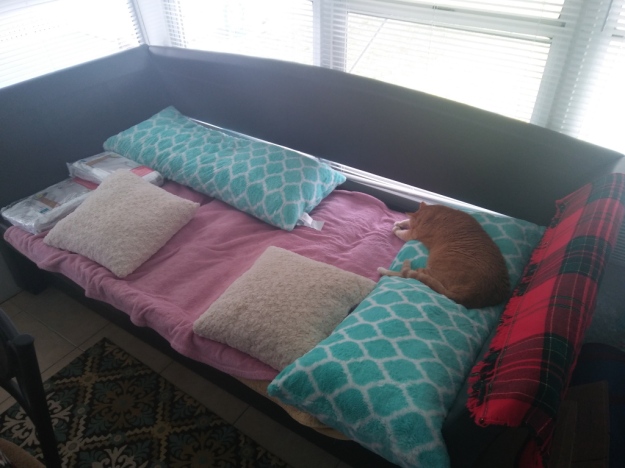 One day after the bed arrived, Frankie decided to make it unreturnable by digging holes in it. Rose was not happy with him.

When the mattresses did arrive, Rose put new sheets on them and covered the bed with a blanket. The next morning Puck pooped on it.

Now we have to have pee pads on it. This is our life with cats.

On a separate note, Puck did not pee outside the box between Monday morning and Saturday morning, but we did wake up the last two mornings to pee. Very disappointing.

It seems our cat’s weekly romp in the back yard has come to an end, thanks to Frankie. The last couple of times we let them out, Frankie led me on a wild goose chase, hiding under cars along the way so I couldn’t catch him. Last week was the final straw and Rose decided she did not want to let them out again. Of course, not letting them out and not letting them get out are two different things.

Three times in the past week Frankie got out the front door when we were trying to leave or come in the house. Two of those times Chris ran out the door at the same time. They double team us. When we try to block one, the other cat sneaks around us and out the door and then when we shift our focus to that cat, we end up losing both of them.

It seems weird that I am saying this but Chris is good. He always stays close to the house, at least for a little while. Frankie runs like the wind. The first couple of times he got out I was able to grab him right away because he was distracted by a lizard. The last time was on the weekend when Rose and I were leaving to catch a movie. Frankie led us both on a long chase.

I was starting to get worried because, despite our attempts to “herd” him the other way, he kept getting closer to the busy road we live near. Finally I was able to get him out in the open where Rose grabbed him and brought him home.

What concerns me now is we are planning to move to a new place. One without the big back yard and one that may be less tolerant of cats running around outside. I want to keep them inside but I also want to bring them out so that if they do escape they will know where home is.

We were awaken at 4:20 this morning by a loud noise in the living room. It wasn’t the kind of noise that wakes you up and you lie there and think, “Hmm, I wonder what that was.” This was a sit straight up in bed and yell, “Holy S%#!, What the H*#! was that?!” kind of noise.

Rose thought Puck jumped up on the china cabinet and knocked her porcelain stocking holder down… again. Unfortunately, that was not what happened. We got up to discover our Christmas tree lying on its side and Chris and Puck standing next to it like they were as surprised as we were. I don’t know who was responsible but those two tend to get frisky during the night and take turns chasing each other around the house. I’m sure one chased the other into the tree. 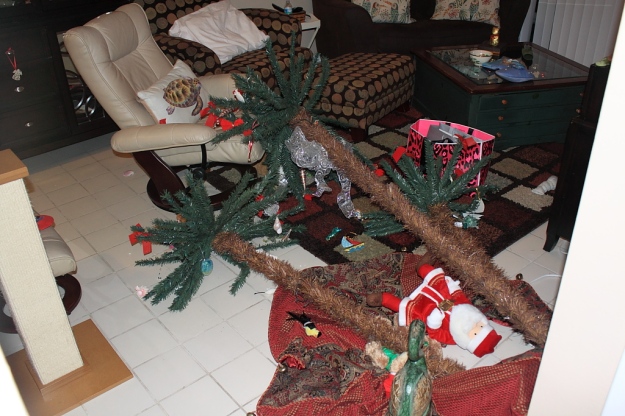 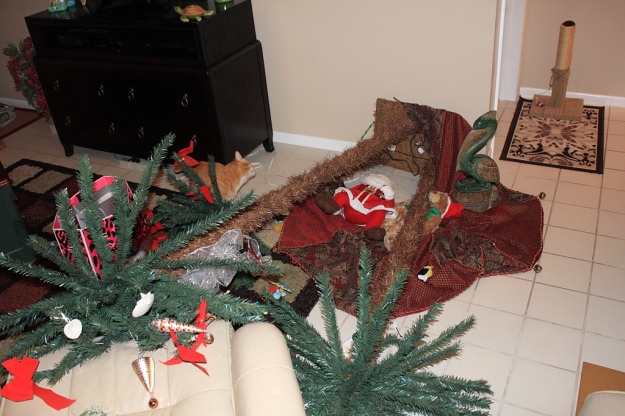 This was not how we wanted to take down the tree. We planned on getting a plastic box or bag designed for Christmas trees since I threw away the box it came in (the glue attracts cockroaches), but yesterday was Rose’s birthday and she didn’t feel like dealing with Wal-Mart, the only store near us that would carry such an item. I didn’t blame her, Wal-Mart is always a huge hassle.

The first thing we had to do was get as much broken glass up as we could before someone cut their foot. I missed a piece that Chris found and picked it up and started chewing on it. I tried to get him to drop it but he wouldn’t so I had to pick him up and shake him until he let go. Later, when we picked up all the candy canes, we discovered many had been chewed on. I think Chris was chewing on candy canes while we were putting ornaments away. Perhaps he thought the broken glass was part of a candy cane.

If there are any readers out there that have never had children and are considering it, I would suggest you get a couple of cats first for practice.