Our sudden loss of Puck on Thursday made me think about all the happy times we had with him. Sure, the pooping and peeing we had to deal with lately was not pleasant but that was nothing more than a symptom of his illness and perhaps some territorial disputes that were not Puck’s fault.  Even during those “bad” times, he remained a good cat.  I think he might have even become more affectionate. Puck was the first cat that we introduced to the family after I started this blog so I have a good resource to look back on his life.

Puck was a rescue kitten that My sister-in-law, Felice, bottle fed when he was very young. We visited Felice a couple of weeks before we adopted him (with no intentions of adopting a kitten at the time) and I took photos of a couple of kittens she was taking care of. The following photos are the first pictures of Puck that I have. These were taken on September 1, 2012. 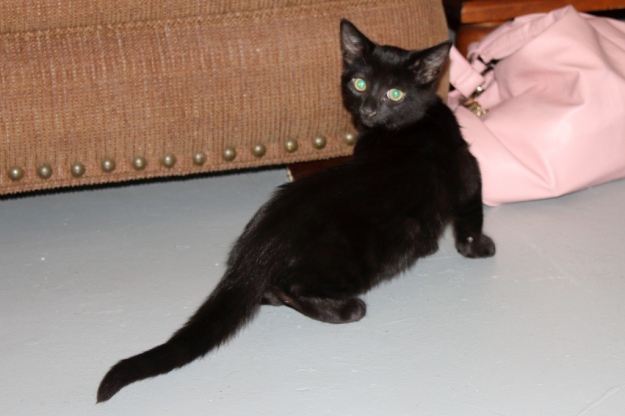 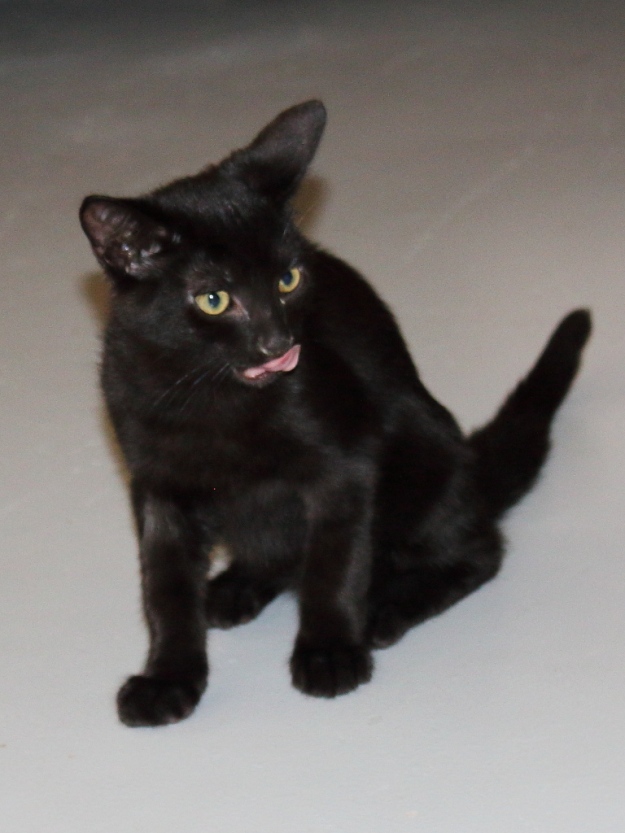 One of our cats, Abbey, was sick at the time of liver failure and passed away a week or so later. Puck just happened to reach the age when it was safe for him to be adopted at the same time. It seemed a bit insensitive to replace Abbey before we had time to mourn her but Puck, who was nicknamed Chowman at the time because of his love for food, needed a home and we had one to give.

We introduced Puck in exactly the way you are not supposed to introduce a new cat, but we have always been bad about that. Fortunately, Tigger didn’t pay much attention and Chris was happy to have someone new in the house.

Puck hid under the bed but was easily lured out with food. 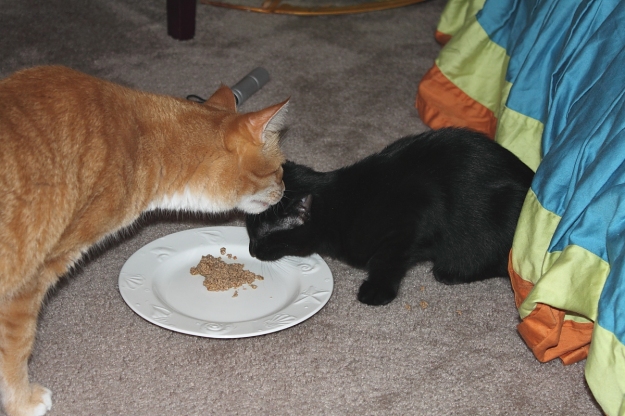 Chris greets Puck as he comes out for food.

Puck soon proved himself to be capable of handling Chris’s domineering playfulness and Chris learned that what goes around, comes around.

Puck also would play fetch when he was young.

And he enjoyed a good game of solitare.

He turned out to be the best behaved cat we ever had (not counting his litter box issues lately). He never bothered anyone or scratched where he shouldnt or tear up the blinds or anything like that, although he would sometimes follow Chris into the land of trouble. 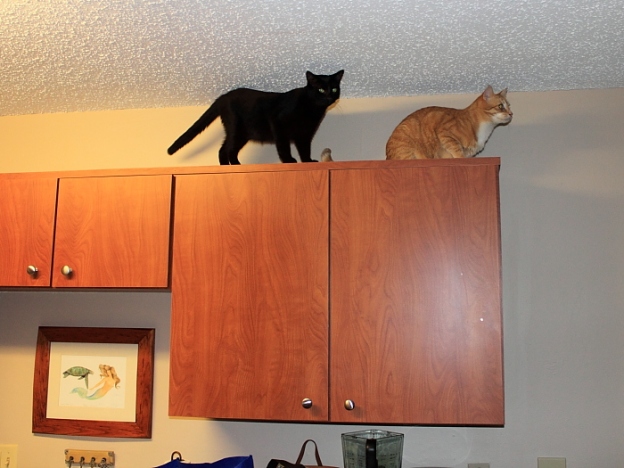 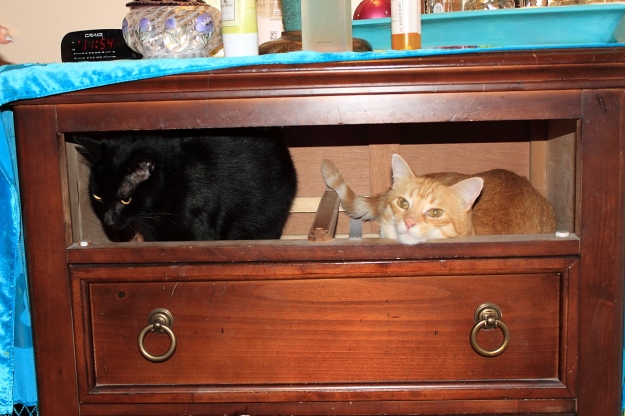 I would say Chris and Puck were best friends but I think it was more like a father and son relationship. I think Chris took Puck under his wing when Puck was a kitten and that relationship continued until the end. 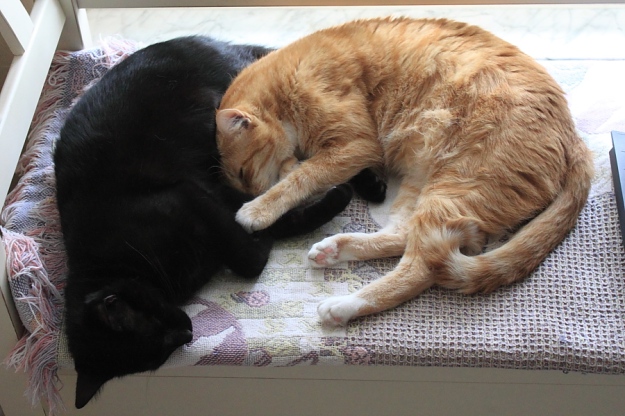 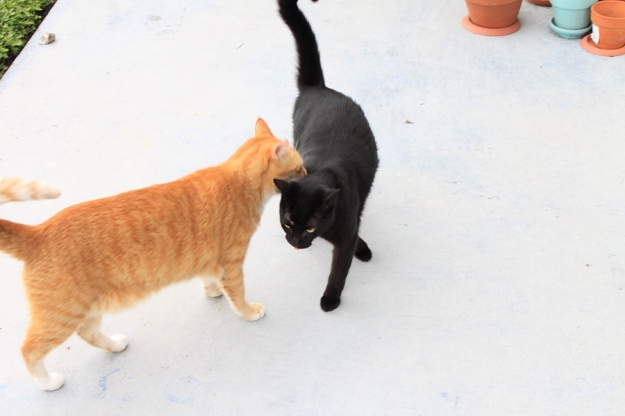 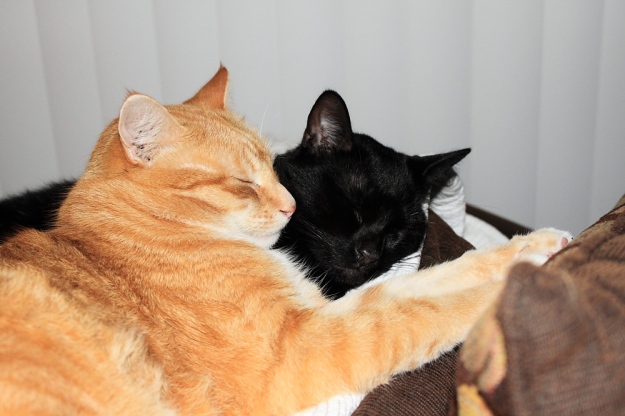 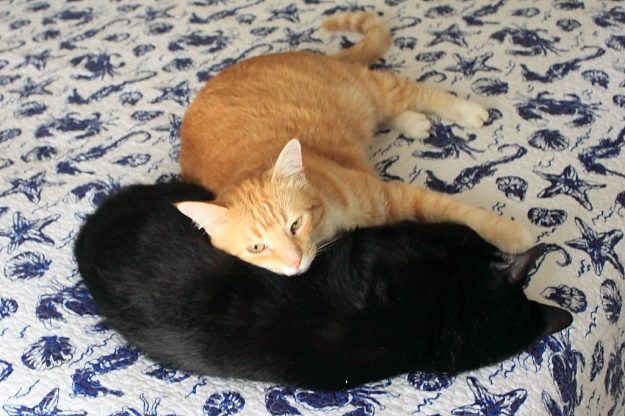 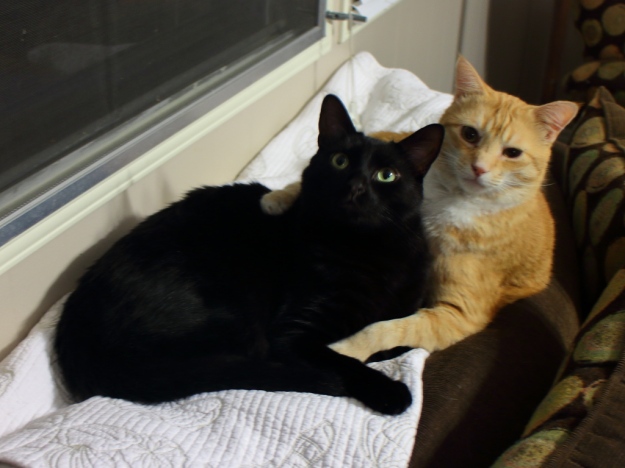 Puck and Chris did fight occasionally but it was always playful fighting. They were our only two cats that never fought each other to the point of hissing, growling and fur flying. In fact, the last couple of years I don’t recall them in any kind of fight. 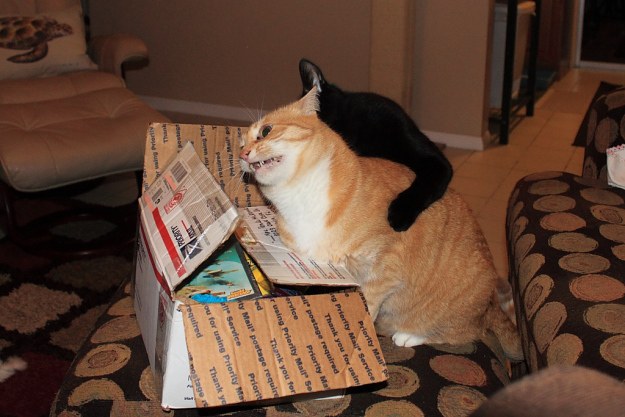 Puck never tried to escape but he did love going outside. Unfortunatly, when we moved into our current home he needed to wear a harness. The first time I put it on him and opened the door, a car drove by and freaked him out and he never wanted to go out again. He did get to experience our new catio for a few days (which I still need to write about). 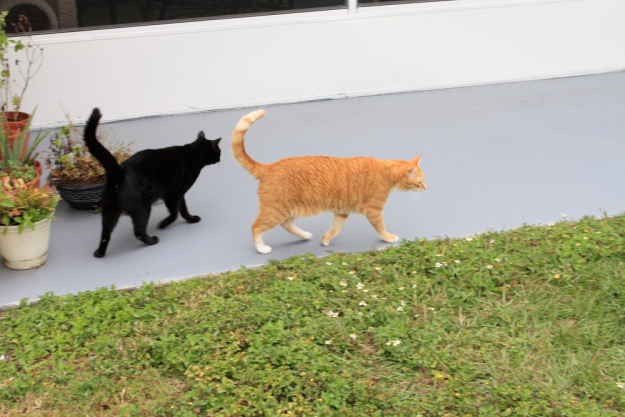 Puck had some favorite spots in the house, among them was on top of the cabinet where he needed my help to reach. He would stand on the kitchen cart (or whatever it is called) and look at me in a certain way while he opened his mouth to let out the quietest of meows. I knew what he wanted and leaned over so he could jump on my sholders. I then walked a coulpe of paces to the china cabinet where he jumped off. He liked it up there because sometimes he just didn’t want to be bothered. I made the mistake of helping Floki up there once or twice and Puck was not happy about it. 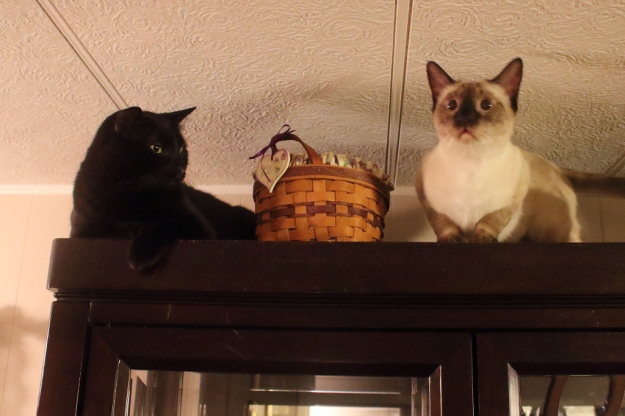 The last year or so he found himself at the vet quite a bit. First it was excessive licking. He actually licked off a large portion of his fur. 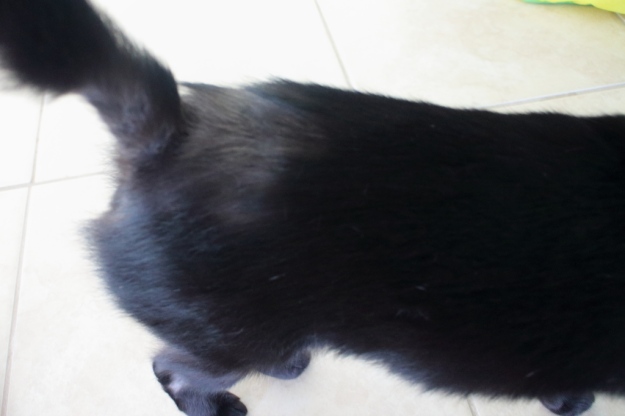 After at least three vet visits it finally cleared up after changing his flea medication. Appearently he had fleas even though nobody ever saw any on him.

After that is when his bladder problems started and he ended up at the vet six times for the same problem. He did not like the vet and would often hide behind me while we were in the exam room waiting for the vet. 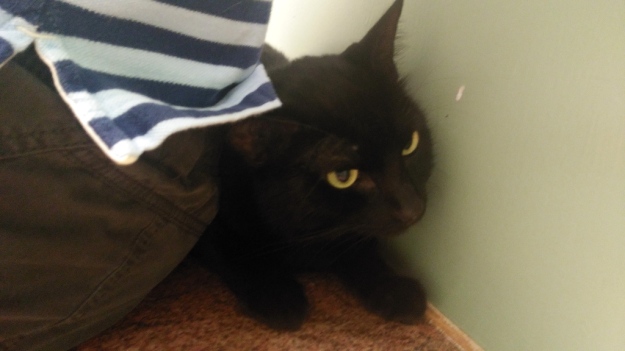 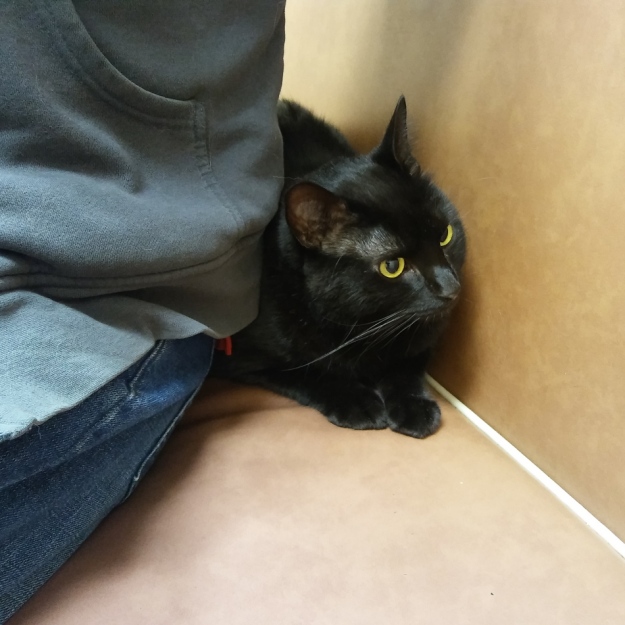 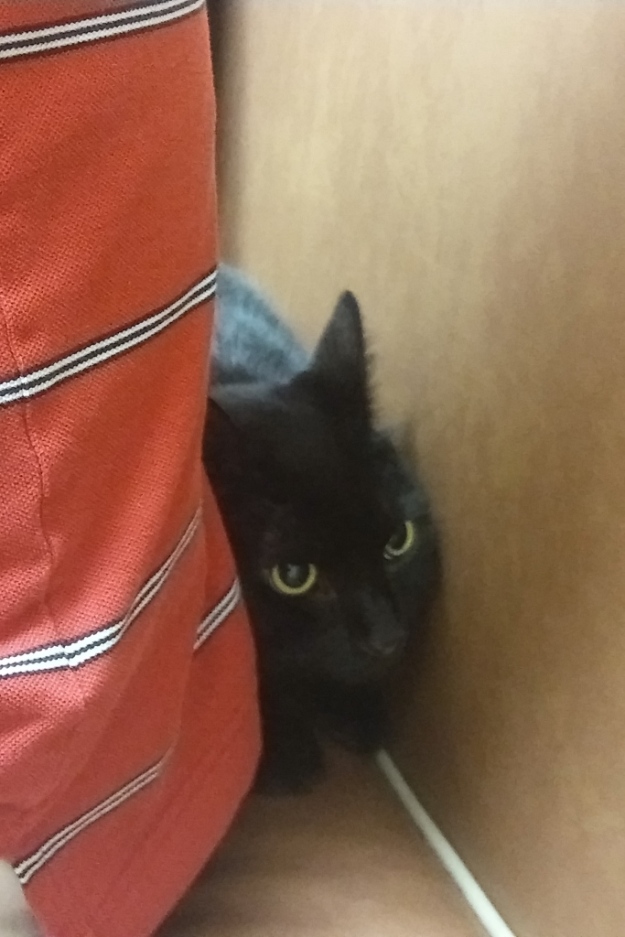 Now that Puck is gone, we wonder how the other cats feel about it. He left the house without any of the cats even knowing there was a problem and he never returned. I don’t think Frankie and Floki care too much but I did see Chris wondering around the house Thursday evening. He would stop every few paces and look around. I felt so bad for him. I haven’t seen him do that lately so maybe he has accepted that he is gone.