Recently I had to purchase something on Amazon and wanted to add something to my order so the total would be greater than $49, which would qualify for free shipping. I decided to try the Catit Design Senses Treat Maze. It was relatively cheap, not much more the I would have paid for shipping. It is also part of a system of cat toys that all link together, but I just bought the one piece.

It is designed to stimulate your cats while slowing down their ability to eat treats too quickly. I had another toy that did the same thing but through a different method. It was called Friskies Wobbert Cat Toy Pull and Play. Our cats liked it and I wrote a post about it here, but it worked best with the Friskies Party Mix. After putting a healthier treat, like Nature’s Variety Instinct Raw, they mostly ignored it, even though they love the freeze-dried treat by itself. I don’t know. Perhaps that treat has a more subtle smell.

When it arrived everybody was interested in it before I even opened the box, especially Frankie.

It needed some assembly but it was designed with men in mind. It was easy enough to figure out without reading the directions. 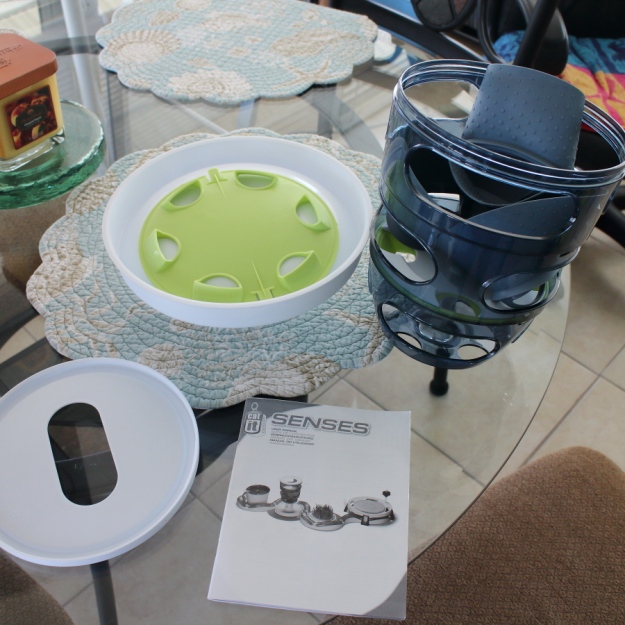 I had a bag of Instinct Raw Boost Mixers that I put in the top. Not surprisingly, our smartest cat, Chris, was the first one to figure out how it worked, but Floki, our resident kitten pig,  was the one most determined to get the treats out. Below is the first video I took after putting it together and adding treats. think it was pretty successful, even though it did not gain the full attention of all of our cats. In later videos, which I haven’t processed yet, Puck becomes interested in it. Frankie showed interest at first but gave up after a minute or two.  He has not shown much interest after that but I ran out of treats before giving him a chance to figure it out, so maybe he will like it in the future.

What do you think? Does anybody have this or something like it? How do your cats like it?