For Christmas, the cats’ Aunt Felice got them a Chia Cat Grass Planter. A great present because they all like grass and Chris loves it. Whenever Chris gets outside, the first thing he does is eat some grass.

It comes with everything you need: a bowl with a cat on it, potting soil, seeds and instructions.

I followed the instructions and put most of the “growing mix” in the bowl, leaving two tablespoons out for later.

I then added the grass seeds.

Next I covered the seeds with the remaining dirt. By then I had the attention of all the cats.

The instructions said to cover it loosely with plastic wrap so I did that and put it on the counter for a few days. I then put a little water in it and placed it outside where it could get some sun without someone eating it.

I think I watered it once more while it was outside but I pretty much forgot about it until the other day when I brought it inside. I also discovered that I was wrong about someone not eating it. It looks like one of the many rabbits in our neighborhood had a taste. 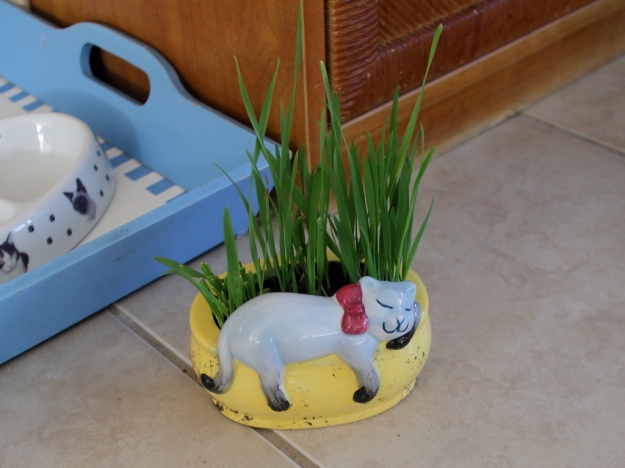 I barely had time to photograph it before Chris discovered it.

That sparked Frankie’s interest and soon they were both munching on the grass. Puck, unfortunately, was napping somewhere and missed  everything.

It wasn’t very long before they mowed the grass down and moved on.

The next day, I brought it back outside to let it grow again.

I started this post with the intention of reviewing this product but I think the cats did that for me. I will say that this is a little more expensive than the ones in the cheap plastic containers but I found it as low as $9.76 on Amazon. I like it because it is heavier and doesn’t move around too much when the cats try to eat the grass. I may decide to buy one or two more so I can rotate them in and out of the house.

What do you think? Are your cats grass eaters?