Out of our three cats, Chris is the only one I feel comfortable letting outside. Puck is okay when let out. He doesn’t go far but he is near impossible to catch when it is time to go in. Frankie can never be let outside. It is unfortunate but after leading us on a long chase through the neighborhood… twice, I feel if he ever got out again we might lose him. When Chris is let out he usually starts by eating grass, nothing worrisome there, but I do have to remind myself that he is still a bad cat and I need to keep an eye on him.

Sunday afternoon I had to bring the trash out and Chris was at the door crying to be let out so I thought a few minutes outside wouldn’t hurt. As unusual, he ate grass while I brought the trash to the barrel at the side of the building. On the way back I got into a long conversation with the neighbors. While this was going on, I kept checking on Chris, who was gradually working his way toward the side of the building. When he got far enough away, I ended my conversation and went to get him.

Naturally, Chris doesn’t want to get got so he runs away from me, which I expected. My main goal was to herd him toward the front door. I’ve noticed lately that Chris tends to be very casual while outside until he knows it is time to come in, then he desperately starts looking for a lizard while avoiding getting caught himself. A few times he has shocked me by actually catching one with such short notice. On this day there were no lizards in sight but he wasn’t ready to be caught yet so he tried something new. He ran up the side of the tree in our front yard. 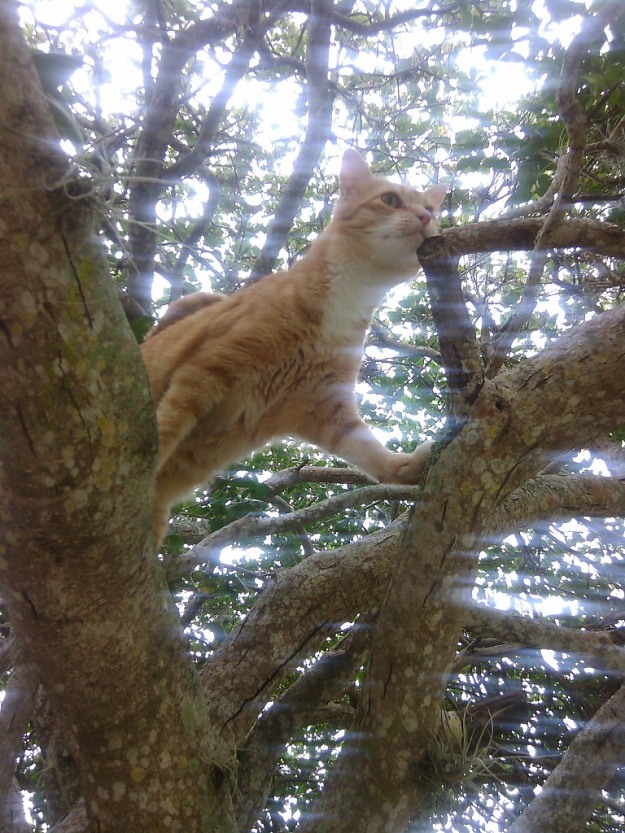 I was a bit surprised at first, especially because he went up it like he had done it a hundred times. I took my phone out and took a couple of quick pictures but then had to put it away because he started climbing higher and I wanted to get him while I could still barely reach him. He wasn’t too happy about being pulled out of that tree but unfortunately tree climbing is not one of the benefits of being an indoor cat.