This is the story of Bad Cat Chris. The name implies that this cat is bad so if I would say to you that Chris had been bad lately, you would probably say, “Duh!” From your point of view, you would be right to say that but when you live with a bad cat every day you tend to become immune to the behavior. So, the fact that I think Chris has been bad lately must mean that he has been really bad.

Perhaps Tigger’s death has affected him, I don’t know, but he seems like he doesn’t know what to do with himself lately. It is like he is a kitten again with all this built up energy. My wife and I like to read at night but lately he has been going back and forth between us, first interfering with her book and then, two minutes later, interfering with what I am reading. This continues back and forth until Rose gets angry and throws him down. This slows him down but soon he picks up where he left off. 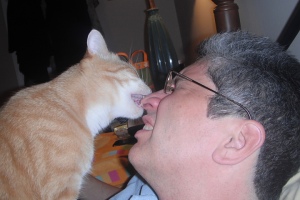 Of course, getting in the way is not enough. he has to also bite. For some reason, Rose is immune to most of the biting but I am not. If he is not biting my nose, he is biting my knee, ankle, shoulder or whatever else he can bite that will annoy me. He doesn’t always do this but sometimes he just gets in a biting mood. Those moods seem to be quite frequent lately.

I have been working on this post in the evening using my tablet computer that has an attachable keyboard. I sit on the bed and write while Rose sits on her chair and reads. When it is my turn to be bothered, Chris goes out of his way to step on the keys. This is my second evening trying to write and I think I will have to finish this post tomorrow on the desktop computer, even though Chris bothers me there too. Below is a Simon’s Cat video that does a great job explaining what I go through.

Chris also seems to spend more time getting into cabinets lately. He has become a pro at opening the doors and climbing inside but the doors shut behind him and he is not as good getting out as he is getting in. Often we hear the familiar bang…bang…bang. It’s Chris in the cabinet pushing the door open. Usually he has to step over a bunch of stuff to get in, but then he is behind all that stuff and he can’t get the leverage needed to open the door, so I have to find the cabinet he is in and let him out.

He has figured out where we keep the catnip. Until Rose moved it the other day, it was on the top shelf, above where we keep our spices. The video below shows Chris getting to the top of the cabinet above the catnip but it does not show him opening the door from above and reaching in it. A couple of days ago he was actually able to pull it out of the cabinet. That is what prompted Rose to put it in the storage closet.

We thought getting Puck would be good for Chris because he would finally have another cat that was willing to play with him. While that has been true, since Tigger is no longer with us, he now has nobody willing to nap with him and perhaps he needs more physical contact. I don’t have the answers but I hope we figure something out soon before he drives us crazy.