It has been over a week now and Puck is still pooping and peeing outside the litter box. If you haven’t read the first part of this story, you can see it here.

It a nutshell, Puck had crystals in his urine which probably made it painful to pee. It is possible he associated that pain with the litter box but if that is the case, why did he not associate the pain with peeing on the floor? The pooping on the floor has been an ongoing issue but the peeing is new and a much bigger problem because our laminate floors are already swelling at the seams where he has peed.

We started feeding Puck a special canned food the vet sold us from Science Diet. I have read many articles about how prescription diets are not good for your pet and I heard bad things about Science Diet but the vet said this would help acidify the urine and break up the crystals. If it did that one thing, it would be worth trying. 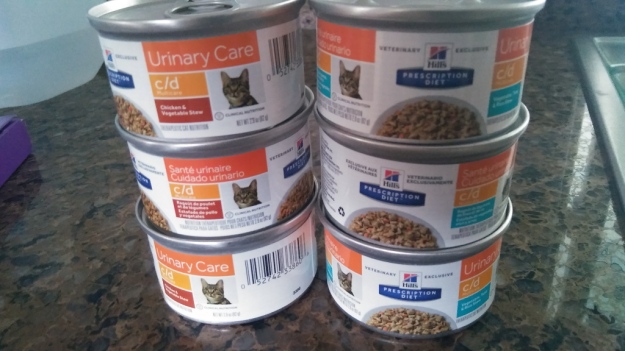 We also bought a package of pee pads that I spread around the house, especially in areas where he has already peed.

This past week has been filled with ups and downs. One day he would go 24 hours without peeing or pooping anywhere outside the box. The next day he would do both. I tried moving one of the litter boxes across the room. I thought maybe he might have suddenly developed a problem with the boxes’ location. 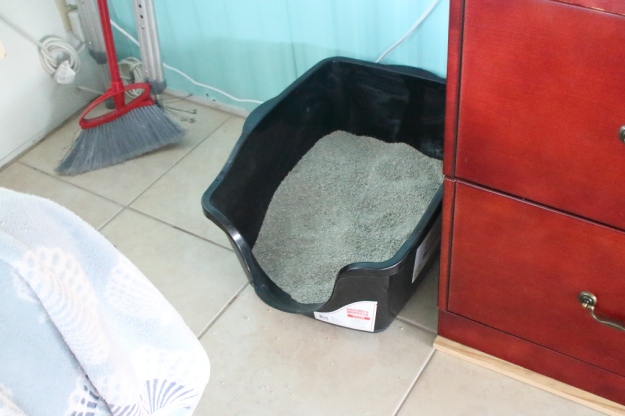 That didn’t work, so I moved it back.

One day he pooped next to the couch and peed on a pillow that was on the couch. He didn’t pee on the couch because I covered it with toys. I didn’t consider the pillow.

My wife said if he didn’t stop peeing on the floor he would find himself in a new home. She then suggested we might have to put him on Prozac because that is what her sister said might help. I said no to both. I understand Prozac might help but any long term medication is bad for the health of any cat . . . and person. I thought maybe a calming collar might be an alternative.

I read some articles online that offered some suggestions. I already tried most of them but a couple I did not know about.

I did not know that cats prefer one to two inches of litter. I usually fill it higher because it is easier to scoop if it is not stuck to the bottom. Apparently, some cats don’t like it when it is too deep. I didn’t think this was the problem since Puck never had a problem with it before but I thought every little bit counts.

A few posts said the litter should be far from their food and water but one post said it should be close. I decided far was the better choice. Our boxes are eight to nine feet from the food, Not close but no far either.

I also read the boxes should be spread out around the house and that they should be relatively private with an escape route in at least two directions. We put our boxes in one place because that is what ultimately stopped Chris from pooping on the floor. If one box was not to his liking, he could use the one next to it instead of the floor.

Rose and I went to Petco on Saturday and purchased another litter box and a calming collar, along with various other things. I put the box near Rose’s chair but on the other side of the end table. I then pulled the table out a little to offer an escape route in that direction. 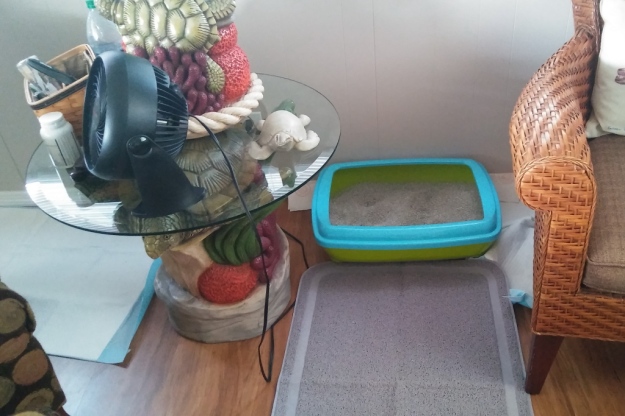 I then put the calming collar on Puck, which wasn’t easy. In addition, there was a big mess of white, flaky stuff that fell off the collar while I struggled with it.

I was very hopeful when I went to bed and was happy to see that everything was normal when I woke up. It didn’t stay that way. About and hour later I smelled pee and found pee next to the chair, half on the pee pad and half off, where it could get under the pad and have no chance of drying It was the third time that has happened since I bought the pads. I also found poop behind Rose’s chair. It looked like Puck pulled the pad away from the wall far enough so he could poop directly on the floor. Why does he have to make things so difficult for me?

I moved the litter box behind the chair to see if that makes a difference. 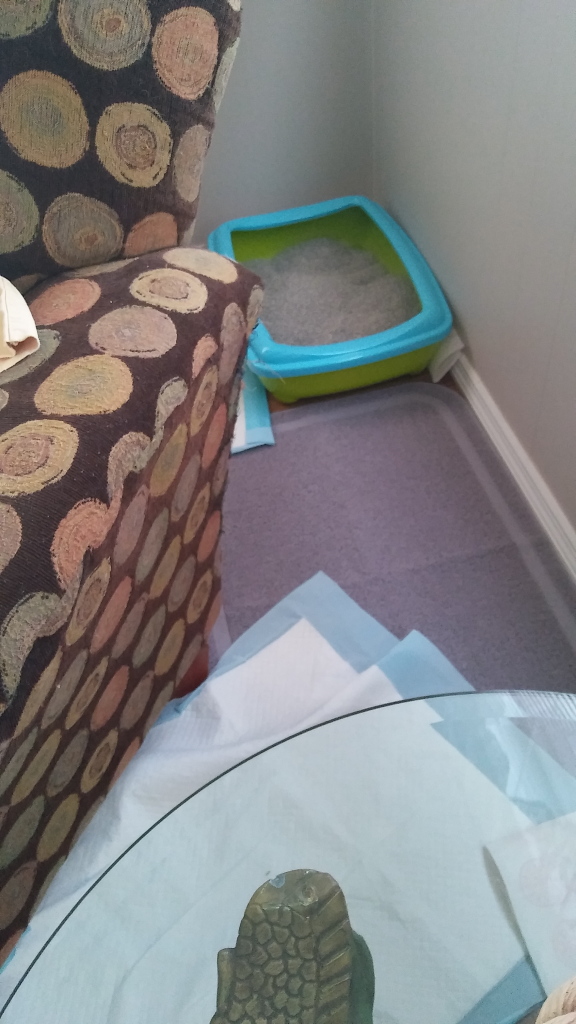 We are planning on buying some cranberry supplements today but other than that, I don’t know what else to do.