Yesterday Frankie and Chris both got their time outside in the sun. Frankie always goes first on a cat-harness and leash and then when we return I let Chris outside without a leash. It works out good that way because he usually runs out the door anyway as I try to bring Frankie in.

As soon as Frankie got outside and walked near my car he stopped to smell my front tire.

This smelling went on for a long time. 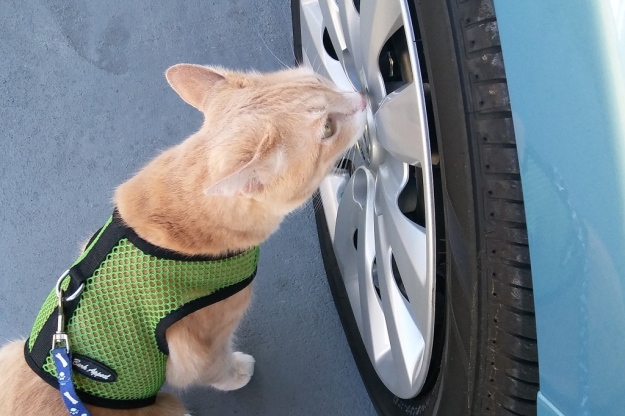 I thought an animal might have peed on my tire but I didn’t see any discoloration. This happened over Christmas on the front bumper of my wife’s car (see here). Frankie would not stop smelling the tire so I pretended like I was going to pick him up. That got him moving.

After our walk, I brought Frankie home and carried him inside. As predicted, Chris ran out the door. I removed Frankie’s harness and went outside to watch Chris. Once outside, I noticed Chris had already discovered the pee on the tire.

I knew it had to be pee at this point. 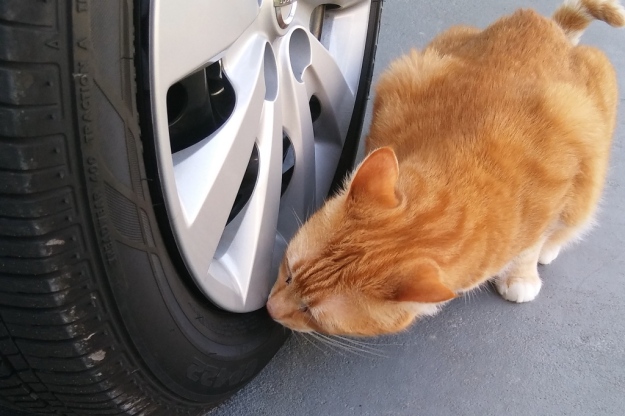 I just wondered who was doing the marking. Since it also happened to Rose’s car there is a good chance it happened in our driveway but I never see any loose animals around here that would do that. We live in a well-kept 55 plus community (because living with a bunch of people older than you makes you feel young). Outside cats are not allowed here and dogs must be on a leash.

Perhaps it’s a bobcat. I was told there were a couple of bobcats around here a few years ago. I can understand why since there is an endless supply of rabbits but I was also told nobody has seen them in years. I wonder about that after what I saw last week.

I don’t know what did this but it looks like a policy of indoor only cats is a good idea. I would hate to think of Chris or Frankie outside with a bobcat or some other large predator.