Christmas morning started out pretty normal here. I did my usual chores. I fed the cats, made coffee, changed water, scooped the litter boxes and washed dishes. When I was done, I noticed Puck had pooped on the floor in front of the litter boxes. Despite the poop being a good 12 to 18 inches away, Chris still mad a valiant effort to bury it by pulling litter out of the box.

We planned to be at Rose’s mom’s house at 11:00 for lunch so while Rose was getting ready she suggested that I take Frankie for a walk. I did promise him on Saturday that I would take him out “tomorrow”, and Christmas was technically tomorrow even though it was two days ago.

I don’t know how but he knew he was going out even before I got his harness out of the drawer. I think they just pretend to not understand our language.

Once outside Frankie was happier than a fly on shoot I forgot how that saying goes. 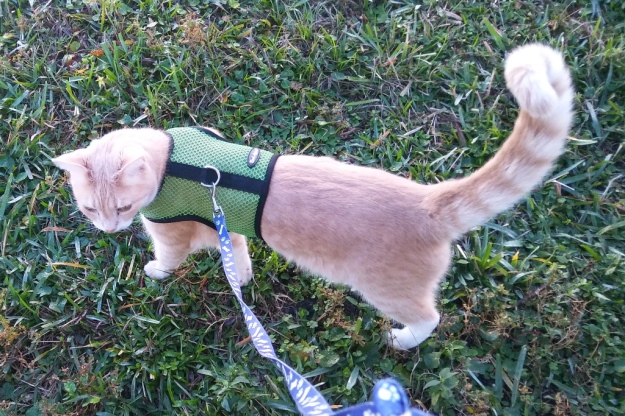 The first thing he did after stepping on the grass was to step back onto the driveway and walk toward Rose’s car. There he stopped for a long while to smell the grill.

I eventually convinced him to move along and we ended up walking away from home along the fence at the edge of the development. After a while Frankie found an area between two homes that he spent a lot of time just smelling the vegetation. 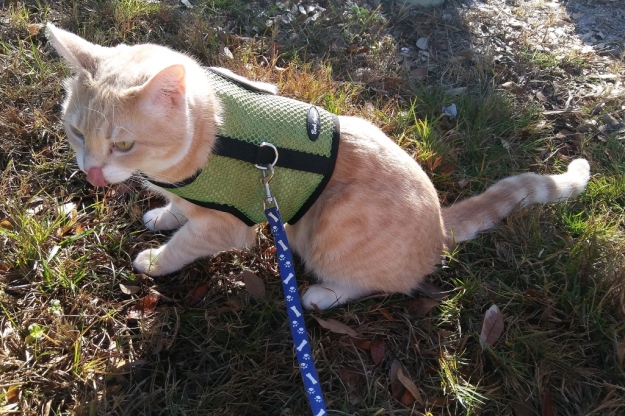 The local resident of one of the homes was not to pleased but Frankie didn’t even notice.

When we left the house, I could hear Chris crying about how unfair it was that Frankie was out without him, so I needed to get Frankie back so Chris would have time to go outside. Of course, I had to pick up Frankie and carry him home. Once home, Chris got his turn outside.

A little grass eating and then it was off to see what he could see. The first stop was Rose’s car.

Now I new some kind of animal marked her car. I got down to take a closer look and there it was. 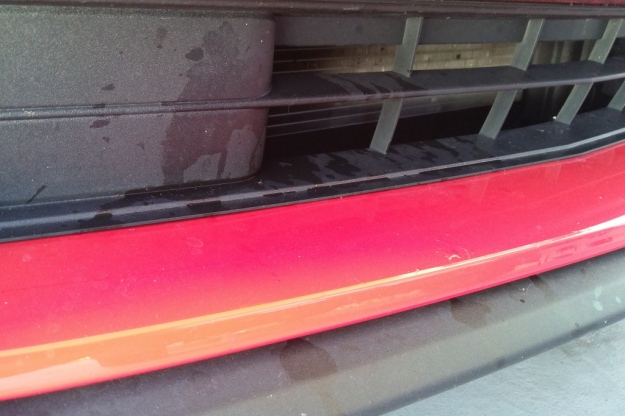 Then it appeared that Chris started licking it. I may have not seen it right but I can’t imagine a cat wanting to lick that so I started worrying that Rose’s car was leaking radiator fluid. I have heard of cats being poisoned by drinking that stuff. I immediately picked up Chris and put him down at the front of the driveway and then opened up the hood to see if there was a leak.

There was no leak but now Chris was no longer in sight. I found him at the back of the house. I decided he would be okay there long enough for me to go and close the hood. 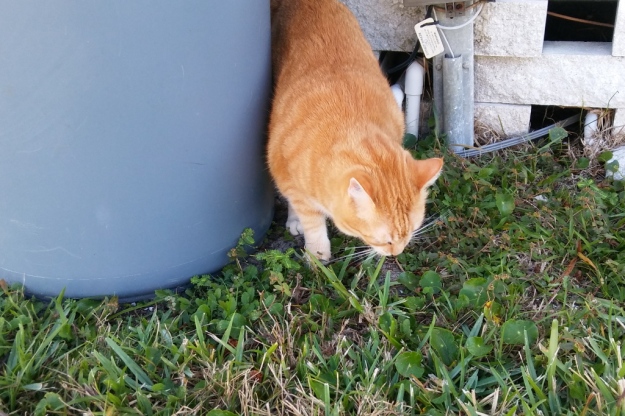 I returned just in time to see Chris disappear under the house. He found the only hole big enough for him to fit through.

Now Chris is exploring under our house and Rose is calling me telling me I need to get ready to go or we’re going to be late. I tried calling Chris to come back through the only hole that he fits through but anyone with a cat knows that you can’t call a cat, unless it’s for dinner.

I walked back and forth around the house trying to see if I could see Chris and if there was a way to get him out. I decided I would have to pull out bricks if I couldn’t get him out through the back of the house.

After many long minutes and several more calls from Rose, I decided to try treats. I went in the house and brought out our bag of freeze dried Stella and Chewy’s Duck Duck Goose Dinner. If that didn’t work, I didn’t know what would.

I pulled one brick sideways near the door, just enough to create an opening big enough for Chris and then called him while shaking the bag. “Chris! Kitty Treats! C’mon, here you go!” I then opened the bag and put some on the ground. At just about the same time Chris was crawling through the hole I made and eagerly gobbled up the treats. So now I re-enforced his bad behavior by rewarding it.

When I was in volunteer training for The Humane Society, they recommended bringing dog biscuits for the dog walkers in case they escaped but anyone taking care of cats need not bother because a dog will give up his freedom for a treat but a cat won’t. I guess they didn’t know about Stella and Chewy’s

About an hour after arriving at Rose’s mom’s house, her cat, Pumpkin, decided to show his face. Pumpkin is a friendly cat but he is not much of a lap cat, but he took a liking to my lap while I was there. 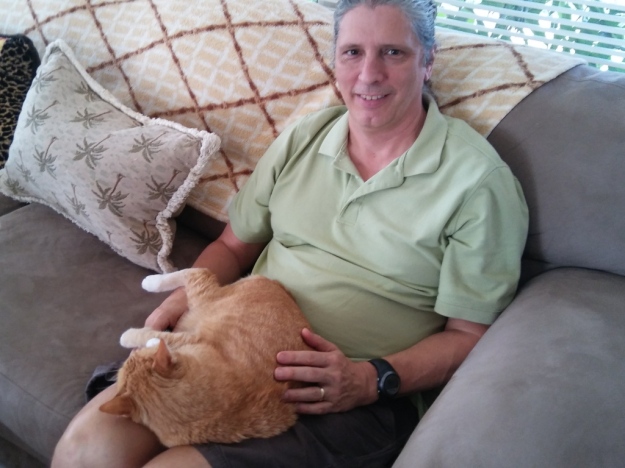 The last time we went shopping, I bought a can of pink salmon for the cats for Christmas and I opened it for them when we got home.

They all loved it.

The rest of the day was pretty uneventful, but that was fine with me.

By the way, I discussed with Rose later that day where she might have been parked that a cat would want to mark her car. That is when she remembered that we were at The German Restaurant the evening before. Our tradition is to go to The German Restaurant on Christmas eve and then go to the 7:00 service. It is our favorite restaurant for several reasons that don’t include cats but we love that they have several strays that they take care of.

What about you? Was your holiday as fun as mine?

21 thoughts on “Our Christmas With Cats”