I think we have the worst toilet in the Western Hemisphere. I seem to constantly need the plunger which Rose seems to think is best kept outside in the shed. Rather than argue the logic, I just go to the shed to get it, which is what I did Thursday morning, not long after we had a bad rain storm.

I was able to successfully plunge the toilet and everything went down except one thing that I hope wasn’t there the entire time; a frog. I assume it crawled into the plunger and then came into the house with me. I’m just amazed that it didn’t go down with the flush.

I grabbed a tissue and tried to grab it but it jumped out of the toilet and grabbed Frankie’s attention, who likes to hang out with me sometimes in the bathroom for some strange reason. Frankie lunged for it but missed. It hopped behind the toilet and I tried grabbing it as it came around to the other side but I missed too. Finally, Frankie was quicker than I and walked away with the frog in his mouth. I was a little concerned that he might eat it and get sick but I think the only poisonous frog in the Tampa Bay area is actually a very large, non-native toad, which I actually saw hopping away from the shed when I went to get the plunger.

It seems nothing attracts a crowd like a frog.

I managed to get the frog from Frankie before he ate it and put it outside. I thought it was dead but it was gone the next time I looked outside.

A little later I noticed a fly in the house. The cats noticed it too and were trying to catch it. I thought it was actually good that it was there to keep the cats from being bored. I would soon change my mind about that.

I took a lot of pictures but most came out blurry because of the action.

Chris finally had the fly cornered on the patio while Frankie and Puck were interested in something else a few windows down. Chris caught the fly, played with it a little, and then ate it. Yuck! 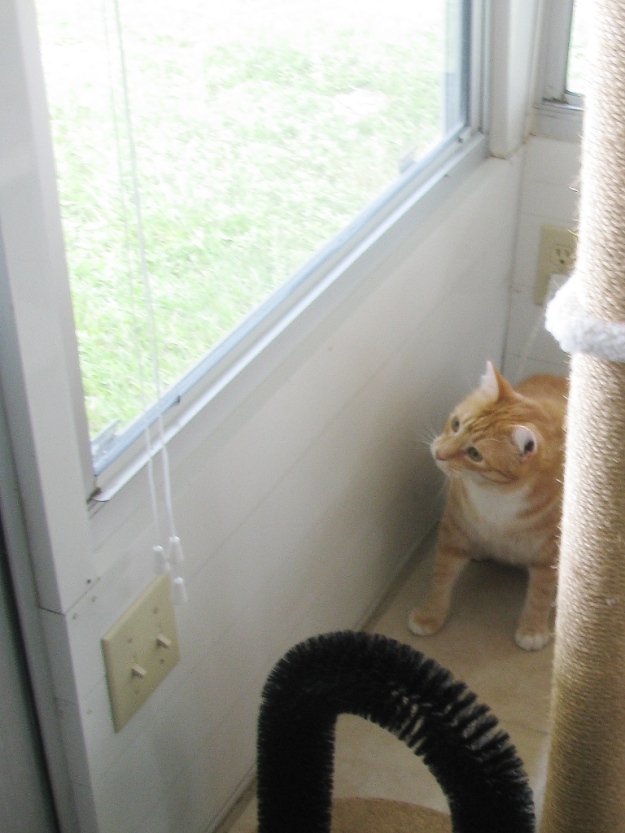 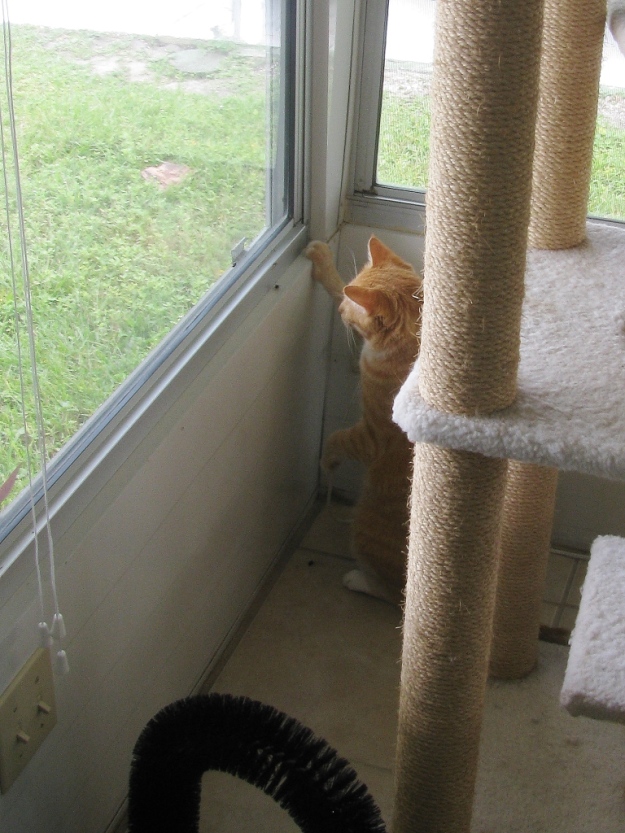 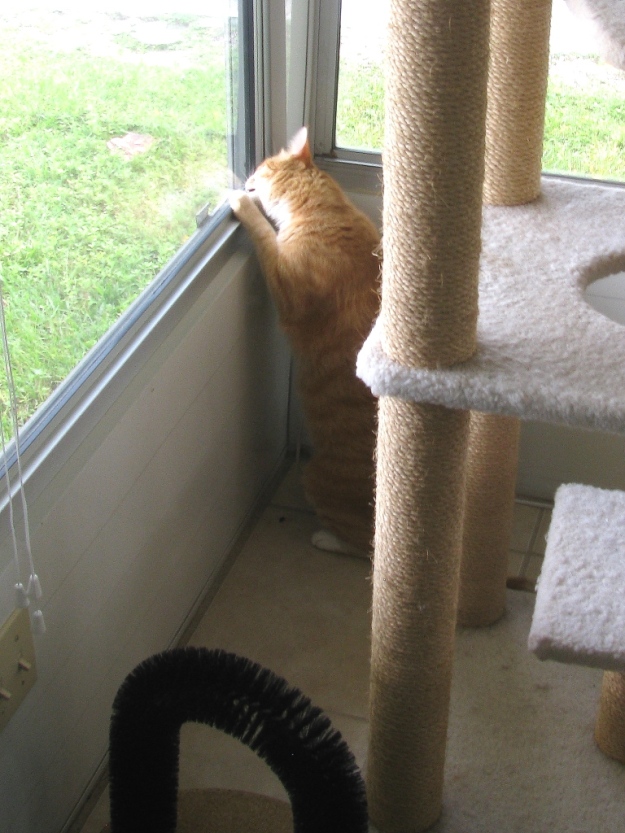 That is when I noticed there was another fly on the same window and a third fly was at the window where Puck and Frankie were. When I looked back, the fly by Chris had a buddy. The next several minutes were pretty exciting as our three cats chased the three flies around the house. They caught two of them and I had clean-up duty.

It seemed like every dead fly spawned into three more flies and I began to feel like I was in an Alfred Hitchcock movie and I thought a frog would be a big help but that was not to be.

I checked under the cabinets to see if I could find where they were entering the house. Nothing. I walked around the perimeter of the house but saw only one fly outside. Perhaps they were all inside. It was trash day and our next-door neighbor just moved out and left a big pile of trash outside. Maybe that is where they came from. By then the garbage men had picked it up leaving the flies with nowhere to go.

It seemed the mystery of how the flies got into the house would have to wait. I had to take over as fly killer because the cats got bored with it after fifteen minutes or so. Over the next hour, I counted twelve dead flies that the cats and I took care of and saw no more flying around. I was just starting to clean the house when I noticed the problem and so I went back to finishing that project. When I finished, I sat down to relax and noticed number thirteen flying around. Puck noticed it too and gave chase. I just let him take care of it.

I don’t know if he got him but later that evening I saw a fly and saw it again the next morning. When I came home from work Friday evening, there was a dead fly waiting for me to clean up. Rose later told me she picked up two more dead flies. All were apparent victims of cat attacks. There will be a memorial service for the victims at the end of Nevuary.

22 thoughts on “Lords of the Flies”