My wife, Rose, runs one of the largest apartment complexes in the area. Recently there has been an increase in the feral cat population on her property.  I told her that she could get traps from the Humane Society and once caught, we could have them fixed (out of our pocket, of course) and returned to the property. Unfortunately, Rose has so much work and is chained to her desk eleven hours a day that she has no time for anything else.

Yesterday evening, while eating dinner, Rose got a call from Luis, her maintenance supervisor. He said a resident had informed him of an abandoned kitten. When he got there, he found blood on the sidewalk and a solitary kitten with no mother in sight. He decided to take the kitten home and call Rose to ask for advice.

I know it is very difficult to raise a newborn kitten without its mother. Many don’t make it. I also know that some people will take the kittens thinking that they are helping, not knowing that the mother is close by, perhaps hunting or just hiding, waiting for the humans to leave. She could also be in the process of moving the kittens. In this case, it seemed the mother was not returning.

Rose hung up with Luis and called her sister, Felice, who is an expert in rescuing newborn kittens. She works for a vet and has brought many kittens back from the brink of death, while also losing a few along the way. She told Rose to bring the kitten to her and then started the process of turning her bathroom into a makeshift nursery. Our Puck was saved in Felice’s bathroom.

We immediately put our food away and headed to the property to pick up the kitten. Luis had it on a towel in a small box. He handed it to me and Rose sped away, driving her Mustang like it was an ambulance. She was very careful not to break any speeding laws (fingers crossed) while we raced the 24 miles to Felice’s house. 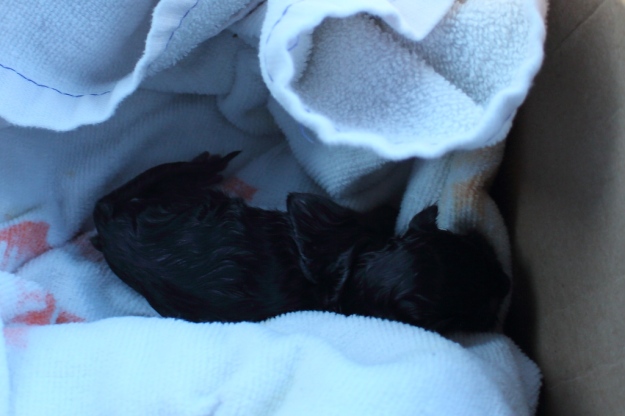 When we arrived, Felice picked up the kitten and said it was too cold. She brought it into the “nursery” where she had a cat carrier set up with an electric heating pad on the bottom topped with a towel and another towel or two covering the top of the carrier, making it an incubator.

She put the kitten inside for a few minutes and then took it out and gave it some formula. She squeezed a small amount of the mixture in the side of the kitten’s mouth.  Putting it directly in the mouth was not good. I believe she said it could introduce air bubbles into its stomach. That is not what she said but that is how I interpreted it. After only a couple of drops of food, she put the kitten back in the incubator for about fifteen minutes. She then took it out and gave it more food. 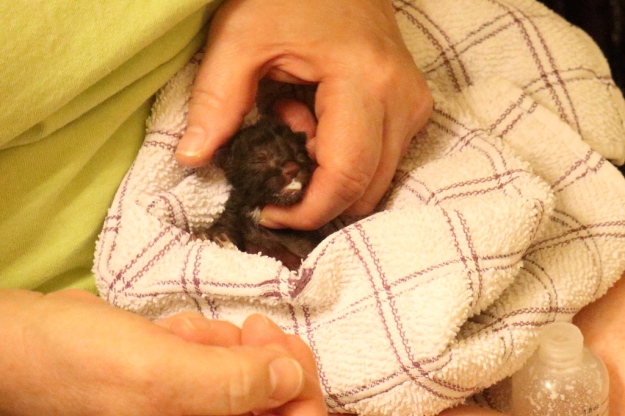 Taking care of a newborn kitten is a lot of work. Felice says it will need to eat every two hours for the first couple of weeks of its life. Once it is old enough, we might have to adopt it if we can’t find someone to give it a home. We do not want to leave that burden with Felice but I hope we find it a home because we already have more cats than allowed. I would hate to be forced to get rid of cats after they have become family members.

By the way, if the cat is a boy, Rose want’s to name him Luis.