Sunday we let all three cats explore the back yard again. Frankie still needs to be on a leash so he doesn’t run away but Chris and Puck were free to play while Rose kept an eye on them.

Frankie is getting used to the leash and harness and did not get as freaked out by the sudden stop like he did in the past. The three of them spent some time, just like last week, trying to catch lizards. Unfortunately for them, the lizards were a bit quicker than they were last week when Chris and Puck both caught one.

Where are you lizard? 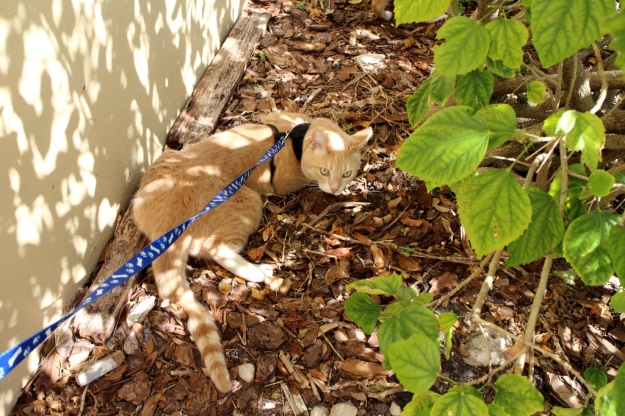 Everything went well until after we brought the cats inside. That is when, after noticing how desperate our plants needed water, I decided to go back out and water them. I should have been more watchful for bad cats because on the way out Frankie surprised me and slipped out the door with Chris right behind him. Fortunately our neighbor left their patio door open and Frankie went inside to explore. I didn’t have my camera so I was not able to get pictures of him trapped in someone else’s home.

I didn’t want to possibly break the law by going inside so I went around the other side and was able to get him to head towards Rose who scooped him up coming out the door. Hopefully someday I will be able to let him out without worrying he will run away.

8 thoughts on “Three Cats, One Yard, No Lizards”