We know nothing about Frankie’s back story. We adopted him at Petsmart from The Pinellas County Animal Services. The person at Petsmart did not know anything about him so we just didn’t think much about it, although I did send a Facebook message to the animal services with his reference number but, even though they have an active Facebook page, I got no response. 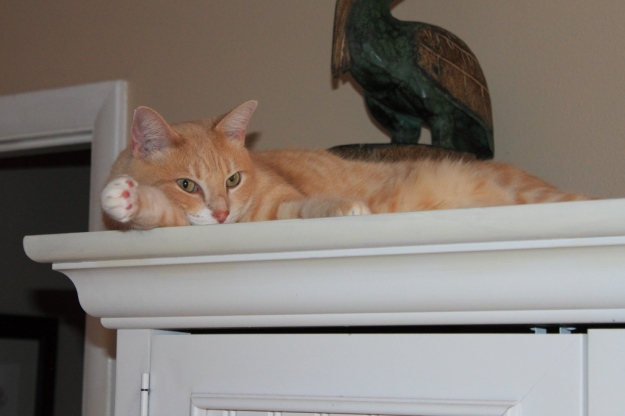 I couldn’t help being perplexed, though, by the ear notch on his right ear. I have heard about ear notching before. It is the method of cutting a notch in a cat’s ear after spaying or Neutering. Sometimes it is called ear tipping when they remove about a centimeter off the tip of the ear.

Ear notching or tipping is mostly done to feral cats involved in a Trap, Neuter, Release (TNR) program. It identifies that they have been fixed so they are not trapped again and put under the knife a second time. I prefer the notch because it is less disfiguring but a ear-tipped cat is easier to identify from a distance. It is also more likely that a notch could be mistaken for an injury or vice versa.

The notch got me thinking. If he was a feral cat, why is he so friendly? Of course, not all notched cats are feral, some are strays, but if Frankie was caught as a stray with the intention of fixing him for adoption, why would they notch his ear? Perhaps it isn’t a notch. After all, it looks more like a slit than a triangular notch.

I did a little research and found that ear tipping on the left ear is most common but there is no universal standard. Frankie’s quasi notch is on his right ear. That led me to believe it was more likely the result of a fight and didn’t think about it again until we visited my mother-in-law.

She has two cats. One of them is a gold cat named pumpkin that has the same slit on his right ear. Coincidence? Possibly. It is also possible that in this area, a small sliver of a notch in the right ear is how some vets do it.

I tried to do a Google search to see what the standard is where I live on the west coast of Tampa Bay, Florida, but I found nothing concrete. I searched Petfinder for cats in my area and found four or five with a tipped ear but none with a notch. So the mystery remains. It doesn’t really matter where Frankie comes from and if I never find out, I won’t care. I just can’t help loving a good mystery.

Do you have a cat that has been notched or tipped? Do you know what is common where you live? I’d like to hear about it.