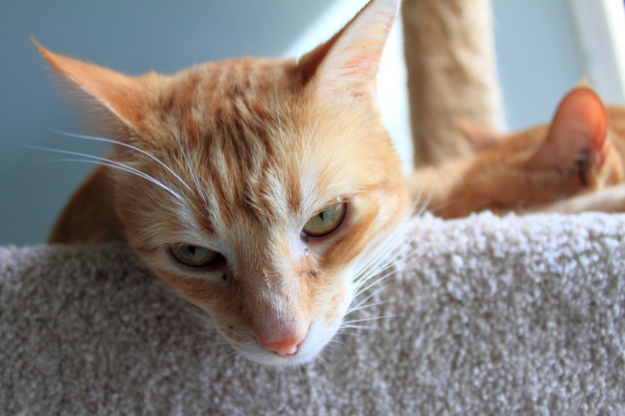 Chris has been sick for almost a week now. By that I mean he has been sneezing a lot. Other than that he seems fine, which is why I thought he was having an allergic reaction to something that is in season now. I no longer think that because Puck started sneezing yesterday and, as far as I know, allergies are not contagious.

It seems Puck may be more affected by this cold (if that is what it is) than Chris is. This morning he got on the bed before I was quite finished making it and lied down where I needed to put the last pillow. I decided to leave him there and let him rest, which he did until we were almost ready to leave for work. That is when Chris jumped on the bed and started bothering him.

“Chris,” Rose scolded, “Leave Puck alone. He doesn’t feel good.” I had to remind her that Chris was sick too but she pointed out that Chris was tougher than the average cat and I couldn’t argue about that. Hopefully they will both get over this soon. I will have to keep a close eye on them and make sure they don’t get worse.