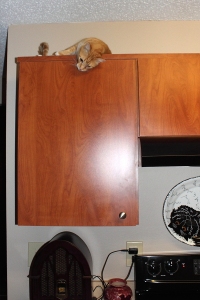 Cats, by nature, seem to like being up high. I suppose it is the predator instinct and it is no more obvious than in a cat like Chris. I mentioned before that he likes getting on top of things and our new apartment seemed like it was built with him in mind.

For starters, our kitchen cabinets do not go to the ceiling so there is a gap above them that Chris loves to get into. he usually jumps on the counter, then to the refrigerator and from there it is an easy step up. Sometimes he will leap from the fridge to the cabinets on the opposite side. I worry that he will miss and hurt himself but so far, so good.

I don’t know how he does this

Then there is the handrail at the upstairs landing, it overlooks the living room and is about 12 to 15 feet above the floor. It is only about an inch and a half wide and I often see him jumping up on the railing.

There is also the china cabinet. He would get up there when we were in the living room watching television. I think he may do that to show us how bad he can be. To get up there he jumps on Rose’s chair, then to the fire-place mantle and then up on top of the cabinet.

Rose tried putting decorations on the mantle and the top of the cabinet to discourage him from jumping up there but he did anyway. Some of the items were breakable and I was worried he was going to break something but somehow he was able to make three jumps in quick succession without disturbing anything. It seemed impossible from my perspective but yet, there he was on the cabinet with nothing out-of-place.

Finally there was the mystery of Rose’s curio cabinet. It is at the end of the hallway with seemingly nothing close enough to use as a springboard, yet Chris still managed to get on top of it. Usually I would hear a loud noise and I would look to see the curio cabinet rocking slightly and Chris sitting on top of it. I was concerned that he might send it crashing down, possibly on top of him.

Fortunately he did not get up there often but each time he did I was baffled by how he did it. It is a jump of well over six feet straight up. Rose concluded he jumped on the dining room table, then to the top of the blinds over the sliding glass door. From there, she thought, he walked to the edge and made the five foot jump to the cabinet. I was not convinced. The ceiling was too close to allow him the arc that he needed.

I finally saw him make the jump out of the corner of my eye one day. He stood on the end of the counter in the bathroom and made the long jump through the doorway to the top of the cabinet. It was just within the range of possibility and Chris had figured it out long before me. I may never have thought of that if I had not seen it. Makes me wonder who the smarter species is.

Did I mention the closet?

When we first got abbey, we soon pinned a nickname on her, “The Topper”, because she would poop and not bury it. She would just leave it on top for everyone to see…and smell. Chris could also be considered a topper because he is always plopping himself down on top of someone, or something. As I write this he just went from bothering me and plopped himself on Abbey who is graciously licking his ears. (Can you tell I am trying to avoid the lay, lie, laid. lain dilemma?)

We feel bad for Chris sometimes because he is like the kid that nobody wants to play with…or nap with. Sometimes we think about getting another hyperactive cat that he can be friends with. That could work or it could be the stupidest idea since New Coke.

Chris’s obsession with being on top doesn’t stop with the other cats. As I mentioned before, he is always on my shoulders, especially right after I get out of the shower. He stands on top of the counter waiting for me. This really makes it hard to dry up, brush my teeth, shave, etc.

He also lies on Rose and I while we watch tv. He’s on me for a couple of minutes, then he moves to Rose, then to me, then off to who knows where and soon the cycle starts over again.

Chris on top of Tigger & next to Alex.

Then there’s the cabinets. He jumps on the counters, then the refrigerator, then to the top of the cabinets. Sometimes he jumps across to the cabinets on the other wall. He likes to lie up there and roll around. I always feared he would roll off and fall.

He also gets on top the China cabinet. He jumps from Rose’s living room chair to the fireplace mantle and then to the top of the Cabinet. After she decorated the mantle with breakable items and put other decorations on the China cabinet, we assumed he could not get up there so he would quit trying. Wrong! He jumps up there like Ricochet Rabbit without disturbing any of the decorations.

He also gets on top of Rose’s curio cabinet. That is six and a half feet tall and too far from anything to jump from. She also has wooden boxes along the top that he almost never disturbs. It was a mystery how he got up there until I saw him out of the corner of my eye. He stands on the bathroom counter and jumps through the doorway. It’s a long jump and I am worried he will bring the cabinet down on top of him someday. Fortunately he seems to have lost interest lately. 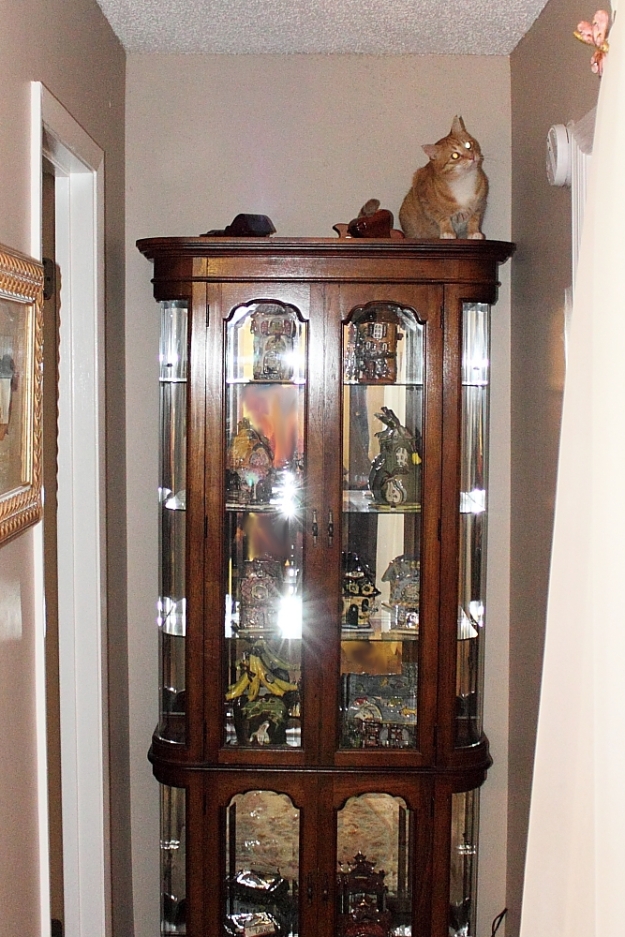