Recently Chris developed a sensitive area on his back. His skin would tighten when we pet him in a certain area. At first, I thought it was like that weird nerve on a dog that causes him to lift his hind leg when you scratch his back but then it started seeming like touching that spot was causing him pain. We didn’t see anything obvious but there was a slight bump under his fur. We didn’t want to hurt him by prodding so we decided to make an appointment at the vet for Saturday.

On Saturday morning, I brought in the cat carrier and opened it up thinking that Chris would walk right in. He was about to do that but Frankie beat him to it. Once Frankie was out I was able to coax him inside by sticking my finger through one of the holes and making noises. I brought Chris outside and put him on Rose’s lap in my car and we drove the three minutes it took us to get to the vet. Chris didn’t seem to mind the trip. He can be an adventurer sometimes.

Once inside the little room at the vet’s office, I opened the cage and expected him to get out and go exploring, but he didn’t, he just stayed in the carrier. That worried me a bit because that is definitely not Chris Behavior. Normally he would be out inspecting every inch of that office. 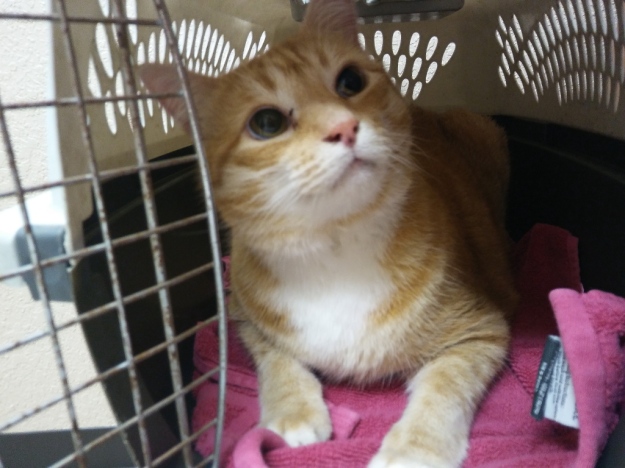 The vet tech came in and said it would be a while because an emergency walk-in had just come in. We asked her if there were any treats and she brought back a handful wrapped in a paper towel. That did the trick. I put them down in front of Chris and he was out in an instant. 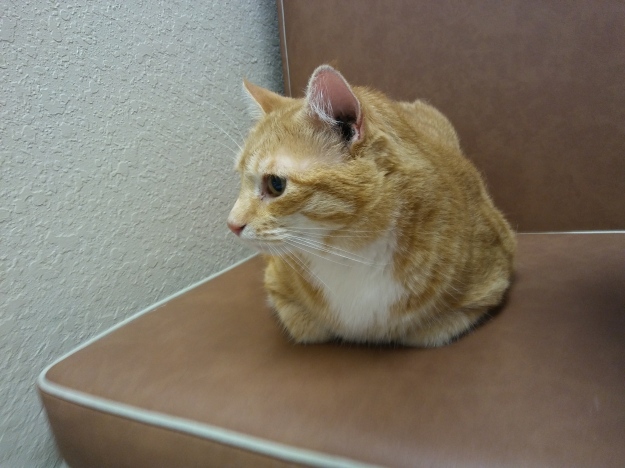 The vet tech came back and weighed Chris and looked at the spot we were talking about and said it looks like flea dirt. We asked, “What’s flea dirt?”  She said another word is “flea poop.” She said fleas like to congregate in certain areas on a cat and one of them is the lower back. She got a flea brush and started brushing him and found two or three live fleas. 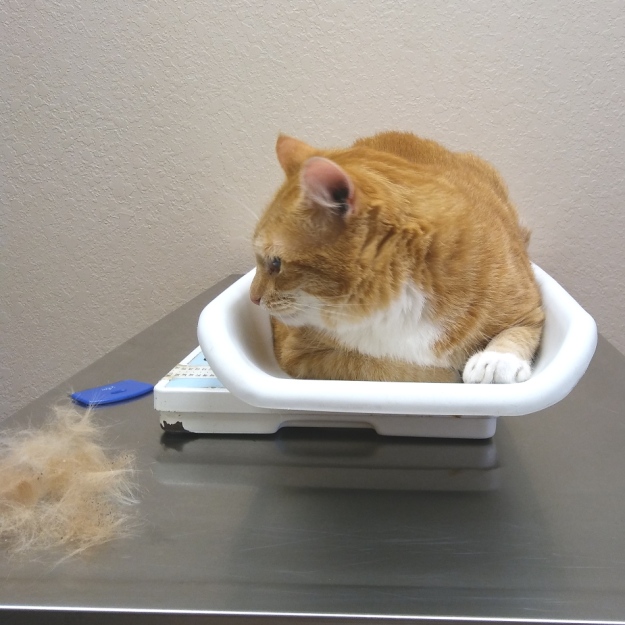 We then talked about treatment options and decided to just use the Activyl that we had already purchased but we’re behind schedule on applying to our cats. She asked if we still wanted to see the vet or should we just call it a tech visit? We said we didn’t need to see the vet now so she left and we tried to put Chris back in his carrier. He did not want to go back inside and made it very difficult for us. When we checked out they didn’t even charge us for the visit. They just charged us the $5 for the flea comb that we had bought that was totally unexpected and a pleasant surprise. We were expecting to spend another $200 at the vet.

20 thoughts on “Chris Visits the Vet”