I have been buying our cats the same canned cat food for a few years now, Earthborne Hollistic’s Chicken Catcciatori, but I have been wishy washy about choosing a good dry food. Lately I settled on the Earthborne Hollistic’s brand but a few weeks ago the store was out of it so I bought another brand that happened to be on sale during the month of January. What I bought is called Whole Earth Farms Grain Free Recipe with Real Chicken.

I soon discovered there is a major problem with this food. The cats like it way too much. In a similar situation many years ago, our cat Tigger almost died because I bought a new food that was too good. He ate so much food so fast that a clump of it had become stuck in his esophagus and he was having trouble breathing (see story here). We had to find an emergency vet open at night. The difference between then and now is that the food I bought back then was a much lower quality. It should be noted here that I was not paid nor did I get free or discounted food for talking about this product (although I am an Amazon affiliate). 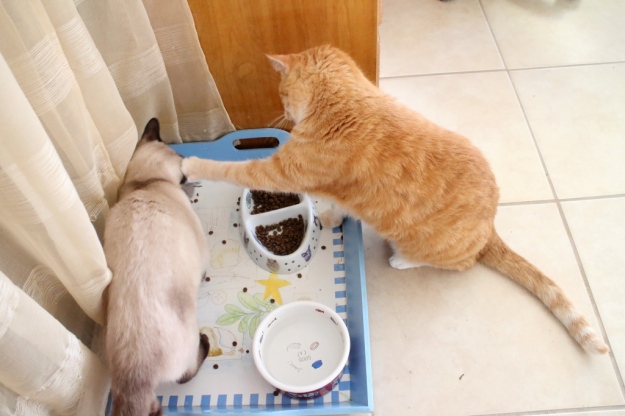 I don’t worry so much about another vet visit but I do worry the cats will get fat(er) eating so much food. I did buy a second bag hoping that they would get used to it and like it less, but that hasn’t happened yet and the bag is almost gone. Since I already let their food bowls remain empty for parts of the day, I think I can get around the problem buy not giving them more food They will just have to deal with having empty bowls for longer parts of the day. Another possible solution is to try a different flavor that they might not like as much.  I could also go back to the last food I gave them. What do you think?

8 thoughts on “Cat Food Too Good to Buy”