We have always joked that Chris has to be the alpha in the house. The truth is, cats are not like dogs, there is no “alpha” cat in the wild, at least not among African Wildcats, the species that evolved into the modern domestic house cat.

African Wildcats are loners, especially the males. Each male has a single territory that does not overlap another male’s territory but may overlap several females’ territories. This may cause competition for mating purposes but there is no group that requires a leader.

About 12,000 years ago in the Middle East, humans started to give up their hunter-gatherer lifestyle and became farmers. This, of course, was a very gradual process but eventually there were communities of people growing wheat and other grains. They stored these grains in large bins that attracted rodents. The increase in rodents, in turn, attracted cats.

The humans not only tolerated the cats, they welcomed them. Cats were an almost perfect solution to the rodent problem but having several cats in the same area was a bit unnatural. I don’t know how they got along back then but over time they evolved to tolerate each other as well as humans.

Our domestic cats today have never developed the hierarchy or cooperation found in a pack of wolves, but they can live together in large groups that are not related without killing each other. Some even develop friendships with each other. I have noticed that male cats seem to get along better than female cats but that is the opposite of what happens between wild cats. I have also noticed that a lot of fighting happens between periods of calm.

Understanding what drives social behavior in cats is a complicated issue that I don’t come close to understanding. Chris’s behavior is a good example. He is always trying to be the dominant, or alpha, cat in the house, but since cats don’t have alphas, I’m not sure what he is thinking. Frankie does not let Chris dominate him, which is sometimes a source of tension. Puck is the submissive one and I sometimes feel bad because Frankie is always chasing him around the house in what may, or may not, be play.

Chris is different. He will show Puck plenty of affection most of the time but occasionally he will grab the back of his neck and hold him down. I try to break it up but Chris won’t let go. I have to pry his mouth open. On several occasions, I have even seen him standing over Puck, with two legs on the left and two on the right, dragging him by the neck across the floor. A short time after that he will lie down next to Puck and wash his ears. 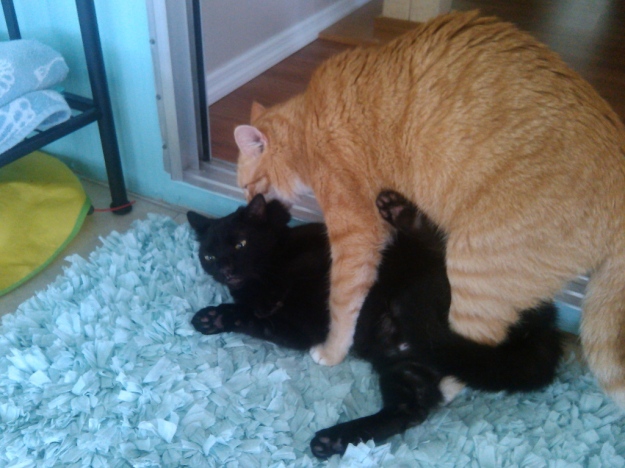 I have heard that pinching the scruff of a cat’s neck will produce a calming affect. Perhaps it is necessary as a kitten so the mother can carry her young without them struggling and it just remains through adulthood. I’m not sure why Chris would want to calm Puck down. He is already submissive to Chris. Perhaps it is just a friendly reminder that Chris is the boss.

What do you think? Do your cats do this?

18 thoughts on “The Dominant Cat”