When we first looked at our new place we were not able to see inside because someone was still living here but we did look at it from the outside and liked the fact that it had an enclosed patio. It was fully enclosed, which is not as good for the cats as just screened but we thought we could open the windows for them and they would be happy.

When we finally were able to meet with the Realtor we discovered that he listed the wrong address and the unit for rent was actually the one next door, which had no enclosure on the patio at all. In addition, the 1100 square feet turned out to be more like 850. That was very disappointing because the location was fantastic and it was very difficult to find a rental in an area that we liked.

This is what our patio looked like when we first saw it. To the left was the unit that was listed by mistake.

When we were finally able to look inside, we liked what we saw but we told the Realtor that for the high rent we would be paying, we would need to have the patio screened. The cats would not have been happy cooped up inside. We later learned that the owners agreed and two days after we moved in we had a new, screened-in patio. 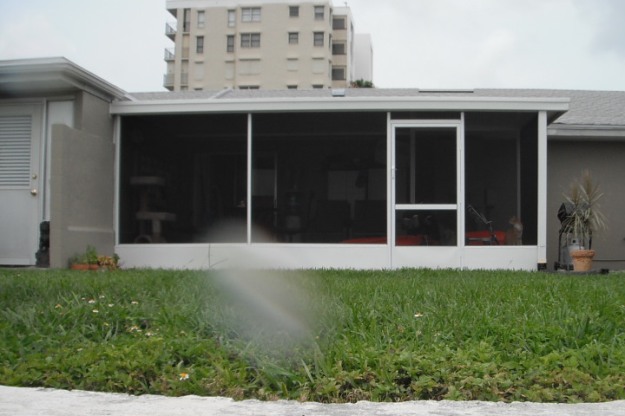 Our new screened-in patio – Notice Chris to the far right.

Once the patio was enclosed we put our cat door on the slider and the cats were able to go in and out at will, even when we were at work, which was not possible before because we could only lock it from the inside and since we had to leave through that door we had to keep it unlocked. We didn’t want someone coming by and letting the cats out so they were forced to stay inside all day.

Coincidentally, we lived in the building in front of Chris two years ago.

Now they can come and go 24 hours a day, which is a real treat. They also have a much bigger patio to enjoy. In addition, we now live next door to a marina and there is a lot of activity for the cats to watch, There is also plenty of birds that make an appearance, especially an egret that must have been fed by the former tenant. 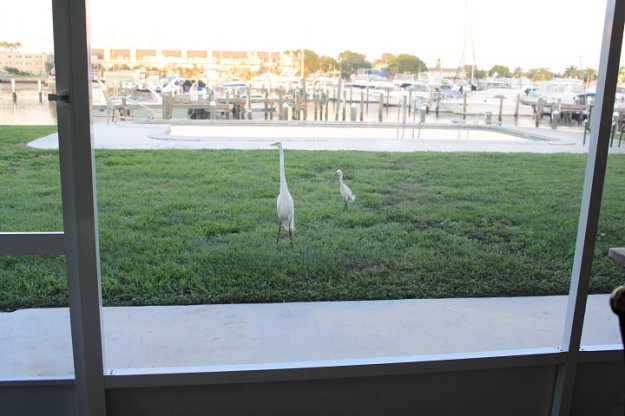 On another note, the bird that laid her eggs just outside our front window on the day we moved in sat on them for almost two weeks until Rose noticed on Friday morning that the nest was empty except for two eggs that were broken open. We think that a predator attacked the nest. Too bad; we were looking forward to seeing little chicks outside our window.